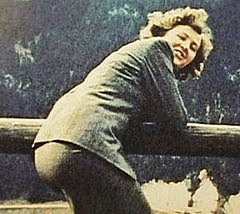 The official cause of Geli's death was recorded as suicide, but the evidence suggests that she was murdered.

The bullet had entered above the heart and lodged in her lower back at hip level, meaning the gun had to be pointing downwards and the hand holding it higher than her heart - a strange way to commit suicide.

None of Hitler’s servants admitted hearing a shot but they soon began to contradict themselves. Three different people claimed to have broken down Geli’s door. (1)

It was reported that her nose had been broken and there were several other injuries. It was also rumoured that she was pregnant, and if it's true that Hitler was impotent, the baby wouldn't have been his. This was definitely a scandal they didn't need when the Party was on the verge of gaining power.

Geli was given a Catholic burial, even though to bury a suicide in hallowed ground was against church rules. The priest, Father Johann Pant, wrote to a French newspaper in 1939: “They pretended she committed suicide. From the fact I gave her a Christian burial you can draw your own conclusions.”

Hitler said he was 100 miles away in Nuremburg when he heard the news of Geli’s death, but at least one police investigator believed he was in the flat when the fatal shot was fired. He wanted to charge Hitler with Geli’s death but was overruled by
pro-Nazi officials.

FRITZ Gerlich, a German journalist, claimed that, instead of leaving that Friday, Hitler had dined with Geli in a restaurant and that Hitler, who seldom touched alcohol, drank beer. When they went back to the apartment, there was a row and he shot her. (1)

Whether he actually murdered her or not, her death had a devastating affect on him, though he would soon replace her with another niece, Eva Braun.

Cleaning up the Mess

Between June 30 and July 2, 1934, the Nazi regime carried out a series of political executions which became known as the Night of the Long Knives. At least 85 people died during the purge, including the Strasser brothers, their lawyer, who held their private papers, and Father Bernhard Stempfle. Problem solved.

Adolf Hitler was just a man. A sado-masochist and sociopath who was guilty of incest. He was not a hero or even a great leader. He attempted suicide after the Beer Hall Putsch and again after Geli's death. Ironically, it was Gregor Strasser who talked him out of it the second time.

The problem with making him the embodiment of the Holocaust and the Nazi regime, is that he alone shoulders the blame. And because of the Holocaust he has earned a hero worship from haters, past, present and future.

He had a lot of people pulling the strings for this movement and they made him appear all powerful, when in fact he was a weakling. But he had the best propaganda machine in history, led by Joseph Goebbels, the man who would engineer his every move.