Chapter Ten Continued: Heeding the Call of the Fatherland 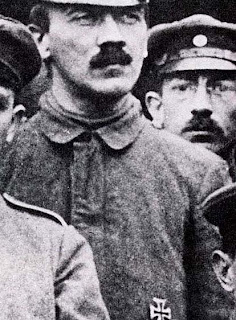 A CULTURE OF DEFIANCE: History of the Reform-Conservative Party of Canada
After avoiding mandatory military service in Austria for three years, Adolf decided he might as well report for duty. He had failed as an artist, though he didn't see it as failure, only that his talents hadn't been recognized.

However, when he went for his physical, they told him he was far too frail to be a soldier.

So he instead went to Munich, then 25 with few prospects. But he was there when war was declared and he was ecstatic. The fatherland was calling him, and all the familiar pan-German passions returned.

So he joined the 16th Bavarian Reserve Regiment, and would see service in France and Belgium. His duty was as a trench runner on the Western front, where he was often exposed to enemy fire. He was injured twice thus twice awarded for bravery.

Most of his comrades found him 'weird' and were often uncomfortable around him, so a job where he moved constantly satisfied everyone.

And when he did engage in conversation, it was usually just to quote from Schopenhauer, the German philosopher, who was now an obsession. (1)

Ironically, the one man who would have appreciated the quotes, and could add his own, was Leo Strauss, though how much of Hitler's knowledge was philosophical, and not just memorizing the comments on the superiority of the white race, is debatable. But he would later state that his time in the army during the Great War were the best years of his life*.

He participated in a number of major battles, including the First Battle of Ypres, which became known in Germany as the Massacre of the Innocents, so named because most of the German casualties were young and inexperienced. Approximately 40,000 of the nine infantry divisions were killed in 20 days, and Hitler's own company of 250 was reduced to 42 by December.

Konrad Heiden suggested that Hitler's recount of the tale to a friend, suggested that he was rather casual when relaying the details, but John Keegan, believes that the experience drove Hitler to become aloof and withdrawn for the remaining years of war.

He was recovering in hospital from the effects of mustard gas, that temporarily blinded him, when he got the news that Germany had surrendered, and asked "They died for this?" He would later believe, as many did, that Germany had been stabbed in the back (2) by "the enemy from within."

*Resistance activist, Ruth Andreas-Friedrich, kept a journal between 1938 and 1945, and in her entry for November 13, 1938, she shares the story of a Jewish man who had been taken by the Gestapo and released.

... Finally they took us to the courtyard, and made us form in ranks of fifty. Nobody knew whether they were going to shoot us or release us. We stood and waited, heels together, hands at our sides. Finally somebody in uniform appeared ... He went clanking along the ranks, and yelled, "World War officers front and center!'

Thirteen of us came forward ... "What regiment, wounds, decorations?" There, were nine with the Iron Cross first class. The man in uniform stands there and gives a searching look, folds his arms, and shouts, " The first seven fall out, get out of here, quick. The others get back in the ranks." I was the seventh man. We didn't dare look at one another. We never glanced back; we slunk out like traitors. (3)

Was this a customary thing? Was the Iron Cross, wounds or 'decorations' the proof needed that those men fought for their country? And why were only seven of them released, and not all thirteen? I guess to find the answers, you would have to get inside the head of a mad man.