Chapter Twelve: The Aftermath of War

Throughout the war years, William Aberhart became a Christian soldier, engaging in battles with church leaders, while drawing an army of devout followers to his own brand of dispensationalism.
His Bible classes were extremely popular and it was about this time that he came in contact with Professor William Tucker Broad, a dispensationalist and follower of reverend Ethelbert William Bullinger (1837-1913). As with many of his relationships, he and Broad would eventually part ways, with the latter by way of explanation saying: "Mr. Amberhart's doctrine is absolutely sound, but he simply doesn't know how to work or co-operate with others, and he doesn't know the meaning of the word 'love'" (1)

But while Broad may have departed, William Aberhart became obsessed with the teachings of Bullinger, described as an ultradispensationalist*

As a man who liked to control things, he must have felt powerless during the war years, and even more so after the war. Many young men did not return, and for those who did, they faced unemployment and economic hardship. On the heels of that was the Spanish Flu epidemic, that resulted in close to 4,000 deaths in the province.

And he may have seen these events as proof that the end times were imminent, as he became consumed with prophesy and even more erratic.

On October 8, 1920 Aberhart advertised his next day's Bible class under the heading "Is the Millennium at Hand? or the Latest Freak in Prophecy Examined" The announcement went on: "Will millions never die? Will baldheaded men receive hair and toothless women a new issue of teeth in 1925? Should doctors, dentists and undertakers be alarmed? (2) 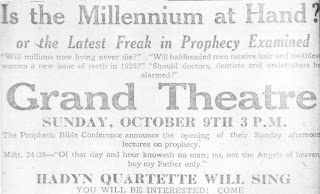 Bullinger's teachings bordered on the occult and he was a strong promoter of numerology. In his book Number in Scripture: Its Supernatural Design and Spiritual Significance, he writes "The number nine is a most remarkable number in many respects. It is held in great reverence by all who study the occult sciences; and in mathematical science it possesses properties and powers which are found in no other number."

And he never let go of his fervour:

Aberhart's private obsessions were behind some of Social Credit's unusual qualities. For all his piety, Bible Bill was an avid student of the occult. Numerology, palmistry and astrology fascinated him, especially their prophetic applications. "The numbers of the Bible are all significant," he wrote to one follower, "five is the number of responsibility and eight is the resurrection or New Order number." He was a student of British Israelism, an anti-Semitic sect that claimed Britons as a lost tribe of ancient Israel who possessed a divine mission in world affairs.**** Despite Aberhart's public disavowal of anti-Semitism, hate-mongering abounded in Social Credit culture, which included teachings imported straight from The Protocols of the Elders of Zion, an early classic of proto Nazi race propaganda. Historian David Elliott noted that much of the intellectual legacy of Social Credit, including the work of its founder, Major Douglas, was built upon anti-Semitic conspiracy theory.

Occultist assumptions echoed within Aberhart's political-evangelical teachings. The "overhead route" to salvation guaranteed to good Christians was parallelled by the mystical technocracy of Social Credit economics: one could be saved from suffering simply by having faith in the system and allowing experts to make decisions. Obsessed with the Devil's ubiquitous presence in twentieth-century politics, Aberhart constructed an alternative history from scripture, including a complicated schedule of prophetic events outlining the imminent arrival of the Antichrist. "Prophecy is History foretold," Aberhart would preach, "History is prophecy fulfilled." More often than not, politics was Satan's domain: dark forces obscured the truth and kept citizens from enjoying full material prosperity. (3)

Aberhart's teachings now encompassed both Cyrus Scofield and Ethelbert Bullinger, and he became obsessed with the politics of the Israelites** and the economics of the New Jerusalem. (3)

The next major milestones in the life of William Aberhart, were the start of his radio broadcasts in 1925, and the building of the Calgary Prophetic Bible Institute.

He used his organizational skills and power of persuasion, both on the air and off, to help raise the necessary funds, and the facility was open for business in October of 1927.

Then in a farmhouse in Rosetown Saskatchewan, two young men assembled a three tube radio that they had ordered through a mail-order catalogue. One of them, began listening to Aberhart's program, and in 1927 decided to study at the Calgary Prophetic Bible Institute.

His name was Ernest Manning, and he would be the school's very first graduate.***

*Ultradispensationalism or hyperdispensationalism, often now called Bullingerism; is described by many dispensationalists as a Pseudo Christian Cult. The late Harry Ironside, who grew up in the tradition of the Plymouth Brethren (See John Darby, chapter one) stated: "Having had most intimate acquaintance with Bullingerism as taught by many for the last forty years, I have no hesitancy in saying that its fruits are evil. It has produced a tremendous crop of heresies throughout the length and breadth of this and other lands; it has divided Christians and wrecked churches and assemblies without number; it has lifted up its votaries in intellectual and spiritual pride to an appalling extent, so that they look with supreme contempt upon Christians who do not accept their peculiar views; and in most instances where it has been long tolerated, it has absolutely throttled Gospel effort at home and sown discord on missionary fields abroad. So true are these things of this system that I have no hesitancy in saying it is an absolutely Satanic perversion of the truth."

** William Tucker Broad also wrote about British-Israelites or British-Israelism and the Lost Tribes. He was a regular contributor to Bullinger's monthly journal Things to Come

*** Another famous graduate of the school was James Keegstra, the Alberta schoolteacher who told his students that the Holocaust was a hoax. He was also a member of the Social Credit Party at the same time as Stockwell Day's Father. The Sr. Day's good friend Doug Christie, represented Keegstra at his trial.