Chapter Fourteen Continued: The Power of the Mustache 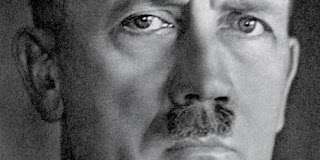 "He is an absolute genius, and he may, says Soloviev, wear a small mustache." Konrad Heiden

When Adolf Hitler joined the German Army, he sported a large mustache. But later, when the German troops were provided with respirator masks, in response to the use of mustard gas by the British, he was told to trim it, so that the mask could be worn properly. (1)

Some men may have simply shaved theirs off, but Hitler instead just clipped the sides until it fit, giving him a rather unusual appearance.

And it was that unusual appearance; of a man with a 'small mustache', as described by Vladimir Solovyov (aka: Soloviev); that led Dietrich Eckart to believe that he had found the Antichrist.

Or had he just found his Antichrist?

And would the most "noble lie" that Leo Strauss so often expounded, be Hitler himself?

Dietrich Eckart and the "Genius Superman" 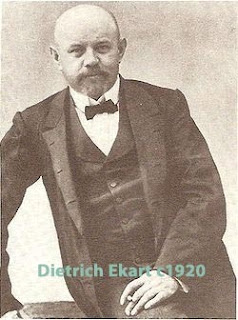 Dietrich Eckart was not an ordinary man. Born into an affluent family in 1868, in the small port town of Neumarkt in Bavaria; he had planned on becoming a doctor.

However, he was a failure as a student, largely due to a problem that would plague him throughout his life. Dietrich liked to drink too much.

His mother had died when he was ten, and his father when he was twenty-seven; leaving him a fairly wealthy young man, but he would quickly spend his way through his fortune.

Sleeping in flop houses or on park benches, he had already developed a morphine habit, and soon found himself in an asylum for the mentally diseased. And it was there that he found his niche. (2)

He began writing plays that he would have the inmates act out, and on his release in 1899, he settled in Berlin; where before long, he developed a reputation as one of the best playwrights in the city.

Back on top once again, his wealth and notoriety allowed him to move in prominent social circles, and he would lead a charmed life for more than a decade.

But during that time he also began studying some of the more controversial philosophers, including Hitler's favourite, and one of Leo Strauss's, Arthur Schopenhauer; and developed a keen interest in races.

Other thinkers of interest to Eckart included Adolf Josef Lanz, who in his 1904 book, "Theozoology", advocated sterilization of the sick and the "lower races" as well as forced labour for "castrated chandals", and glorified the "Aryan race" as "Gottmenschen" ("god-men"). Lanz also published a magazine, which Eckart subscribed to, and would later introduce to his protege.

Angelus Silesius rounded out Ekarts's influences. Silesius had once written; "I am like God and God like me. I am as large as God. He is as small as I. He cannot above me nor I beneath him be." This may have been the inspiration for Ekart's ideology of creating a "Genius Superman."

In 1913, Eckart joined the Thule society, and moved with it in 1917 to Munich. The following year, the original group joined with a more radical one, and the nature of the society changed, becoming more political.

They operated as counter revolutionaries, carrying out targeted assassinations and making life as miserable as possible for the Jewish people.

The new group now included Alfred Rosenberg, who had brought back the Protocols of the Elders of Zion from Russia. Eckart was already putting out an anti-Semitic magazine and was more than happy to include the Protocols.

There has been a lot of speculation about the influence of the Thule society, which often goes into mystical theories; but I think it was just a white supremacist organization, that wanted to protect and promote their concept of a Nordic heritage.

And while they apparently dabbled in the occult, I think their primary interest was eugenics, under the tutelage of the master white supremacist, Houston Stewart Chamberlain.

But more than just being white supremacists, they held that the Aryan race was supreme, and that was the race they were going to engineer to supremacy. But first they had to deal with the Jewish question.

The Protocols of Zion, provided a vehicle for fear mongering, by establishing the false notion of a Jewish conspiracy, plotting to rule the world. And it also gave rise to the belief in the Antichrist, who was described in great detail by Vladimir Solovyov.

And I believe that when Adolf Hitler walked into the meeting of the German Worker's Party, where the playwright and director Dietrich Eckart was speaking, he had just auditioned for a part in Eckart's next play, and he would win the leading role as the Antichrist.