Before 1871, the Duchy of Mecklenberg, was not part of Germany. For centuries it had operated under a system of "Inherited Serfdom", where nobles had complete authority and the only rights of the peasants was the right to pay taxes. They couldn't marry without permission and could even be bought and sold.
In 1806, when Napoleon conquered the area, many of the men of Mecklenberg were conscripted for military service, and almost 2000 lost their lives fighting in Russia for the emperor. During the seven years of French occupation, Mecklenberg suffered poverty and destruction; much of the destruction coming about as a result of the poverty.
In 1820 serfdom was abolished there, meaning that the peasants were freed from their obligations to land owners, but it also meant that land owners were freed from their obligations to the peasants, and many were forced into even greater poverty, hiring themselves out as day labourers, travelling the countryside, plowing, planting or harvesting crops. (1)
This was the Mecklenberg of Sophia's birth.
She would later marry William Eberhardt and in February of 1844, would give birth to a son, who would be given his father's name.
At the time, there were different classes of peasants, with some owning land, but it was still difficult for anyone not of noble birth, as the duchy had not yet caught up with the rest of Europe, where there was a growing middle class.
German Women and German Song
German women, German loyalty, German wine and German song
Shall retain in the world
Their old beautiful chime;
And inspire us to noble deeds
During all of our life.
German women, German loyalty,
German wine and German song!
By the time of William Jr.'s birth, there was a swelling grassroots movement across the German states against the tyranny of the noble landowners, and by 1848, many secret meetings of reform societies were being held, making plans for a political revolution.
Fuelling the passions was the promise of a new pan-German union to challenge the status quo. Tired of high taxes, censorship and the lack of basic human rights, the movement quickly gained momentum.
A banner was created with the colors that would eventually form the present German flag: black, red, and gold; and an official anthem written to the music of Joseph Haydn, was sung by the rebels as they protested in what has been called the March Revolution.
Forced to concede, the ruling elite drew up a new constitution on March 23, 1848, recognizing the need for reform. However, the victors were not fully prepared to share governing, and in Prussia the nobles sued for their 'rights' and the new constitution was annulled in September of 1850. (2)
By that time William Sr. was deceased, possibly killed during the revolution, and Sophia would remarry; a widower 20 years her senior, by the name of Christopher Heffler.
Not long after the hard fought for constitution was annulled, Sophia and Christopher would leave Mecklenberg, to become part of a mass emigration of what came to be known as the Forty-Eighters (3). Ranging from doctors, lawyers, musicians and painters; to tailors, farmers, cap makers and labourers; all gave up their fight to find their place in their homeland and would now just seek a new one.
In some cases, money was actually put up by noble landowners, believing that the best way to get rid of the peasant problem, was simply to get rid of the peasants.
Rough Seas and New Battles 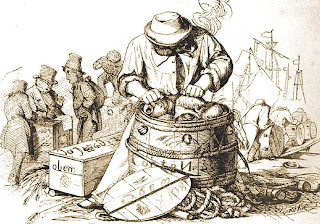 This increase in emigration naturally brought about an increase in the need for emigrant ships, and for those not fortunate enough to be able to afford higher priced tickets, they were often left at the mercy of unscrupulous ship owners and agents.
There were constant complaints of overcrowding, poor food, abuse, and of course disease; prompting the cartoon above, showing children being stuffed into barrels (4).
We can only imagine the conditions for Sophia and her family. Obviously not part of the upper class, since her son William would grow up never being able to read or write, the voyage was probably spent in steerage, which wouldn't have not been much better than being stuffed into a barrel.
However, things would get worse when they became shipwrecked off the coast of Newfoundland, and before the crew would allow them into the lifeboats, they would have to hand over all of their money and possessions. (5)
Thus the Heffler family would arrive penniless as they made their way up the St. Lawrence to Hamilton. Given their circumstances, they were offered settlement in Tucker-Smith township, an area that had been very slow developing, mainly due to the horrendous travel conditions.
The family would then continue their journey, along those horrible roads in an oxcart, where a seven year old boy, who had seen enough adventure to last a lifetime, would no doubt wonder what life now had in store.
Continue to Chapter Three: Secret moves
Sources:
1. History of Mecklenberg, By: Ros Davies
2. Germans and the Revolution of 1848-1849, By: Justine D Randers-Pehrson , 1999, ISBN: 082044118X
3. German Corner, by Klaus Wurst and Norbert Muehlen, Davitt Publications, 1996
4. From Die Reform, Nr. 46, 1848, S. 184 (Hamburg)
5. Bible Bill: A Biography of William Aberhart, By: David R. Elliot and Iris Miller, Edmonton: Reidmore Books, 1987, Pg. 2
Posted by Emily Dee at 4:04 AM