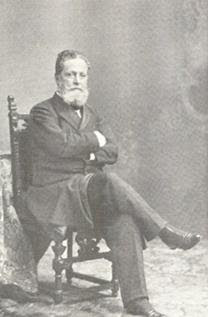 While Hitler and his friends spent much of their time on the streets of Vienna, another regular on those streets was the mayor, Karl Lueger, who was the leader of the Christian Social Party.

It soon became apparent that especially in Vienna any political group that wanted to appeal to the artisans had no chance of success without an anti-Semitic platform. It was at that time that a well-known phrase was coined in Vienna: "Anti-Semitism is the socialism of fools." The situation was exploited by the Catholic politician Karl Lueger, the leader of Austrian Christian-Social party. In 1887, Lueger raised the banner of anti-Semitism. (1)

So it's quite possible that with Lueger, his prejudice was mostly political, but he did draw in a large number of supporters from all levels of society.

A much greater development was that of a second anti-Semitic movement embracing the mass of the German petty-bourgeoisie and parts of the working class ... in Vienna: this was the Christian Social Party, led by an intellectual who had arisen from modest circumstances: Doctor Karl Lueger. A strong personality, a powerful tribune of the people, a party despot who made him-self the all-powerful mayor of Vienna. Young Hitler admired him greatly, handed out leaflets for the Christian Social Party, stood on street corners and made speeches. (2) 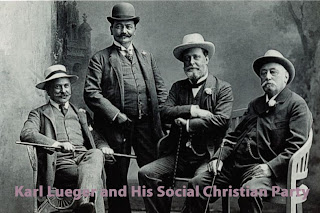 Adolf became a fan and would often campaign for the popular mayor, standing on street corners, barking out anti-Semitic rhetoric, before returning to his Jewish friends.

How he could do that was pretty simple though. One was personal and the other was politics.*

And he learned a few lessons from that experience, though not all from the party he supported, but from those he challenged.

What he witnessed there, was not the organized campaign, complete with marching bands and scripted rhetoric; but the passion of a growing political movement of workers. And most of the leaders of these groups were university educated intellectuals. But not just any intellectuals ... Jewish intellectuals. The reason being that while they were qualified to be judges or government workers, they were not allowed, because those jobs were often forbidden to them.

Later, he would try to figure out how to find non-Jewish intellectuals, capable of inspiring the kind of passion he saw in the faces of the proletariat. And that opportunity would present itself, in the aftermath of war.

And on the Other Side of Town

When Adolf Hitler arrived in Vienna to hone his artistic "talents", a young lad from that city was also trying to find his place.

Known to his family as "Fritz", he was tall and gangly, and often described as "untidy". And while a disinterested student, was extremely bright and an avid reader. (3)

Like Adolf, he was told he couldn't draw and as a result was sent to a lesser school. But drawing was not part of his desired vocation, not that he really knew what that might be then.

However, he would not have experienced life on the Vienna streets, or spent time in flop-houses. His father was of a minor nobility and his mother a member of the upper-class bourgeoisie. He never knew hunger or had to cringe from an abusive father.

He led the lifestyle of the privileged and was influenced by the intelligentsia of Viennese society.

And while Adolf was running messages from trench to trench for the Bavarian army, during the war; Fritz was in an aeroplane, acting as a spotter for the Austro-Hungarian Army. The same army that Adolf had wanted to join but was turned down for being too frail.

When the war was over, a very grown-up Fritz decided to pursue an academic career, and vowed to work for a better world. As he would later say: "The decisive influence was really World War I. It's bound to draw your attention to the problems of political organization."

Most people know "Fritz" better as Friedrich August Von Hayek, and he has been called the man ".. who snatched the Conservative Revolution from the jaws of defeat" (4) and was the inspiration of among others: Margaret Thatcher, Ronald Reagan and Stephen Harper.

*It never ceases to amaze me, how people can be openly anti-Semitic, yet claim it has nothing to do with the Jewish people. William Aberhart could lash out at them from the pulpit, but when confronted would claim that he was not prejudice, genuinely believing that he could separate his 'Biblical beliefs' from his humane beliefs. The late Reverend Jerry Falwell, after claiming that the Antichrist was a Jew, defended his position by saying that many of his friends were Jewish and he loved Israel.

And now as Stephen Harper and Jason Kenney, have become two of the most pro-Israel men on the planet, even shaping foreign policy to appease the Christians United for Israel crowd, they believe that they are the best friends the Jewish people ever had. This despite the fact that if the prophesy is fulfilled it will have devastating results for the 'Israelites'. It is a strange world indeed.

4. The Legacy of Friedrich von Hayek: Fascism Didn't Die With Hitler, by Jeffrey Steinberg, The American Almanac, September 23, 1995
Posted by Emily Dee at 10:38 AM