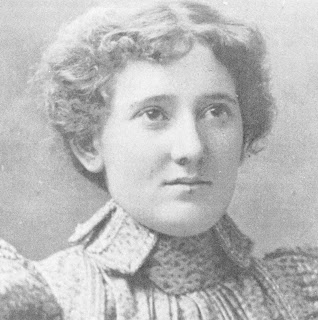 When William Aberhart first arrived in Brantford in 1901, he boarded at the Scott Residence, with Thomas and Mary Scott and their six children.

Most of his time was spent either in the classroom or with his religious studies, taking little time out for a social life.

However, that would change when he met Jessie Maria Flatt at a football game. The family story is that she pursued him, believing that as a teacher he would be a good catch.

Jessie was the daughter of George Flatt from Scotland and Jennet Clarke, who hailed from New Brunswick. Her father had arrived as a young immigrant and in 1871 his occupation was listed as a 'Farm Servant'. However, at the time of the next census in 1881, he was married and had a small farm of his own.

I don't think the family was very prosperous, and I suppose to the 23 year-old Jessie, she saw this as a way out.

I don't know if they had much of a home life. It would appear that William was rarely there. Jessie never shared his religious beliefs, and always preferred social outings. However, her husband's fundamentalism denounced those things. He disapproved of theatre-attendance, card-playing, drinking, and smoking. (1)

Throughout their marriage, they seemed to live separate lives. Later Jessie would become involved in all the right societies and it was said that she had a fondness for jewelry and furs. I'm not criticizing her for this, because it must have been tough.

Given Aberhart's temper and impatience, it must have spilled over to home.

Besides, William himself always liked the finer things, dressed well and even throughout the Depression, drove a flashy car. He never took a vow a poverty.

Chapter Seven: The Schicklgrubers of Austria