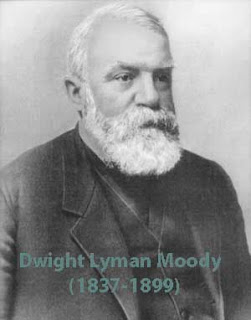 Dwight Moody, who was more commonly known as D.L. Moody, was a very successful evangelical leader and regular attendee of the Niagara Bible Conferences.

His father died when he was young and his mother struggled to bring up seven children, eventually being forced to send several of them away. At the age of 17, Dwight moved to Boston to work in an uncle's shoe store, but the stipulation for employment was that he must go to church.

This set him on a career path that would span several decades, and he would found the Moody Church, the Northfield Mount Hermon School in Massachusetts, the Moody Bible Institute and Moody Publishers.

But before reaching that pinnacle of success, he spent many years in the trenches, ministering to the poor and less fortunate.

At the outbreak of the Civil War, Moody became involved with the U.S. Christian Commission of the YMCA, and would continue to build the organization after the war. In the spring of 1872, he travelled to England and Scotland, where he spoke to sold out crowds, and it was here that he came into contact with the Plymouth Brethren. 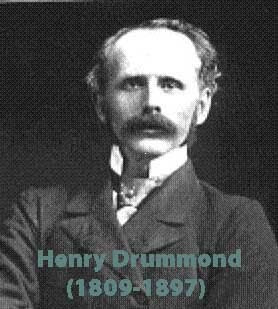 While touring Scotland in November of 1873, D.L. Moody was assisted by a fellow evangelist, named Henry Drummond, a member of that Plymouth Brethren.

Drummond's work was important because he combined scientific studies with scripture, which was just what they needed to help battle against the discoveries of Charles Lyall and Darwin.

But more importantly, Drummond was the son of the late Henry Drummond Sr. who himself had been an Irvingite. He had also worked closely with John Nelson Darby, and it is believed that he financed Darby's speaking engagements as he travelled throughout the United Stated and Europe, selling dispensationalism. (1)

Moody and Drummond would create a powerful team for the next leg of this spiritual journey.

Cyrus Ingerson Scofield was born on August 19, 1843 in Michigan. His mother died in childbirth and his father remarried. When the Civil War broke out, despite living in the North, Cyrus joined the Confederates. Not much is known about him until he shows up in St. Louis.

At the time, the city was the hub of the fur trade, run by the French, including many French-Canadians. This was when he met Leontine Cerre, whose family was from Montreal, and they were married on September 21, 1866. Since Leontine was a Roman Catholic and Cyrus was not, the wedding ceremony took place before a Justice of the Peace.

Meanwhile he was working for his brother-in-law, Sylvester Papin, who was president of the St. Louis Board of Assessors, where he trained to be a lawyer. It was here that he became familiar with grants, titles, deeds and conveyances. In 1869, he moved with his family, which now included two daughters, to Atchison Kansas, where they appeared to be living a pretty lavish lifestyle.

He was still involved in land claims, eventually going to work in the law office of John J. Ingalls, and it was Ingalls who sponsored Scofield's admission to to the Kansas bar.(2) 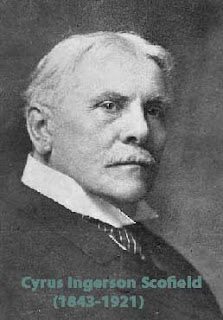 After getting elected to the state legislature, at a time when they appointed senators, Scofield managed to get his friend named to represent Kansas in the senate. Shortly after, Ingalls returned the favour by convincing President Grant to appoint Cyrus Scofield to the office of United States District Attorney for the district of Kansas.

However, it was soon learned that the new DA had been involved with some questionable land deals that included blackmail, so Cyrus resigned his position and fled to Canada, where there was no record of him for about three years. (3)

By 1877, he was back in St. Louis, making a living on swindles and schemes and writing bogus cheques. He was caught and thrown into prison.(2) However, after supposedly being "witnessed to" he became "born again" and emerged from jail (early) with a new religious calling. However, not everyone was convinced that this conman was on the level:

“Cyrus I. Scofield, formerly of Kansas, late lawyer, politician and shyster generally, has come to the surface again, and promises once more to gather round himself that halo of notoriety that has made him so prominent in the past. The last personal knowledge that Kansans have had of this peer among scalawags, was when about four years ago, after a series of forgeries and confidence games he left the state and a destitute family and took refuge in Canada. For a time he kept undercover, nothing being heard of him until within the past two years when he turned up in St. Louis, where he had a wealthy widowed sister living who has generally come to the front and squared up Cyrus’ little follies and foibles by paying good round sums of money. Within the past year, however, Cyrus committed a series of St. Louis forgeries that could not be settled so easily, and the erratic young gentleman was compelled to linger in the St. Louis jail for a period of six months.

“Among the many malicious acts that characterized his career, was one peculiarly atrocious that has come under our personal notice. Shortly after he left Kansas, leaving his wife and two children dependent upon the bounty of his wife’s mother, he wrote his wife that he could invest some $1,300 of her mother’s money, all she had, in a manner that would return big interest. After some correspondence he forwarded them a mortgage, signed and executed by one Chas. Best, purporting to convey valuable property in St. Louis. Upon this, the money was sent to him. Afterwards the mortgages were found to be base forgeries, no such person as Charles Best being in existence, and the property conveyed in the mortgage fictitious.” (4)

However, the new and improved Scofield was about to embark on the biggest con job in his illustrious career.

James H, Brooks, as I mentioned before, was the man who was behind the Niagara Bible Conferences. Brooks had met John Nelson Darby on one of his visits to the United States and had become a devout follower of his dispensationalist theories, and the doctrine developed by a Jesuit priest named Manuel de Lacunza.

In 1801, Lacunza had written a book, The Coming of the Messiah, under a Jewish pen name; Juan Josafat Ben-Ezra. Rev. Edward Irving had the book translated into English from the original Spanish in 1827, and this book became much of the foundation for his doctrine, that was followed by the 'Irvingites'.

Darby had actually used this work for his own preaching, giving credit to Lacunza, but was told that he would have to stop. If Brooks was going to be able to pull this off he couldn't include the Jesuits.

So at the Bible conference of 1877, Brooks introduced his new protegee to J.L Moody, a man with a lot of prestige in the evangelical community. Without knowing of his shady past, Moody named Scofield as secretary of his YMCA, and they would remain close, with Scofield even officiating at Moody's funeral.

But what did Brooks want with Scofield?

At the time there were several wealthy Jewish Americans, who wanted a place in the religious awakenings. Through Scofield's old friend, John Ingalls, himself Jewish, he was introduced to several of these money people, including Samuel Untermeyer, a prominent Jewish lawyer, whose clients included the Rothschilds, and oil baron Lyman Stewart, whose company later assumed the name Unicol.*

These are the people who put up the money for the Scofield Bible**, which became the basis for a Judea-Christian heritage, which is now referred to as Christian Zionism.

Eventually the Niagara Bible Conferences were cancelled due to lack of interest, mainly it was said because they had focused too much attention on dispensationalism and not enough on Christian fundamentalism.

I felt it was very important to spend a bit of time on the religious background of this movement, because William Aberhart embraced all of this, and it became the foundation of what I refer to as the Reform political movement, that culminated in the election of Stephen Harper and his newly created Conservative Party of Canada.

From a Scottish cult based on the writings of a Jesuit Priest, to the dispensationalism of John Nelson Darby, to the Christian fundamentalism created by the Niagara Bible Conference, and finally to the creation of Christian Zionism by a conman named Cyrus Scofield.

And just as these high profile evangelical leaders got together to dispute scientific claims, so too does our current government. Our Science Minister, Gary Goodyear, is a creationist. I think that says it all.

* Hamid Karzai, the president of Afghanistan, is a former employee of Unicol. According to Eric Walberg of Middle East on-line, "... Karzai himself was a member of the Taliban government from 1995-98, before Unicol hired him as an insider to try to clinch an oil pipeline deal." Many people believe the War in Afghanistan is really about those pipelines.

** The Scofield Bible would be the inspiration for evangelist Tim LaHaye's immensely popular Left behind series. LaHaye was the man behind the formation of the Moral Majority/Religious Right movement in the United States. LaHaye was also one of the founders of the Council for National Policy, where Stephen Harper gave his 1997 speech that surfaced during an election campaign, and many believe saved Canada from a Harper majority in 2006.

1. The Life and Work of Prof. Henry Drummond, by Rev Finlay Stewart

3. The Incredible Scofield and His Book, By: Joseph Canfield, Ross House Books, 1988

4. Cyrus I. Scofield in the role of a Congregational Minister, The Daily Capital, Topeka, Kansas, August 27, 1881