From the Heidelberger Platz onward, the streets were black with people. A great excitement lay upon them. The tension grew. People thought they heard distant drum-beats. A wave of shouts rolled along the streets. The stewards formed a chain to hold back the mass of people. And now the trumpets were indeed approaching.

And then came the sight that caused many in the crowd to weep. Men as well as women, moved by a feeling of humanity's common fate, remembering the long war and all the dead. Did the people see the troops? They were looking at the long war, at victories and at the defeats. Before them a piece of their own life was marching past, with wagons and horses, machine-guns and cannons. (1) 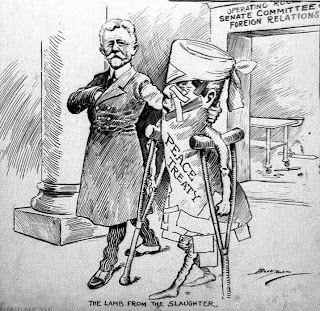 The joy at seeing the troops return from war in Germany was bittersweet, beause unlike the allied forces who would at least be going home victorious, Germany had been defeated. The Empire had lost more than two million to battle and disease, with another four million injured.

And they now had to deal with the humiliation of the victors claiming the spoils, not only in forced reparations but in the de-militarization of the country, as foreign soldiers now sought out and confiscated most of the means for the country to defend itself.

Armament factories were closed, throwing people out of work and many of the returning soldiers were forced to go on relief.

And as despair turned to anger, they began looking for someone to blame. In the beer halls talk turned to the "enemy within" and "being stabbed in the back", and a new enemy of "traitors" emerged. And to fight the traitors they began to stockpile weapons, "rescued" before the allied victors could take them and hidden in safe spots.

The struggle was nourished on a wild hatred from man to man.

No quarter was given, no prisoners taken. From a dark thicket in the Black Forest, Erzberger, the minister who induced Germany to sign the Treaty of Versailles, was shot. One night a few young men swore a mortal oath over their wine and beer; next morning, feverish and overwrought, they drove out in a car, overtook another car, and shot Minister Rathenau with an automatic. Deputy Gareis planned to attack the army of secret murderers in the Bavarian parliament; the night before the session he came home late. As he was opening the door, two shots rang out in the darkness. Gareis was dead, his murderers were never found.

Men vanished without trace; how many corpses the woods concealed can only be guessed; a woman was found dead at the foot of a tree, over her head a note was pinned with the words: 'Lousy bitch, you've betrayed the fatherland. So you are judged by the Black Hand.' One Pohner was president of the Munich police, a brilliant official, an extraordinary jurist; later he became a judge of the highest court in Bavaria. Someone said to him that beyond a doubt there were organizations of murderers at large. With an icy glance through his pince-nez, Pohner, the judge, replied: 'Yes, but too few!' (2)

This was the new Germany and this was the Germany where Adolfus Hitler, grandson of an unwed peasant girl, would find his true calling.