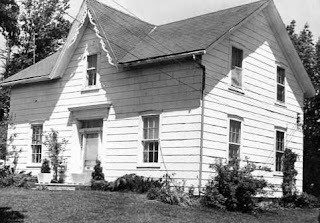 William Aberhart Jr. was born on December 30, 1878 (1), in Hibbert Township, Perth County, Ontario; the fourth child and third son of William Sr. and Louisa (Gourica) Pepper. His family owned a rather large and prosperous wheat farm, and were not terribly sociable, so Williams' early years would be spent there with siblings.
He first attended school at Hibbert #7, a one room schoolhouse, but at the age of eight, the family moved closer to town so that their eldest children would have an opportunity to attend high school. The remainder of William's elementary school days would be spent in Egmondville.
By this time, the town had a gunsmith, cobbler, weavers, blacksmiths, a woolen mill, tanneries, several general stores, a cider mill, at least five hotels, a brewery, ashery, pottery, sawmills, gristmills, a brick and tile yard, cabinet makers and an undertaker, a German Lutheran as well as Presbyterian Church, a schoolhouse of course and a post office.(3)
His paternal grandparents were both deceased, though their history was woven into the tapestry of that small town.
The Aberhart home (shown above)was a white, two-story farmhouse, covered with clapboard siding, standing on an open rise of land, with a picturesque view from all directions.

The house had a spiral staircase to the second floor, and the parlour boasted a piano and fine furniture. Out behind the house were farm buildings later shaded by the large deciduous trees that the boys planted. A stream flowing through the back of the property provided a ready supply of fish and a source of water for the livestock. A new piggery that William Sr. had constructed along the latest scientific principles, and which was described as a ''palatial mansion,'' was the talk of the community and earned him a reputation as a progressive farmer." (2)

A normal day for William would be up at 4 or 5 to milk the cows and then deliver the milk before going to school, then another delivery in the evening.
His father was stern, though it is said that his mother was the disciplinarian. She was not affectionate with the children, but pushed them to succeed, and stressed the importance of education. 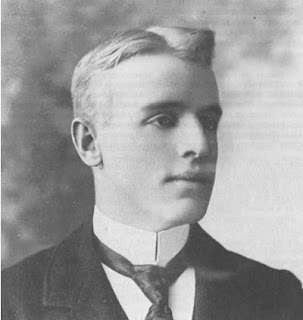 William was only an average student though he excelled at mathematics and penmanship, and had an almost photographic memory, but few reasoning skills. He also enjoyed music and taught himself to play several musical instruments.
Children he went to school with claimed that he did not really get along well with other students, so had no real friends.
He later attended Seaforth high school, where he earned a reputation as a top athlete, and was nicknamed "Whitey" because of his light hair colour. From there he enrolled in a model* school and obtained a third class certificate allowing him to teach elementary classes.
He thought he had found his calling.
Chapter Six Continued: Classrooms and Battlegrounds

Footnotes:
*Model Schools were established to train young people how to teach. The quality of instruction was poor, but there was a great demand at the time for teachers, especially in rural areas, so it was really the best they could do. I think the focus was on discipline and maintaining control of a classroom.
Sources:
1. Registrations of Births and Stillbirths – 1869-1909. MS 929-40, Toronto, Ontario, Canada: Archives of Ontario.
2. Bible Bill: A Biography of William Aberhart, By: David R. Elliot and Iris Miller, Edmonton: Reidmore Books, 1987, Pg. 3
3. Egmondville and Van Egmond House, Heritage of Huron East, Virtual
Posted by Emily Dee at 11:11 AM