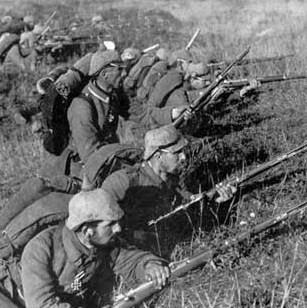 When war was declared in Germany, the Jewish population was just as eager to join in the fight, and despite their treatment, good or bad, they engaged in public displays of patriotism.

When the Kaiser called for a national day of prayer, they flocked to the synagogues to pray for the success of the fatherland.

100,000 German Jews fought for their country, because they were German first. In the same way that First Nations and Metis joined the fight on the Canadian side.

It was their country too.

Of course that doesn't mean that everyone was eager, including a young man who had just finished his studies at Marburg and was drafted into service. (1)

When Leo Strauss got the call he faked appendicitis, but when the doctor examined him, and found him to be healthy, he became a soldier on July 5, 1917, and was sent to Belgium as an interpreter, where he would remain until December of the following year.

He seems to have been rather ambivalent about this war. Adolf Hitler who though impacted by the loss of so many of his comrades, never lost his fervour, and was disappointed that Germany had surrendered. Friedrich Von Hayek chose his career because of it: "The decisive influence was really World War I. It's bound to draw your attention to the problems of political organization." (2)

I think that for Strauss, it was because he was an intellectual, and would have been opposed to intellectuals going to war. Or maybe he saw it as an intrusion. But he didn't on the surface oppose war.

In fact during the Cuban Missile Crisis, he supported an invasion even if it meant a nuclear attack:

I believe that the following points have not been made, or at least have not been made with sufficient audibility:… To speak in the only language which Khrushchev understands, Cuba is our Hungary; just as we did not make the slightest move when he solved the problem in his back yard, Hungary, he cannot, and will not make the slightest move if and when we take care of the problem in our back yard, Cuba. (3)

However, while he is being blamed by many for the War in Iraq, mainly because people like Paul Wolfovitz and William Kristol are Straussians, I don't think he would have felt that the weapons of mass destruction hoax would have been a noble lie.

Leo Strauss can't really be blamed for people twisting his philosophy, though they certainly have.