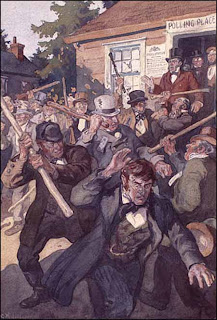 Vote for no man whose conduct in private and public life is not above suspicion, and inquire with due diligence before you give your suffrages.* William Lyon Mackenzie

Before any European settlers arrived in Upper Canada, there was a well established governing body. In fact the Six Nations Confederacy, has been referred to as the oldest living participatory democracy on earth. Another claim to fame for this country.

Democratic government for the new settlers was a bit slower going, and did not come about without a fight. In 1841 Upper and Lower Canada united, in response to the 1837 Rebellion, with Ontario becoming Canada West and Quebec Canada East.

The Reform Party was established decades before and another protest party, the Clear Grits, under George Brown, also emerged to challenge the status quo. (Eventually becoming the Liberal Party** of Canada)

Over the next several years coalitions were formed and broken, until 1867 when Confederation** brought about the new Dominion of Canada, with Sir John A. MacDonald as it's first Prime Minister.

However, even with suffrage, democracy was not quite as democratic as it sounds, because voting for most people was difficult. Distance to polling stations and poor travel conditions kept many settlements out of the process.

Voting was also oral, resulting in intimidation, blackmail, and even violence. The law stipulated that if no one showed up at a polling station for an hour, they could simply close their doors, so candidates would use hired thugs to prevent would be voters from making it inside, and unlimited free alcohol, usually led to further violence.

One polling station reported the following in the early days:

Passions ran so high that a terrible fight broke out. Punches and every other offensive and defensive tactic were employed. In the blink of an eye table legs were turned into swords and the rest into shields. The combatants unceremoniously went for each other's nose, hair and other handy parts, pulling at them mercilessly ... The faces of many and the bodies of nearly all attested to the doggedness of the fighting.

In fact it was stated that the reason why women weren't given the right to vote, was because these events were far too dangerous. Before 1867, 20 deaths and countless injuries occurred at polling stations as a result of riots, so I guess I can understand the reasoning.

But women were not the only ones left out of the process, since the criteria for the right to vote in Upper Canada was pretty restrictive, and applied only to British subjects with often exclusive definitions of what that meant. You also had to be a land owner and have been paying taxes for at least a year, and many government employees were also barred.

The Heffler-Aberhart family did not appear to be involved in politics, at least not in running for office, though Christopher Heffler did make the voter list beginning in 1877. Whether he exercised his right to vote is not recorded.

However, several years later, his wife's biological grandson would certainly earn his place in Canada's political history, as he too started a protest movement that would culminate in a new Reform Party, eventually forming the federal government in 2006, under Stephen Harper.

Since the party of Sir John A. was disbanded in 2003, ending a 150 year tradition, this new party claimed the title: The Conservative Party of Canada with a neo-Conservative mandate.

*Address to the reformers of Upper Canada Toronto, September 1834

** In 1867, Nova Scotia was greatly apposed to joining Confederation, until a popular scholar and theologian, George Monro Grant stepped in. It is said that without his involvement, there may not have been a Dominion of Canada, at least not at that time. And as a matter of coincidence, his great, great grandson, Michael Ignatieff, is now leader of the Liberal Party of Canada (in opposition to Stephen Harper), though Grant at the time was non-partisan.