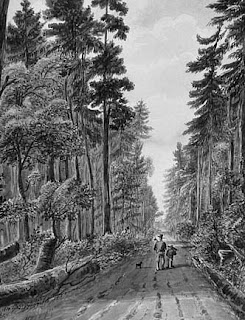 When William Eberhardt arrived in Upper Canada in 1851, he was just seven years old. After being shipwrecked, robbed and bounced along roads that surely must be leading to Hades, the family arrived at their final destination, which actually, would not have done much to convince the young lad that they hadn't indeed landed in Hades.
A settlement in the backwoods of Upper Canada in 1851, was a pretty intimidating place. But to the Heffler-Eberhardt family this would be home.
And that family then included his step-father Christopher Heffler (the original German spelling was Hoeffler) (1), his mother Sophia, brother Charles, who was close to William's age, and a half-brother Henry, who was just a baby; the first child of Sophia and her new husband. At least four more siblings would be born at Tuckersmith, all Hefflers: Loucina, Fresia, John (who appears to have died between 1861 and 1871) and Louis. (2)

Growing Up in Tuckersmith
In many ways the Heffler-Eberhardt family prospered in sync with the hamlet of Egmondville. They never enjoyed the riches of the Egmond family, but their evolution from penniless immigrants to contributing citizens was just as profound.
Most of their time would be spent at the homestead, clearing land, building, making furniture and furnishings, and struggling to survive. But trade and the acquiring of provisions would be done in Egmondville, which had become a thriving little community.
In 1852, Valentine Boehler had established a pottery on land purchased from the Van Egmond family for £20. In 1854, the youngest of Susanne's children, August; started the Van Egmond Woolen Mills and in 1866, two of August's sons, Leopold and William, upgraded the woolen Mill and constructed a three storey brick building.
There were two blacksmith shops, one across from Constant Van Egmond’s house. There was also a wagon and carriage shop, a brewery, a post office and a general store. All of this would have been the backdrop to William's formative years. (3)
There was a schoolhouse at the time as well, but I don't believe he ever attended, since he grew up never learning to read or write. Or at least not being able to read or write English. The family probably spoke only German, at least in the early years, which would have been an impediment in an English speaking school, where the teacher probably knew only that language. And of course, William's help would have been required at home, so schooling was a luxury they couldn't afford.
There was also a large Aboriginal population, members of the Six Nations, who played a significant role in the community. New settlers learned a lot about crop rotation, proper clothing and surviving the elements from people who had been doing it for centuries.
If there was time for play, games were probably based on those played in Prussia, which were not unlike those most children played everywhere. Verstecken (hide and seek) or Fangen (chase or catch). Aboriginal children also shared one of their favourites with young pioneers; follow the leader. This was part of their growing up, since it would always include the necessary skills for travel through the forests. Music and stories were also probably those learned by Sophia and Christopher when they were children.
William's parents may have been stern, since it was a trait passed on to future generations. But they were probably also very hard working, another trait passed on through the years.
Chapter Four Continued: Saving his Soul
Sources:
1. Christopher Heffler - Code: 1823.15 Primary Immigrant: Heffler, Christopher, National Archives of Canada in Ottawa, Index to the 1871 Census of Ontario: Huron. Toronto: Ontario Genealogical Society, By: Bruce S. Elliot, 1986, Page: 110
2. 1871 Census: Huron South, Tuckersmith, Division: 3 Microfilm Roll: C-9929 Page: 43
3. Egmondville and Van Egmond House, Heritage of Huron East, Virtual Tour
Posted by Emily Dee at 4:37 AM