When William Aberhart was still attending school, prior to getting his teacher's certificate, he fell out of a tree while picking apples, broke his leg, and was laid up at home until it mended.

During this time he may have studied the Bible intently, because it seems to be about then that his interest in religion took hold. He had attended Sunday School classes at the Presbyterian Church in Egmondville, but since he was adept at memory work, lacking reasoning skills, his knowledge was no doubt literal.

When he was finally able to return to his classes, he became alarmed at the religious program, which was following the social gospel, questioning the infallibility of the Bible.

While in my ... courses I had listened to the vaporing of modern theology. I heard them say that the first twelve chapters of Genesis was an allegory; that the story of the Flood was an Eastern Exaggeration, for the water had not covered the whole earth; that the crossing of the Red Sea was Eastern Imagery, and that it was the natural result of an East wind; that the yarn of Joshua and the Sun standing still was merely National legend, and not by any means scientifically accurate; that the story of Jonah and the whale was picturesque and figurative, and not meant to be taken in any literal fashion; that the first chapter of Matthew,
which describes the virgin birth, was unscientific and fanciful. I heard them say these things, and for a time I hardly knew where I was at. (1)

His faith wasn't put in question, so much as his memory of the Bible, which was how he defined his faith. This would have presented quite a dilemma for the young man, and began his disdain for liberal Christianity.

Brantford and a Spiritual Awakening

William arrived in Brantford at a time when the Niagara Bible Conferences had greatly impacted Church teachings. He joined the Zion Presbyterian Church, not long after they had lost their popular preacher, William Cochrane, who had stood at their pulpit since 1862. Cochrane had denied the new social gospel, maintaining that “Any toning down of such doctrines, is dishonorable in a Christian teacher, and deserving of severest condemnation.” (2)

The tradition continued and in 1902, the Church hosted their own Bible Conference, where the guest speakers were Elmer Harris and A.C. Dixon. Harris was the founder of the Toronto Bible College and would later be one of the consulting editors of the Scofield Reference Bible (1909). He was also the son John Harris, of the Massey-Harris company.

A.C. Dixon was a preacher at the Moody Church and regular attendant of the Niagara conferences. He was also the co-author a series of pamphlets defending conservative Christianity from the advances of modern theology, something that would have held a great sway with young William. The following year the speaker was Cyrus Scofield himself.

By this time, Aberhart was deeply involved with the dispensationalism that began with Reverend Edward Irving, who was considered a lunatic by his peers, and John Nelson Darby, whose writings on the seven dispensations, helped to form the basis of the Scofield Reference Bible. He also wrote a letter to his parents, berating them for not keeping the faith, that alienated him from his family. 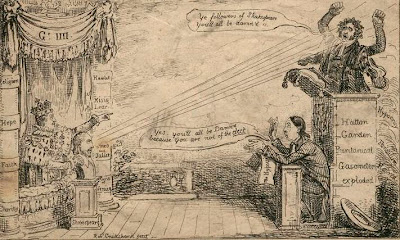 There was another man who would have an effect on the direction of William Aberhart's future: Dr. William Nichol, who for eight years was the Sunday School Superintendent at the Zion Presbyterian Church.

Dr. Nichol had graduated from the school of homeopathy in Chicago in 1869, at a time when the famous evangelist, D.L. Moody was head of the YMCA, and was running an enormously successful Sunday School in the city. Nichol may have decided to follow in Moody's footsteps, because not only did he himself teach Sunday School and Bible classes, but he also became actively involved in the local YMCA, serving two terms as president. (3)

Nichol embraced dispensationalism and would eventually base his classes on the teachings of Cyrus Scofield. Young William was inspired and began teaching Bible classes himself, with his popular theme being the "Second coming of Christ." He continued to attend lectures by all of the top fundamentalists, and became especially enamoured with Dwight Lyman Moody. After seeing an ad for Scofield Bible studies, he sent away his $ 5.00 and completed the course at home. (4)

Besides teaching at the Zion Church he also ran classes at the YMCA and the Brantford Collegiate Institute. He then decided that he would like to become a preacher himself and enrolled in extramural studies at Queen's University, then a Presbyterian College:

His university education was rather unusual; he took his entire degree by correspondence, had no time for extensive research, and was never able to interact with his teachers and other students and thereby refine his thinking. That he was able to complete his degree at all shows a tremendous amount of ambition and initiative, for he had to carry his studies along with his duties as principal, husband, father, and lay preacher. Other than first-class honours in mathematics, his marks were very poor, reflecting the little time he was able to devote to his studies. He failed Greek twice, Hebrew once, and received only 35 per cent in Honours Political Science. He finally completed his B.A. degree in 1911. (5)

His theories were also becoming more erratic and not everyone saw a future preacher:

"He got in wrong with the ministers and officials of the Church because of his high-handed methods and his tendency to condemn all who were not of his opinion. Just prior to his departure for the West, there was increasing evidence of this intolerance." (4)

This would be the pattern of William Aberhart's life and the movement he created: Confrontation, Intolerance and erratic beliefs.