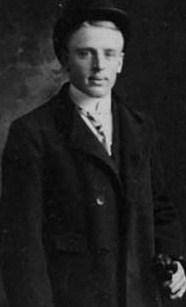 After finishing his model school training, William Aberhart returned to academia to upgrade, eventually acquiring a professional certification, and in 1901 accepted a teaching position in Brantford, Ontario, at Central Public School.

Central was the pride of the city, first built in 1850, and officially opened by Egerton Ryerson. Over the next two decades, the school was enlarged, until a fired destroyed much of it 1890.

A new school was erected on the site*, with a central tower and modern facilities. Since William had taken a business course, it was here that he would begin his teaching career.

Or his religious career? His military career? Maybe all three.

If Aberhart's teaching methods could be defined with one word it would be 'discipline'. Every report stressed that he was a strong disciplinarian who kept a tight control over his students. However, he didn't learn those skills in school, but rather from studying Oliver Cromwell. (1)

Cromwell is a well known historical figure, probably best noted for making England a republican Commonwealth; but he has also become an inspiration to many evangelicals, because of his New Model Army that combined military skills with religious fervour*.

Rather than choosing his military leaders from among the gentry, Cromwell instead chose them on their merits. Their religious merits. Strong believers like himself "... who knew that God was on their side;" the men would often sing psalms just before going into battle. Discipline was also strict and the training thorough, making them professional soldiers for Christ.

Aberhart's classroom operated much like an army camp. He assigned each of his students a three-digit number by which he addressed them rather than by name, and stamped their assignments with a rubber stamp that read "Checked by Wm. Aberhart." ... With recalcitrant students he had no patience; for slight misdemeanors he is said to have doled out strappings on Monday, Wednesday, and Friday, and for more serious offences he recom­mended suspension or expulsion. One former student claimed that Aberhart did everything he could to break the spirit of a child. (1)

In an essay he wrote himself he claimed that he viewed his classroom as a battlefield, and in choosing between individual creativity or group order, he chose order. The essay was riddled with military terminology. Students were not individuals but numbers, members of a group that needed to be controlled.

In 1905, the principal of Central School passed away, and William was named the interim principal, where he could put his 'military' training to better use. The following year he was given the job.

However, his religious calling took priority in his life, and would shape his future in ways that he could never have imagined.

*The school burned down again in 1982, but when they were removing the rubble, they discovered that it had been built on a burial ground. Looking back at records, clearly showed that this was known, since it appeared on an 1830 survey, but apparently ignored.

** A US firm was inscribing Biblical passages into gun sights which were also being used by the Canadian military. When discovered, it created a storm of protest, and they had to be removed.Sources: