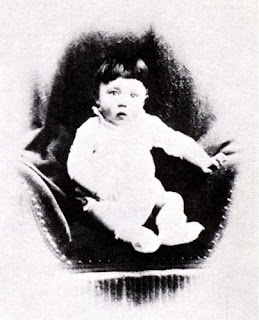 Adolfus Hitler was born on April 20, 1889, at half-past six in the evening, at the Hotel zum Pommer* in Braunau am Inn, the second child of Klara Polzl and the fifth for Alois Hitler. He was baptized two days later, at three in the afternoon. His godparents were a couple by the name of Prinz from the Lowengasse in Vienna.

It's important to trace Adolf's life from his humble beginnings, because he was not born into greatness. He was an ordinary man with perhaps a little less than ordinary roots. The man he would become, is the embodiment of a horrible time in history, that I believe would have taken place with or without him.

The people behind his rise to fame were just that powerful.

By identifying the Holocaust with his name alone, we risk the same thing happening again, because we may mistakenly believe that once he was gone, the hatred was buried with him.

Adolf Hitler was a narcissist, possibly the result of his insecurities, and the people who propelled him to power, fueled his over inflated ego and exploited his mental instability.

The end result was the creation of a monster.

In 1894, Alois retired on a pension and the family moved to Linz, the capital of Upper Austria. He bought and sold farm land before finally settling in the suburb of Leonding.

On April 2, 1895, the six-year-old Aldofus Hitler entered the public school in the village of Fischlham; and two years later he was sent to the cloister school at Lambach, and finally a public school in Leonding. His report cards from these years show that he earned excellent marks, with exceptionals in singing, drawing, and gymnastics.

But despite good grades, he was described by teachers, fellow pupils, and neighbors as a rough-neck, a loud-mouthed ring leader in children's games, who often brought knives and axes to school.

His father had become increasingly violent, and he beat Adolf on a regular basis. His mother would console him, and he admitted later that he could manipulate her. Not that the thrashings weren't real. When he was 10, his father beat him so bad that he was in a coma for three days, not expected to live.

According to Adolf, to punish his father he became frivolous and lazy. His grades certainly reflected this new attitude, because in 1900, he failed his first year of secondary school.

He was also becoming political, getting caught up in the popular movements of the day. An embittered rebellion against the authority of Church and State was simmering among the intellectuals of Austria, particularly in the country sections outside Vienna. With battle cries of Home to the Reich and Away from Rome; change was in the air.

Georg Ritter von Schonerer, his father's hero was once more in the limelight, championing these causes and in 1901, 21 members of his party gained seats in the Parliament.

Like his father, Adolf became an admirer of Schonerer, and it is said that when he was 14, he actually spit out the communion host at church, in support of his movement for the conversion of all Roman Catholic German speakers of Austria to Lutheran Protestantism.

His father remained a vocal supporter of pan-Germanism, and often engaged in political debates. But his health was failing and he had developed a chronic cough, often spitting up blood. On the morning of January 3, 1903, shortly before ten o'clock, Alois Hitler collapsed in the street. A friend found him and brought him to a near-by inn, but he never recovered. The death records indicate: 'Died suddenly of pulmonary hemorrhage'.

Adolf would often blame himself, because they had constantly battled over his refusal to become a civil servant. He wanted to be an architect or an artist.

The Rest of the Family

Paula, born in 1896, learned applied art, and later led a modest life in Vienna. She never married and when Adolf rose to power, he asked her to change her name after she lost a job with a Vienna insurance company, because of it. From then on she became Paula Wolf.

Perhaps she understood better than most people who her brother really was. She once said "Although he had captured the public, who believed him their protector and friend, I knew what he wanted and I was worried not only for his physical safety but also about his sanity."

Adolf also had two half-siblings from his father's relationship with Franziska Matzelsberger. Angela, born in 1883, later married an official by the name of Raubal. After his death she was found living in Vienna as a cook and housekeeper, and for a time worked in a Jewish charity kitchen.

His half-brother, Alois Matzelsberger, born in 1882, was later later legitimized as Alois Hitler. He was in and out of trouble, and arrested several times for theft and later imprisoned for bigamy. He spent some time in England, married and had a family, but would later desert them.

In the 1930s, he opened an inn that was frequented by the National Socialists, in one of the busiest squares in Berlin, and it became quite fashionable. Following the war Alois was briefly involved with a right-wing political party, and in the 1950s he made money signing photographs of his brother and selling them to tourists. He died on May 20, 1956 in Hamburg.

*In 1989 the new mayor Gerhard Skiba took the initiative and placed a memorial stone commemorating the victims of World War II in front of the building in which Hitler was born. The stone is made of granite from the Mauthausen concentration camp. It states: Für Frieden, Freiheit und Demokratie. Nie wieder Faschismus. Millionen Tote mahnen, or "For peace, freedom and democracy, never again Fascism, millions of dead warn (us)." It is often vandalized by members of neo-Nazi groups.