After his father's death, Adolf decided to pursue his art career. The family had enough money to live comfortably, and in 1905, he was able to enrol in a private art school in Bliitenstrasse, directed by a Professor Grober, where he studied drawing. Fellow pupils described him as quiet and reserved, though there would be occasional outbursts. They also said that he was prone to speak with his hands, and noted the short, angular, brusque motions of his head, traits that would help to define him in later years.

Every October, the Vienna school of arts accepted applications for enrollment, so in 1907, Adolf presented some of his drawings, but was turned down. His mother died on December 21 of that year of breast cancer, so he decided to move to Vienna where he was convinced he could make it as artist.

In October of 1908, he presented his portfolio, but was again tuned down. This is when his life as a Bohemian on the streets of Vienna began. 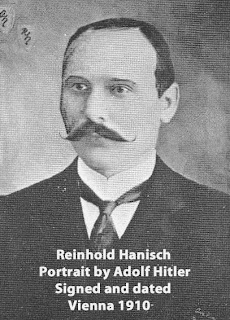 When living in Vienna, Adolf Hitler met a man by the name of Reinhold Hanisch, who would become his almost constant companion. A street hustler, Hanisch encouraged the younger Hitler to start creating postcards and small bits of art that could be sold to support the two.

Between that and a small pension, Adolf was able to get them off the street, and into a run-down 'home for men'.

They would spend three years in that establishment, where Adolf read every newspaper available, lived mostly on cream puffs and loved to debate politics with his house mates, though he was the only one who always spoke in favour of 'the state'.

But what is more interesting about that time, is the fact that most of Adolf's friends were Jewish.
A copper cleaner, a one-eyed locksmith, an old-clothes dealer. All Jewish. In fact it was the clothes dealer who provided Adolf with his wardrobe, including his then signature "caftan-style" black coat.

In his book Mein Kampf, written after the war, Adolf Hitler claims to have come by his anti-Semitism early, actually dating it to his time in Vienna. But as history has proven, that time was spent with Jewish friends.

His constant companion, Reinhold Hanisch; describes Adolf's appearance during that time. A long black coat given to him by a used-clothes dealer (Jewish) a greasy bowler, black beard and moustache; and when he was with his group, Hanisch claims that he looked no different than the rest. And it had nothing to do with being Jewish or Gentile; but everything to do with being poor.
He was one of the "unwashed" failures he would later speak of with such contempt.

But he never saw it that way. Though living hand to mouth, he always believed that he was above the others. His Bohemian lifestyle was by choice. He was an artist and a philosopher, or as Konrad Heiden referred to him; an "artist-prince".

And living that lifestyle made him an individual. He made his own choices and answered to no one. He could beg without shame, because he believed that he was destined for greatness.

And he could never become a member of the working class, because what he saw in them was something he despised. The 'morality of pity,' and if he joined them, it meant that he had truly failed. They didn't strive for individuality, but equal rights and freedom from oppression.

In the age which had invented the 'religion of labor,' the young artist-prince wouldn't let himself be fooled. That was a sugary swindle for the masses who didn't want to and had no right to improve their lot; but a young artist waits in princely idleness for the dream-gift of inspiration.