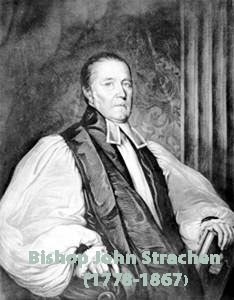 One of the reasons for the 1837 Rebellion was something called the Clergy Reserves, which were established in 1791 by Upper Canada's first lieutenant governor, John Graves Simcoe.
What the act allowed for was the designation of one-seventh of all Crown lands for "a Protestant clergy," though it was implied that would mean the Church of England (Anglican).
However, because it wasn't specific, the Presbyterians challenged the law and in 1824 the Church of Scotland (Presbyterian) was added, though all revenues were still controlled by Anglican Bishop Strachan, chair of the Clergy Corporation. Strachan was aligned with the Tory elite as part of what was dubbed the Family Compact. (1)

The settlers had brought with them their own customs and traditions, including diverse religious practices, and soon they were all vying for a piece of the pie.
After the Rebellion, as an appeasement, the profits of the clergy reserves were distributed amongst all leading Protestant groups and in 1854, the lands were finally removed from church ownership and revenues transferred to the government.
All denominations now had the right to self government, though most did not have the resources to build churches, so various ministers would travel about, holding services in school houses, barns or private homes.
There was no census recorded for Tuckersmith in 1851, but in 1861 the Heffler family was listed as belonging to the Evangelical Lutheran denomination. (2) It would be several years before a Lutheran church was build in Egmondville, so they would have been ministered by one of the travelling preachers. Lutherans believe in the infallibility of the Bible, salvation and forgiveness.
These travelling preachers at the time, especially the Lutherans, also brought another element to the lives of some of the German settlers who didn't reside in German communities, including news relating specifically to them. And the fact that they could preach in German brought reminders of home and a sense of belonging.
By the time of that 1861 census, William, then 17, was already working as a blacksmith's assistant, possibly for Francis Angus, a Scotsman and Presbyterian. He may have boarded with him at the time, so it's not likely that he received much religion, at least not in the Lutheran tradition, as noted on the census. (3)
Continue to Political Climate
Sources: