The Antichrist 'does not look like what he is,' and therein precisely lies the danger. He is a young man with a strong personality and seductive power of speech and writing. He is an ascetic and a vegetarian. He will win fame first by a book in which 'respect of the ancient traditions and symbols' stands side by side.

The copy of the Protocols that Alfred Rosenberg brought back from Russia, included the version of the Antichrist, as laid down by Vladimir Soloviev, and interpreted by the alleged forger Sergei Nilus (The Great within the Small and Antichrist, an Imminent Political Possibility. Notes of an Orthodox Believer). And in it "Soloviev's Antichrist finally disappears in a battle against the desperate Jews, many of whom he had massacred before." (1)

After speaking with Adolf, Dietrich Eckart was convinced that he had found the right person to 'act' as leader. He was an unknown, passionate about politics and had a huge ego*.

And the artist-prince believed that others now recognized the greatness, that he long knew he had.

Passed over for promotion in the army, on the grounds that he "lacked leadership qualities," it was that very lack of leadership qualities that would have appealed to the founders of the German Worker's Party. He was someone they could mould, and so long as they kept his ego fed, could manipulate.

And he had a strangeness about him that would appeal to the mystics in the Thule Society.

And while much has been written about Hitler's involvement with that society, with historians putting that notion to rest, I don't believe he would have qualified to join.

Members were affluent, influential people from Munich society: professors, noblemen, manufacturers, senior officials, businesspeople .... Those wishing to join had to complete a questionnaire and submit a photograph, which was examined for purity of race. The following ‘blood declaration’ also had to be filed: ‘The undersigned assures to the best of his knowledge and conscience that no Jewish or coloured blood flows through his veins or those of this wife and that there are no family members of coloured race among his forefathers ... (2)

Adolf's father was the illegitimate child of a peasant girl. His grandfather was a gypsy. He had no pedigree.

The Thule society was occult in nature, and engaged in symbolic rituals. There were several levels of membership, and while the agenda may have been different for many, they all had a common goal. Purity of the Aryan stock and a belief in the racist philosophy of Guido von List, which asserted the superiority of the Aryans, at least in their interpretations.

And everything that came to define the future Nazi Party, was drawn from that society. Their flag, their anthem and even the creation of their party leader.

Dietrich Eckart immediately introduced his find to his friends Alfred Rosenberg and Anton Drexler. They obviously approved, and now worked to transform the eager Hitler into the Antichrist of Soloviev's vision.

He already had the mustache, an obvious spiritual sign. But they must now make him athletic, seductive, a powerful speaker and a vegetarian**. But above all he had to be able to pull off omnipotent, if they were able to sell him to the affluent moneyed people of the Thule Society.

And the popular playwright and director, Ekart, used his skills to transform*** the former soldier, who looked like this when he enlisted: 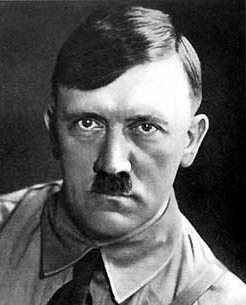 *Hitler would sue his friend Hanisch, from his Vienna days, who was handling the sale of his artwork. He felt that a painting of his that Hanisch sold for ten kronen, was worth at least a hundred, and believed that he'd been cheated. Art critics now agree that it was definitely a ten kronen 'work of art.'

**Hitler's vegetarianism was only part of his created persona. He actually loved sausages, cavier and wild game. (3)

***One aspect of neoconservatism that is often overlooked is the practice of image politics. Political Science professor and author, Trevor Harrison, discusses in his book about Stockwell Day: Requiem For a Lightweight: Stockwell Day and Image Politics; how Conrad Black selected Day to run as leader of the Alliance Party. Day, who only had a high school education, was full of self-importance, had the right look and was virtually unknown outside of Alberta. Soon he was being introduced to the cream of society and speaking at $1,000.00 a plate fundraisers. But Black may have been unaware of his questionable past, that surfaced during the election campaign.

And of course the challenge with Stephen Harper was to change his appearance from this: 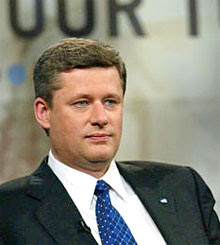 "Up until the writ for the 2006 election was dropped, Conservative Leader Stephen Harper was widely viewed outside his home province of Alberta as a sullen and condescending policy wonk. Many believe it was this image of a strident right-wing ideologue that helped seal his party's defeat in 2004. But in 2006, the voters saw a new and improved Harper, one who is more centrist, more polished, a party leader who has been made over both professionally and politically. Gone is the helmet hair-do. Gone is the petulant Harper with the legendary simmering temper..." (4)

All politicians, present and future, work to create a saleable image. But for Neocons, it's a religion. All part of the "noble lie".