Chapter Fifteen Continued: From Out of the Rubble Steps a Saviour 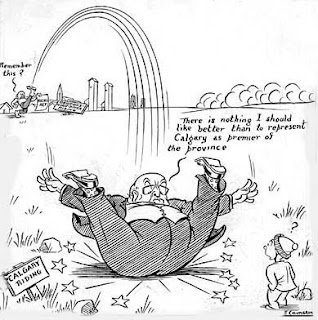 While still engaged in radical fundamentalism, William Aberhart threw himself into Social Credit with a vengeance. If he could cure Alberta's financial woes, how could anyone doubt his spiritual powers?

Besides he genuinely cared, as he saw the effects of the depression on his students and their families.

So with Ernest Manning at his side, he travelled the countryside, speaking wherever they would listen. Soon social credit clubs sprang up everywhere, gaining support not just from those hardest hit, but from all levels of society.

This led to the formation of the Douglas Social Credit League.

And as this grassroots movement continued to grow, the UFA of Alberta, began to worry that William Aberhart might just ride the excitement into political power, if he decided to go that route. This was especially troubling since many members of the UFA had joined the League. (1)

So the government announced that they would hold a public inquiry and invited both Aberhart and Major Clifford Douglas to speak on the subject, hoping to put the matter to rest.

Wilson and Harry Southam of the Southam newspaper chain, had also become interested and helped to finance Douglas's visit. They had met him when he toured Canada in 1923, and would often visit the Major in London.

One of the biggest concerns was Aberhart's understanding of social credit principles. He had very little. He had published a yellow pamphlet, which to those who understood the economics; it was clear that he had either misinterpreted the system or simply ignored the elements he couldn't grasp, and filled them in with nonsense.

And there was a growing discomfort with the religious elements that he introduced to the system. Both Douglas and Maurice Colbourne, included Christianity in their books, but only in the context that Christian principles would not be in conflict and a monetary system that improved people's lives, was a noble and 'Christian' thing to do.

But for Aberhart and Manning, it was more like adding a few social credit principles into their fundamentalist, ultradispensationalist dogma, that would eventually become their party platform.

And when League member Larkham Collins wrote to Major Douglas expressing his concerns with the yellow pamphlet, Douglas dismissed them:

Mr. Aberhart's pamphlet is issued entirely upon his own authority, and I have regarded it merely as preliminary progaganda**, for which purpose it appears to have been effective... In view of your remarks, I have passed it on to the Publications Committee of the Social Credit Secretariat for analysis, as you will realise that it is physically impossible for me to deal personally with all the pamphlets which are reaching me from all quarters of the world." (2)

So Douglas may have realized that Aberhart and Manning had it all wrong, but they had the passion and means (through their radio program) to sell it.

Larkham was also concerned that the Canadian Constitution would not support Alberta going it alone. Douglas already had experience with the Canadian government, having made a presentation to a Parliamentary committee in 1923, but his response to this was puzzling.

In regard to the question as to the possibility or otherwise of instituting a Social Credit regime in Alberta, I think the shortest practical answer that I can give you is the one which I give to such questions everywhere, and that is, that the inauguration of a Social Credit system anywhere is really neither a theoretical nor an economic problem, but in the last resort, is a military problem. The present financial monopoly has devoted at least 100 years, if not more, to obtaining control of the ultimate sanctions of civilization, such as police and military forces, and so long as this control is maintained, the question as to whether it is legal to take certain steps for the breaking of the monopoly of credit is quite academic, since if it did happen to be legal, the law would unquestionably be altered to make it illegal.... The real task of the Social Credit army is not, I need hardly say, to raise a new military army, but to detach the existing forces from the possibility of use in such a situation. It is not an insoluble problem, but it is a very difficult one, and I should not like to give an off hand decision as to what extent a unit of the size of Alberta could act alone. (2)

Was he suggesting a military coup? It would certainly seem so.*

However, on the invitation by Alberta Premier William Brownlee, and some financial assistance from the Southam brothers, Clifford Douglas made his voyage to Canada, where he would address the legislature:

... the government at its spring Session convened the Agricultural Committee of the Legislature and invited Major Douglas, Mr. Aberhart and others to give evidence in support of the Social Credit cause. Major Douglas and Mr. Aberhart accepted the invitation, as did three other men not so well known to the public. One was Mr. Larkham Collins, chartered accountant, and Professor Elliott from the University of Alberta. Major Douglas himself appeared for two full days, April 6th and April 10th. The main result of these meetings was a firm resolve on the part of Social Credit supporters to continue unabatedly their organization, insisting that if neither of the parties represented in the Legislature would espouse the Social Credit cause, some other means would have to be devised to gain their ends. (1)

Knowing that there would be constitutional problems, Social Credit was not 'espoused', which meant that they would have to devise other means 'to gain their end'.

Pressure was being brought upon Mr. Aberhart by many Social Crediters to form a Social Credit party but this he resisted until he was left with no alternative. A "straw" vote was organized early in 1935 and volunteers went from door to door with ballots upon which qualified voters could declare themselves for or against Social Credit. The result was overwhelmingly in favor. (1)

There was going to be a party.

* When Preston Manning and Stephen Harper were organizing the expansion of Reform into Ontario, they received several reports that some of the ridings had been infiltrated by radical who were spewing anti-semitism, among other things. But 'head office' informed them that it was their job to hand out pamphlets and sell memberships (preliminary propaganda), while Manning or Harper would handle the rest.

**The author of two of the most popular books ever written; Animal Farm and 1984; George Orwell; was an early fan of Social Credit. However, he would later dismiss it as fascism.

1. 30+5 I know, I was There, A first-hand account of the workings and history of the Social Credit Government in Alberta, Canada 1935-68, by Alfred J Hooke, Douglas Social Credit Secretariat