William Aberhart and his disciple, Ernest Manning; would continue to be obsessed with the Antichrist and the end times; which gained momentum in depression era Alberta.

In 1931, the budding 'playwright, Manning, helped to write a play, based on the 1915 novel by Sydney Watson: The Mark of the Beast*.

The play was an adaptation of Sydney Watson's Mark of the Beast. Entitled The Branding Irons of the Antichrist, it depicted the terrors and persecutions experienced by a brother and sister during the Tribulation; they had not listened to the Gospel message before the Rapture. Following their mother's disappearance in the Rapture, they decided to believe in Christ at any cost. After refusing to accept the brand of the Antichrist they were executed. The moral of the play was that the audience should accept Christ then and there, and avoid the terrors of the Tribulation by being taken up in the Rapture, which Aberhart called "the overhead route". (1)

The cast was drawn from members of the Calgary Prophetic Bible Institute's youth group, and was performed throughout Alberta, becoming the 'Nightmare on Elm Street' for the depression era crowd.

One young lady who was a member of the church discovered that the terror stayed with her for some time. Afterward, when visiting a Christian friend and finding no one home, although the doors were open, she feared that the Rapture had occurred and she had been left behind to face the Antichrist." (1)

Of course William Aberhart thought he might know who the Antichrist was, and no not Adolf Hitler, but another 'dictator'. There were clues: 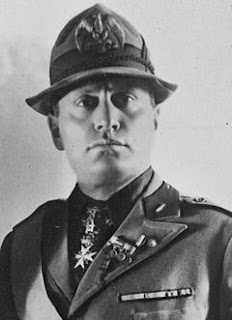 Premillennialism usually holds too that the Roman empire is to be revived, and that the Antichrist is to be the king or dictator of this realm ... He is not to be revealed as such until after the Rapture of the Church, although he may be the ruler in his kingdom before that time. He is to have more power than has ever before been exercised by any king or dictator. (2)

So given that the Antichrist was to revive the ancient Roman Empire and be a powerful dictator, who better to fit the bill than Benito Mussolini?

His [Aberhart's] theology had become very Manichean; everywhere he saw a cosmic battle between two opposing forces, God and Satan.

The Depression reinforced this belief in Aberhart's mind. When climatic disturbances and plagues of pestilence attacked Alberta's crops, Aberhart claimed that they were not punishments from God, but rather attacks from the Devil . Aberhart became fascinated with Mussolini and he preached a number of sermons on Mussolini** and prophecy. (2)

*Tim LaHaye and Jerry B. Jenkins, authors of the popular Left behind Series, that is now the blueprint for the Religious Right and Christians United For Israel; also claim to have been influenced by Sydney Watson's apocalyptic novels.

**Leo Strauss, for different reasons; also became fascinated with Mussolini. When he was with the Zionist Youth Blau-Weiss, it's leader Walter Moses, emulated the Italian dictator. Later Strauss would support not only fascism, but the corporatism of Benito.