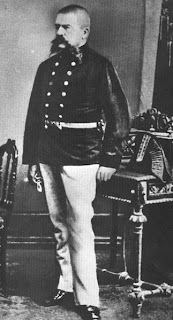 Alois Schicklgruber was born on June 7, 1837, in Strones, now part of North West Austria, to Maria Ann, a peasant woman of 42. His father was unknown, though he would later adopt the surname of his step-father, Georg Hiedler, then being written as Hittler and Hiitler.

I don't know if anyone has ever considered the possibility that Maria was impregnated by her father. Her mother had died when she was 26, and relationships like this would not be uncommon, especially in remote rural areas where human contact was limited.

It must have been an issue then, because the Austrian Sigmund Freud, spoke often of it and even published an essay: Totem and Tabu, dealing with incest.

Is this why she refused to name the father? I think it's a definite possibility, and certainly more likely to have been him than either of the Hiedler brothers.

Was it Maria's father who was the brute, a trait passed on to Alois? Is this why he was sent to the safety of an uncle, when Maria was dying? Her father outlived her by a few months.

I suppose it will always remain a mystery, but the fact is that Maria did marry Johann Georg Hiedler when Alois was five, and some time after, when she was ill, Alois was sent to live with his uncle, Johann Nepomuk Hiedler, in the village of Spittal. The name of this uncle is written as Johann von Nepomuk Hiitler, and since Johann von Nepomuk is the national saint of the Czech people; he may have been of that origin. (1)

Spittal was a market town, that had been the scene of several peasant uprisings. There is also some speculation that the postage stamp was invented there, though it is only one of several possibilities.

On a letter sent from Spittal to Klagenfurt, mailed on February 20, 1839, was affixed a stamp created by Ferdinand Egarter, who was postmaster at the time. The letter was addressed to Miss Konstanzia Egarter in Klagenfurt, and sent by her mother. Not a national stamp but still of great interest to collectors. (2)

Alois' uncle had a farm on the outskirts of the town, and was fairly prosperous. After his mother's death, his stepfather Georg would join them.

When reaching adolescence, Alois was hired on as a cobbler's apprentice, by a family member named Leder- miiller. However, the pay must have been low because there is a family story, that reveals a bit of the young man's temper. One day in a rage he threw his change purse out the window, bellowing that it contained only one kreuzer, and if he didn't have any more money than that, he didn't need the kreuzer either. (3)

The young Alois Schicklgruber does not seem to have been happy in his home. Apparently he was not treated as a legitimate child and was without expectation of inheritance. His son later related that his father left his native village fully determined not to return 'until he had made something of himself.' This 'some- thing, in accordance with small peasants' conceptions, was a profession of command: the police career.

At eighteen he became a border policeman in the Austrian customs service near Salzburg. He guarded the national border and hunted smugglers in a word, he became a man-hunter. An honorable profession, but scarcely friendly to man. In many countries it is the children of poor, out-of-the-way country sections who, from inborn hardness and contempt of humanity, choose the police profession. This illegitimate son of a small peasant took up his rifle and stalked the borders for human prey. The people in his native village must have looked on him with timid amazement when they first saw him in his shiny gold buttons, stamped with the imperial two-headed eagle, his pistol at his belt. The records [1855] show a young border patrolman: 'Alois Schicklgruber. (3)

At the age of twenty-seven, Alois would marry Anna Glasl-Horer, the adoptive daughter of a customs collector. She was fourteen years his senior, but was fairly well off. However, he abandoned her three years before her death from tuberculosis, and had already taken up with a young waitress, by the name of Franziska Matzelsberger, with whom he had at least two children: Alois* and Angela.

Franziska died young, and Alois would then be married for the third and final time, to Klara Pölzl, Adolf's mother.

Throughout all of his marriages it does not appear that Alois was a faithful husband. It is said that he had a great fondness for singing clubs, beer-houses and waitresses, one of whom bore him a son when he was still married to his first wife. After her death he was wed to the waitress, who also gave birth to a daughter, Angela, before she too passed on.

In addition to his love for spirits, women and song, he was also passionate about politics, and in particular the notion of pan-Germanism. The same pan-Germanism that had resulted in the 1848 March Revolution, that killed William Eberhart's father and caused his mother Sophia, and stepfather Christopher Heffler, to leave their home in Mecklenburg, Prussia, and put down roots in Upper Canada.

And perhaps one of the songs Alois sang on his nights in the taverns, was one sang by Eberhart's parents, to a Joseph Haydn tune:

By the 1860s the Kingdom of Prussia and the Austrian Empire were the two most powerful nations dominated by German-speaking elites.

Wilhelm I, also known as Wilhelm the Great, became the King of Prussia on January 2, 1861, and with the help of his Chancellor Otto von Bismarck, he established the German Empire in 1871. He then proclaimed himself to be the head of a union of German-speaking states.

Meanwhile the Kingdom of Austria had joined with the Kingdom of Hungary, in an attempt to compensate other ethniticities, which for many in Austria, only created a heightened feeling of German nationalism. Alois was one of these people, who would prefer to remain aligned with the German fatherland. As a result he became a staunch supporter of the Pan-German Reichsrat MP Georg von Schonerer.

So between hunting people down with his gun, womanizing and pounding his fists on the bars of the taverns at Braunau am Inn; Alois Schicklgruber led a very busy life.

*Alois jr. would eventually marry an Irish woman with whom he had many children, including a son, William Patrick Hitler. This son would later make a name for himself by alleging that Hitler's family had a Jewish origin.