The Canada Company got off to a bad start, as it would soon be accused of corruption, after aligning themselves with the questionable Tory government. John Graves Simcoe, Upper Canada's first lieutenant-governor, had already created a local aristocracy, by appointing friends to government posts and granting them the most desirable land. It would now be business as usual, with the "company" becoming the vehicle to grind the wheels and the machine to grease the palms.

This merging of the "elite" would be dubbed by the settlers 'The Family Compact'.

But it was not only land and money issues that angered the people, but a religious hierarchy, created by the 'Clergy Reserves'; an act providing that one-seventh of the public lands of Upper and Lower Canada, had to be set aside for the maintenance of a "Protestant clergy," though it only applied to the Church of England. Added to that was the fact that only Anglican ministers were allowed to perform marriages, something they exploited, often charging outlandish fees. 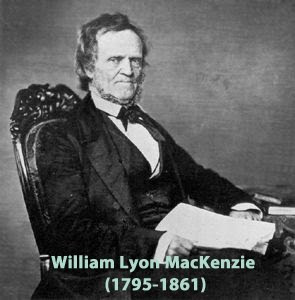 One person who did more than complain, was William Lyon MacKenzie, owner of the newspaper; the Colonial Advocate.

After many battles with the Tories he announced his intention to run for the Parliament of Upper Canada, and began printing constant attack ads against his opponents.

Under the banner of the Reform Party, he not only won handily, but the Reformers also took a majority of the seats. However, the system at the time did not allow them to create a cabinet, since those ministers had to be selected by the Lieutenant Governor, who was firmly allied with the Family Compact.

Political unrest would continue to grow, and in 1837, Mackenzie, now mayor of Toronto; decided it was time to take action. While most of the military was engaged in Lower Canada where a revolt had taken place, Mackenzie mustered an army of about 1000 men, who gathered at Montgomery's tavern in Toronto, in early December. Armed with rifles, staves and pitchforks, they marched down Yonge Street, only to be thwarted by a small group of Loyalists, who opened fire and then fled.

Concerned with the loss of two of their men, the remaining rebels gave up and took leave. Many were Americans, who headed back over the border, while others hid out wherever they could, including Anthony Van Egmond.

Van Egmond, frustrated that his complaints to the compact that shady land deals were forcing settlers off their land, had agreed to be the military commander, and was responsible for training and organizing the small army. Feeling something wasn't right he tried to get MacKenzie to change his mind, but there was no turning back.

After the initial scuffle, he fled and hid out in a farmhouse, where he was discovered, arrested and locked up in the Toronto jail. He died on January 5, 1838; before having to go through a trial. (1)

The government confiscated all of his property, with the exception of his home and the land it was on, which was held by Susanna and her five sons; Constant, Edouard, Leopold, William and August; in their own right. In 1845, the eldest son, Constant; founded the hamlet of Egmondville, in Tucker-Smith Township, and acted as Justice of the Peace.

The rebellion may have failed, but Egmondville would prosper under the capable hands of Susanne Van Egmont and her family.