Chapter Fourteen: Into the Darkness

One day in the summer of 1917 a student was reading in his room in Moscow. A stranger entered, laid a book on the table, and silently vanished. The cover of the book bore in Russian the words from the twenty-fourth chapter of Matthew: 'He is near, he is hard by the door.'

The student sensed the masterful irony of higher powers in this strange happening. They had sent him a silent message. He opened the book, and the voice of a demon spoke to him. It was a message concerning the Antichrist, who would come at the end of days. The Antichrist is no mythical being, no monkish medieval fantasy. It is the portrait of a type of man who comes to the fore when an epoch is dying. He is a man with a white skin, in everyday clothes, dangerously contemporary, and a mighty demagogue. He will talk with the masses, and at his word the masses will rise up and turn a culture to ashes, a culture which has deserved no better, since it has borne the Antichrist in its own image and for its own destruction. (1)

The student was Alfred Rosenberg and the book; The Protocols of the Wise Men of Zion, with a description of the Antichrist by Russian philosopher, Vladimir Sergeyevich Solovyov.

And though it would be determined time and again that the protocols were fraudulent, they would be used to justify pogroms, unleash hatred and even be the blueprint for the Holocaust.

The Thule Society and the Antichrist 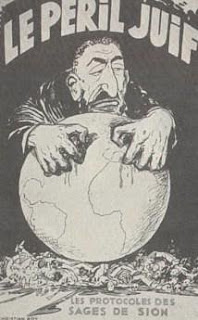 The Protocols of Zion were forged, taken from the fictional work of a French political satirist, Maurice Joly.

Written in 1864, about Napoleon III, and called a Dialogue in Hell Between Machiavelli and Montesquieu; Joly's work was republished in 1905, with a bit of alteration, by Pyotr Ivanovich Rachkovsky, head of the secret police in Russia; as the Protocols of the Wise Men of Zion. Rachkovsky's intention was to blame the unrest in Russia on a global Jewish conspiracy.

Widely distributed during the Russian Revolution, Rosenberg was not the only soldier to obtain a copy, and they would eventually make their way to other European countries, the United States and even Canada.

But when Rosenberg stuffed the little book into his suitcase in 1918, before heading to Munich; they would soon take on a life of their own.

The Thule Society was originally a Germanic study group, headed by Walter Nauhaus, a wounded World War I veteran, who had become a keeper of pedigrees for the "Order of Teutons". It became established in Munich in 1917 and the following year, Nauhaus was approached by Rudolf von Sebottendorf, head of the Germanenorden Walvater of the Holy Grail, to combine their efforts.

Both groups were occult in nature, with a keen interest in the origins of the Aryan race. On August 18, 1918, they officially merged and began a massive membership drive.

The society held a great appeal to the twenty-five-year-old Alfred Rosenberg*, and he would soon join their ranks, along with friends Dietrich Eckart, Gottfried Feder and Anton Drexler. How involved they were with the secret society is debatable, but they did help to create the German Worker's Party (DAP) as a loosely based offshoot.

DAP would take over the Thule's newspaper in 1920, where Rosenberg published the Protocols of Zion.

By then he was becoming increasingly concerned with the future of the 'Nordic population', denouncing both homosexuality and abortion as a direct threat to it's future. At the time any woman wanting an abortion could obtain a pill from a chemical plant (Probably Bayer) for 50 marks, so abortions were on the increase. (2)

And given the loss of millions of young men during the war, most future fathers, Rosenberg's duties were clear. He had to save his race.

The Thule Society was also known to have held seances and rituals, where they would try to call on the Antichrist. Some people have claimed that Hitler himself was involved in this, but records have proven otherwise, and he himself referred to the occult as foolishness.

But while Alberta's droughts and infestations resembled an apocalyptic environment, ripe for William Aberhart's prophesies; the break down of German society after the War, also created an end times atmosphere. And the Russian philosopher, Vladimir Sergeyevich Solovyov; had already provided a description of the Antichrist:

The Antichrist 'does not look like what he is,' and therein precisely lies the danger. He is a young man with a strong personality and seductive power of speech and writing. He is an ascetic and a vegetarian. He will win fame first by a book in which respect of the ancient traditions and symbols stands side by side with a bold and thorough radicalism in social and political problems ... absolute individualism with an ardent fidelity to the common weal . . . .. Then, in Berlin, he will become ruler of the `United States of Europe'; he will conquer Asia and North Africa; America will submit to him voluntarily. He is an absolute genius, and he may, says Soloviev, wear a small mustache. (3)

On August 14, 1919; Dietrich EcKart was giving a speech to the followers of his Geman Worker's Party, when a stranger entered the room. A new arrival, recruited from the streets of Munich.

Eckart stopped speaking as he gazed at the intruder. He was thin giving the appearance of being taller than he was, with a small toothbrush mustache.

And in that moment, Eckart knew that he had arrived.

Chapter Fourteen Continued: The Power of the Mustache