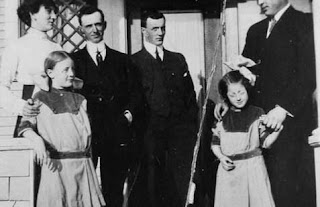 By 1910, William had all but given up his plans to be an ordained minister. He was not a Biblical scholar in the classic sense. He had no knowledge of Biblical languages and most of his interpretations were based on individual beliefs and misconceptions.

He was also becoming more combative and opinionated. So when a friend suggested that he join him in Alberta, it may have seemed like a chance to start over. There were also rumours that he had beaten a boy severely, so was being forced out (1), though it would appear that at least some people wanted him to stay.

When he arrived in Calgary in 1910, the city was still very much a frontier town, though the population had been growing steadily, with the offer of free "homestead" land. His relationship with his family was strained after he sent them his letter, attacking them for not going to church, so when he got the news of a tragedy, he did not return home.

William's father, who liked to drink now and then, found it tough during prohibition, but as a pharmacist, William's elder brother Charles was able to supply alcohol for "medicinal purposes", and would keep a bottle behind the counter for their dad.

On July 24, 1910, when William Sr. dropped by for a nip, he mistakenly pulled out a bottle of carbolic acid, and not being able to read or write, took a swallow and was dead within minutes. (2)

William had a job waiting for him, so settled right in, but Jessie found it a bit hard getting used to a rougher life. And it wouldn't be long before her husband was battling over religion again. Mostly the politics of the church it would seem, though many people were uncomfortable with his extremism.

At the Baptist church they said he never spoke of baptism but was far too fond of railing against the devil. He started Bible classes, which were popular, but he never liked taking questions. He had memorized the seven dispensations, and frowned on anything that took him off track.

Dispensationalism wasn't new to Calgary, but Aberhart's version may have been new to dispensationalists. However, he offered his followers an alternative to death, and they lapped it up. 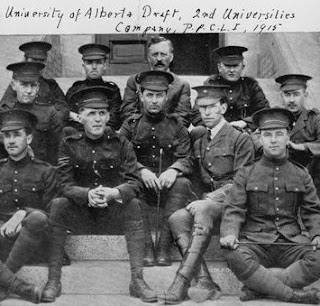 Then on August 4, 1914, an event would take place that no doubt altered Aberhart's course. Britain declared war on Germany and the next day, Canada announced that we would be joining them.

There was a great deal of excitement, and patriotism had never been so strong. The motherland was in trouble and her sons answered her cry for help.

But just as patriotism was high during this time, so too was anti-German sentiment.

Before WWI German Canadians did not question the compatibility of their customs and traditions with Canadian life. The First World War, however, changed all that. Overnight, Germans became Canada's most vilified enemy aliens. Charged with treason and sedition, although no charge was ever proven, many were economically ruined and socially ostracized. Unruly mobs were allowed to attack them and their properties in cities across the country. The Wartime Elections Act of September 1917 disenfranchised all German Canadians naturalized after March 1902. Clubs and associations were dissolved, German schools closed, and German-language papers suppressed.
Canadian towns with German names were renamed: Berlin, Ontario became Kitchener. More than 2,000 immigrants from Germany were interned. WWI trauma caused many German Canadians to camouflage their identity as Dutch, Scandinavian, and Russian. And long after the war, attribution of wartime characteristics continued. (3)

William Aberhart had been born in Canada but was of Geman stock with a very German sounding name. It's quite possible that at least some of his many battles with church elders, may have had something to do with his heritage.

But he loved the notion of military duty and honour, treating his students as the Cristian soldiers of Oliver Cromwell. But it didn't take much to be villified as the enemy.

Alf Hooke, one of the original Social Credit MLAs, after their 1935 sweep; also speaks of this:

Bitterness towards anything German, no matter how remotely connected, continued to grow, even though the war was over and Germany had been defeated. I recall one instance of a young Englishman returning home from war after having been seriously wounded and shell shocked. Any mention of anything
German to him was sufficient to arouse his anger and it was evident that the shock he had suffered was still close to the surface. Through the Soldier Settlement Board, he had purchased a farm, together with equipment, a number of cows and four work horses. I was with him when he went to buy a team from a neighbor he had not met but who had been recommended to him very highly as a man who raised good Belgian stock.

After choosing the team to his liking, he enquired of the owner as to what names he had given them. When he was told that the names were Fritz and Hans, he promptly took a second and third look at the other teams offered for sale, stating in no uncertain terms that he would have nothing around him, not even a horse, which would remind him of anything German.

Despite this, however, this team constituted his number one choice, so after some discussion with the owner and with me, because I would be driving the team, it was decided that we would re-christen them and we took them home as Prince and Dan. I worked for this man all one summer and more than once when the horses stepped over their traces or refused to stop when he shouted "whoa," he entertained them with a tirade about their early association with the Germans. (4)

Not even livestock was immune from the prejudice, so I doubt that he was able to escape it altogether.

Chapter Ten Continued: Heeding the Call of the Fatherland