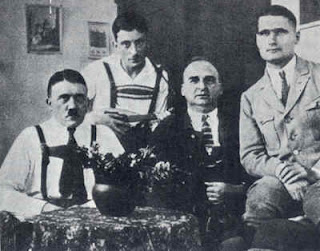 They had also learned how to use the press to their advantage, by making Hitler's Brown Shirts visible. Constant marches and rabble rousing, kept their name and images in the newspaper, and they were able to feed off that notoriety.

Not that they didn't meet with opposition. After hearing Hitler speak, Konrad Heiden, then a university student, tried to organize against them:

In 1923, as the leader of a small democratic organization in the University of Munich, I tried, with all the earnestness of youth, and with complete lack of success, to annihilate Hitler by means of pro test parades, mass meetings, and giant posters. And so I am entitled to call myself the oldest - or one of the oldest anti-Nazis now in the United States, for there cannot be many in this country who came into conflict with Adolf Hitler and his handful of followers at: so early a date.

Those who experience history and have a share in its making rarely see the enduring threads but only the whirl of exciting and quickly forgotten details. In 1920, and the years following, my friends and I certainly did not view our modest fist-fights and other encounters with the National Socialists as an attempt to put a premature end to the career of the modern Genghis Khan, and I would have jeered at anyone who had prophesied that this was the beginning of a new epoch in world history. (1)

It was actually Heiden who first gave them the name Nazi, a Bavarian slang word meaning "country bumpkin". He would later infiltrate the group as they marched toward a beer hall in Munich, ready to overthrow the government and seize power in November of 1923.

Besides a large following and a platform, the 'Nazis' (country bumpkins) also had their own little army under the leadership of General Ludendorff * (who reminds me of Sergeant Schultz from Hogan's Heroes), and their own newspaper. It was time.

They chose the five year anniversary (November 9, 1923) of the abdication of Kaiser Wilhelm and prepared for battle in his name.

Under cover of darkness General Erich von Ludendorff, flagitious, inscrutable, unrelenting, sallied forth into the streets of Munich, capital of Bavaria, accompanied by his faithful Austrian, Herr Adolf Hitler, to make a coup for the Hohenzollerns by way of celebrating Nov. 9, the fifth anniversary of the abdication of the then Kaiser of Doorn.

With unerring instinct they led their men to a beerhouse, called the Bügerbrau Keller, famed Bavarian cellar. Within was Bavarian Dictator von Kahr, Minister President von Knilling, Minister of Interior Schweier and some others. Dr. von Kahr was in the middle of outlining his state policy in which he denounced Marxism, when the door opened and in walked Herr Hitler and General von Ludendorff with some of their followers, who fired a few shots into the ceiling by way of effect.

Herr Hitler declared the Bavarian Government had been superseded and elected himself not only head of Bavaria but Chancellor of all Germany.

Dr. von Kahr was offered the post of National Protector, à la Horthy in Hungary, which he accepted. His companions, Minister President von Knilling and Minister of Interior Schweier, were arrested and imprisoned. General Ludendorff was given command of the Army, which he accepted, and said: "We have reached the turning point in the history of Germany and the world. God bless our work!"

After this distribution of gifts by fairy godfather Hitler, there was wild talk of a march on Berlin, the destruction of the Treaty of Versailles, the deposition of President Ebert and the Berlin Government.

Everything seemed to be " going " well enough. The people cheered Ludendorff when he swaggered in or out of anywhere. The Hitler storm troops were in possession of the city and the sun was shining brightly on the following day. " Chancellor" Hitler and " Commander-in-Chief" von Ludendorff were within the War Office when the loyal Bavarian Reichswehr, commanded by the " disloyal" (to Berlin) General von Lossow, stormed the building, and after a short battle the "beer hall revolt" was crushed.

It appeared that Dictator von Kahr and General von Lossow were entirely out of sympathy with the movement and declared that their agreement with the Hitler move was forced by duress. After leaving the Bürgerbrau Keller, Dr. von Kahr had conferred with General von Lossow and they decided to suppress the revolt with the faithful Reichswehr (defense force). Ex-Bavarian Crown Prince Rupprecht, head of the Wittelsbach dynasty, emphatically repudiated the revolutionary movement.

In Berlin the news of the coup was received with undisguised alarm, despite subsequent contrary statements. President Ebert issued an appeal to the nation, an emergency Cabinet meeting was held, troops were ordered out by General von Seeckt, Commander-in-Chief of the Reichswehr. Hardly had this been done when the news was flashed from Munich that the revolt had been crushed.

Meanwhile in Munich Dr. von Kahr and General von Lossow quickly restored order. Minister President von Knilling and Minister of Interior Schweier were released and resumed their duties. Herr Hitler escaped from his enemies without hurt, but was found several days later hiding in the house of one, Ernst Franz Hanfstaengl, said to be a Harvard graduate and former Manhattan art dealer.

Ludendorff was captured by the Reichswehr, but released after having given his parole not to plot against the Bavarian Government. Once free, however, he determined not to become the scapegoat of a beer-house brawl. With characteristic defiance he declared that he was bound only by his honor to refrain from attacking the Government while his and Hitler's conduct were under consideration. Beyond that he considered himself free to work for the Hohenzollern's return.

Thus it was clear that the career of a great German general is not over; that his iron fist, which proved stronger than that of Generalfeldmarschall von Hindenberg during the latter part of the War, is not rusty; that he is still intent upon being treated as a monster and not a weakling, a soldier of the old brigade and not a great pure fool. Perhaps, next putsch, he will not frolic with political opportunists such as Hitler. (2)

Also involved in the Putsch, were Dietrich EcKart, who was arrested and imprisoned, but later released due to poor health. He died of a heart attack on December 23, 1923. And Max Scheubner-Richter, who walked arm-in-arm with Hitler as they marched toward laying claim to Berlin (yes, it would be a very long march). He was shot and killed, but took Hitler down with him, who dislocated his shoulder as he fell.

Hitler would indeed hide out in the home of Ernst Franz Hanfstaengl, a close confidante. But Ernest wasn't there. He had also taken part in the beer hall revolt, and had escaped to Austria. But Hitler spent the time with his wife, and when the police came to arrest him, it is said that she talked him out of committing suicide.

Many people who write the story of Adolf Hitler and the Nazi party will cite many times when Hitler could have been stopped, and this is one of them. However, I don't believe that would have made much of a difference. This was a very powerful movement, and if not Hitler, then it probably would have been someone else.

But his arrest and subsequent conviction, only made him appear as a martyr for the cause, and though the movement was forced underground, Hitler's popularity continued to grow. He had created a charismatic cult, and the powerful forces driving the party, knew how to exploit it.