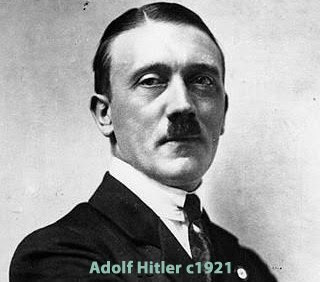 "Only the ruin of all made him ruler over all." Konrad Heiden

Adolf Hitler was an unlikely politician, and even less likely a world leader. And yet this very ordinary man became an extraordinary public figure, whose face is one of the most recognizable in the western world, even more than half a century after his death.
There have been many books written about his rise to power, using his childhood as an excuse for his later evil.
But I see something else. I see him as more of a protagonist. The central character in a literary plot. The leading actor cast by successful playwright and stage director Dietrich Eckart, who was with him almost constantly after discovering him in a beer hall in Munich.
He taught him how to speak and how to use his arms for dramatic effect. Characteristics that might have been seen as flaws by others, were exploited. Hitler's natural jerky movements, and gravelly voice as a result of mustard gas during the war, all played into the mystique.
His character: Vladimir Soloviev's Antichrist.
And when studying the creation of Adolf Hitler, it's not too difficult to recognize a familiar pattern. He is probably the best case study for the phenomenon of image politics. A chameleon who would become the perfect personification of the leader of many causes, while being the champion of none.
Because the only thing that Adolf Hitler really believed in, was his own greatness.
The Validity of a Movement
When members of the Thule Society came up with the idea of creating a party, it was the natural progression of an organization that was becoming increasingly political. They viewed the lawlessness of post-war Germany as a threat to their cause.
Rape, promiscuity and abortion was on the rise. The grand plan of creating a perfect Aryan race was becoming less attainable. There was a "Jewish conspiracy" to take over the world. They needed a miracle.
But that miracle did not arrive as the result of the efforts of the upper echelon of the Thule Society, who were holding seances to conjure one up; but from one of the lower members who creatively "conjured up" the long awaited saviour of the Teutonic races.
And while the resulting party would be one based purely on ideology - the ideology of a society that dabbled in the occult; the infrastructure for such a party was built through earthly endeavours.
Before assuming power they spent more than a decade creating a shadow government, shaping public opinion and selling the idea of a noble cause. To German citizens they were going to save Germany and to the moneyed people of the Thule Society, they were going to save the Aryan race.
But such lofty goals could not be achieved without a veritable army. An army of what Heiden would call "armed intellectuals".

... thousands of youthful, ex-Army officers were streaming back from defeat to poverty and unemployment in the Weimar Republic. They were "armed intellectuals," war-hardened products of Germany's prewar universities. They became an army of the armed bohemians, of heroes and murderers by conviction .

. . They had lost prestige, social position, ideals—"tossed this way and that way," wrote one of them, "just for the sake of our daily bread; gathering men about us and playing soldiers with them; brawling and drinking, roaring and smashing windows—destroying and shattering" . . . They drew to them the flotsam, the stragglers living on the fringe of their class . . . the unemployed . . . the declassed of all classes .... an upper layer that has lost its hold in society seeks the people and finds the rabble ...

... They found their leader in the lowest mass of their subordinates. The spirit of history, in its fantastic mockery, could not have drawn an apter figure. Raving Dervish ... the [formerly] homeless derelict from the Viennese melting pot ...this man who exhorted them with all the semi-education of his age, using miserable German, defective logic, tasteless humor and false pathos ... (1)

And they would soon draw more foot soldiers from all levels of society. Labourers, teachers, public servants et al; all saw in Adolf Hitler what they wanted to see. A man who represented them.
Gottfried Feder and Party Economics 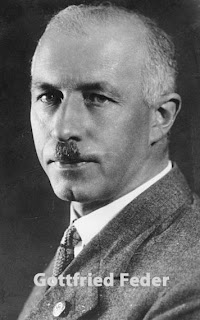 Just as William Aberhart's Social Credit Party was intent on changing the way that Alberta handled it's finances, the Thule Society that was grooming Adolf Hitler, also had plans to change the way the Germany did business.
As part of his indoctrination Adolf was introduced to another Thule member, Gottfried Feder, and it is said that he finally agreed to join the German Worker's Party after listening to Feder speak. (2)

Feder's lecture was about "Jewish finance capitalism" and he showed an open hostility towards wealthy bankers and spoke of 'breaking the shackles of interest'. He believed that all German banks should be nationalized and he called for the abolishment of interest.

In February 1920, together with Adolf Hitler and Anton Drexler, Feder drafted a paper, called the "25 points" which became the party's platform. When the paper was announced on February 14, 1920, more than 2,000 people attended the rally.
And just as Social Credit clubs were springing up across Alberta, a momentum was building for a regime change in Germany. Finally there was a political movement with clear plans to rescue the country from sure ruin.
Chapter Sixteen Continued: The Beer Hall Putsch
Footnotes:
*He would later have to tone down the rhetoric, because of the heavy support to the party by wealthy industrialists and would only become the under-secretary to the minister of economics, when the future Nazi Party formed a government.
Sources:
1. Master of the Masses, Time Magazine, February 07, 1944
2. Hitler: Profiles in Power, by: Ian Kershaw, Longman House UK, 1991, ISBN: 0-582-08053-3, Pg. 21
Posted by Emily Dee at 2:09 PM