Chapter Sixteen: The Makings of a Political Party 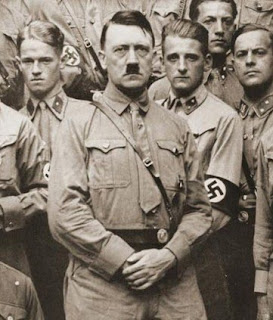 After the first world war, Adolf Hitler may have felt a sense of abandonment. Throughout the war years, he was at home in the military, but Germany's defeat left it's scars. He would have preferred to fight to the last man for the Fatherland.

Now a civilian employee with the German Army, his duties were to rout out dissidents to the new regime, but his heart wasn't it.

Eventually he joined a group of ex-soldiers called the Freikorps ("Free Corps") or "Iron Fists", a paramilitary organization with little sense of loyalty to the government of the day.

Another member of this rowdy bunch, was Rudolf Hess, though he claimed not to remember seeing Hitler at any of the meetings or excursions.

This wasn't unusual. Hitler was quite forgettable in the early days.

Hess was also a member of the Thule Society, though he didn't join the affiliated German Worker's Party (future Nazis) until May of 1920, after hearing Adolf Hitler speak.

By then the formerly sullen Adolf, had undergone his transformation at the hands of Dietrich Eckart, one of the most successful directors in Germany at the time. Speech lessons from Eckart and others experienced at elocution; his performances now took on a theatrical air. The resulting, almost hypnotic voice, was in part due the effects of the mustard gas, that meant he had to use extra force to get the words out. (1)

The photo above with his 'brown shirts', almost looks like a poster for a play, with exaggerated anger and staged positioning. You could envision them bursting through the facade, and breaking into a little soft shoe or sand slide with Eckart calling out "Brush back, Pull back, spank..."

Of course the end results of this movement was anything but a tap dance, as Adolf learned how to emote anger too well, and was no longer acting.

Below is just a small sampling of his theatrical speaking, though I'm sure most people are far too familiar with it already.

Strauss actually wanted to join the party (during these days), but was turned away because he was Jewish. And Hayek after serving as director of the Austrian Institute in the late 1920's, before moving to the London School; decided not to return home because the Nazis then had control of Austria.

In his book The Road to Serfdom, that has become the Bible to free marketeers, like Ronald Reagan, Margaret Thatcher and Stephen Harper; Hayek includes a chapter: "The Socialist Roots of Nazism." Adolf Hitler was part of his history.

Leo Strauss detested liberalism and claimed that he was not a conservative. So in that way, neoconservatism was perfect, because it was not liberal or conservative. It's principles are loosely based on a fascist model, that supports a centralized authority, censorship and "the will and ability to commit violence and wage war in order to keep the nation strong." (2)

The fact that Strauss suggested adding "religious fervour" to "control the ignorant masses", fits with the social conservative elements of William Aberhart and his Social Credit Party.