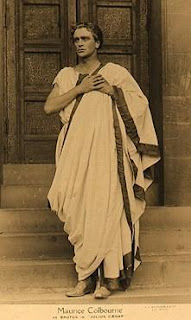 "The fault, dear Brutus, is not in our stars, But in ourselves, that we are underlings." Julius Ceasar By: William Shakespeare

In 1929 William Aberhart met a man by the name of Charles M. Scarborough, who first introduced him to the principles of Social Credit, as created by Major Clifford Douglas.

At first Aberhart ignored the books loaned him by Scarborough. No doubt this was in part because he would have had a great deal of difficulty grasping the complicated theories.

But since both men were school teachers, they met on an annual basis, while marking exams in Edmonton. Scarborough had heard Aberhart on the radio, and while he didn't ascribe to his radical Biblical interpretations, he felt that the man had the power and means to get the message out to the public.

"It struck me at the time," he has recorded, "that Aberhart would be the man who could launch an educational programme on monetary reform. Anyone hearing him in those days would certainly agree that he could sway his audiences. One could not help but recognize his dynamic personality and gift of oratory." (1)

But then the stock market crashed and Alberta was hit hard ,and Aberhart began to feel a sense of powerlessness. He still preached on a regular basis and elicited prayers on his radio broadcasts, but the situation only worsened. Then when one of his best students committed suicide, because of the effect that economic hardships had on his family, Aberhart began looking for more earthly solutions.

So when he met Scarborough again in July of 1932, he had a more open mind. And this time instead of discussing Douglas's books, Scarborough loaned him a copy of a simplified outline of Social Credit principles, written by the dramatic actor; Maurice Dale Colbourne: Employment or War. Together they discussed how he could work these theories into his radio broadcasts.

So without mentioning the term Social Credit, he approached the Prophetic Bible Institute's executive board, asking whether or not, given the current situation; they believed that economics would be a proper subject for inclusion in his Sunday lectures. They approved and Aberhart jumped in with both feet.

"Time to do Some Thinking! Every citizen of Canada should do some serious thinking regarding the present economic situation. To encourage this a series of lectures on the Bible and modern economics will be given at the Calgary Prophetic Bible Institute." (2)

What he offered his followers was a Utopian solution to a global problem; and the promise of salvation that would reap rewards in heaven and on earth. Even those who felt that his radio program was nothing more than the "rantings of a madman", listened and took up the cause.

No interest loans and cash dividends for every adult. What was not to like?

Chapter Fifteen Continued: Out of the Rubble Steps a Saviour