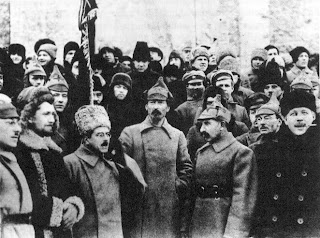 Russia in the early 19th century was a place of much turmoil. Czar Nicholas II, though a good family man, was an incompetent leader, and when war broke out he went to play soldier instead of addressing matters at home.

And while Russia was at war, there was an internal war taking place on many fronts. The fraudulent Protocols of Zion, had resulted in pogroms, as the Jewish people were now thought to be behind a conspiracy to take over the world. A mass exodus took place, and for those who chose to stay, anti-Semitism was rampant and often violent.

Vladimir Lenin opposed the Imperialistic war, and instead was promoting a class war. While practising law, he worked on mostly land-ownership cases, where he gained insight to the Russian peasants' socio-economic condition. As a result he developed a political system he called Leninism, which was described as a pragmatic Marxism and often referred to as Lenin-Marxism.
Vladimir was in Switzerland at the time of the February Revolution that saw the Czar Nicholas II deposed, but with the help of the Germans, he was able to get safely back to Russia to join in the powder keg of revolt.

With the end of the Romanov dynasty an alliance between liberals and socialists formed a provisional government, committed to political reform, by creating a democratically-elected executive and assembly.

However, this new government failed, in part because they agreed to continue their participation in the Great War, and the riots continued, finally culminating in the October Revolution that saw the Bolshevik government under Lenin gain power, and the country was thrown into civil war.

On August 30, 1918 the head of the Petrograd secret police was assassinated, and a would be assassin tried and failed to take out Lenin. In retaliation many members of the royal family and those loyal to the White Army, a counter-revolutionary force, were rounded up and arrested. 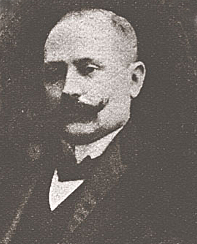 On September 6, 1918, 25 armed men entered the home of Count Pavel Nikolayevich Ignatiev and his wife Princess Natalya Meshcherskaya. Pavel was arrested and held with counter-revolutionary prisoners, all slated for execution.

He had been the education minister at the Imperial Court, but was a Ukranian farmer of some means. Against the protests of her family and friends, Natalyan followed her husband demanding his release. But it wasn't until a geography teacher heard that Pavel had been arrested and was being held that his luck changed.

The teacher, remembering that Pavel had been instrumental in improving the educational system in the country, organized a student protest and as a result the ailing Pavel was allowed to return to his family.

However, they were constantly tormented. Their home was looted seventeen times, the final government sanctioned robbery netting what was left in their children's dresser drawers.

Finally forced to flee*, they eventually settled in Upper Melbourne, Quebec, where Pavel would return to his first love; farming.

One of his five sons George, would grow up to become a long serving Russian-Canadian diplomat and personal assistant to the Canadian High Commissioner in London, Vincent Massey. He would marry Massey's niece, Alison Grant, the granddaughter of the famous George Munro Grant, who played an integral role in Confederation.

George and Alison's eldest son Michael Ignatieff is now leader of the Liberal Party of Canada, following a long tradition of political involvement.

Pavel and Natalyan are better known as Paul and Natasia Ignatieff. She died in 1944 and the New York Times wrote of her death in an article entitled 'Princess Ignatieff'. Paul died in 1945.

* Two brothers Terentiy and Lukyanov also fled from the Ukraine during the Russian Revolution, settling in Chicago. Terentiy Lavrentievich's wife Anna and son Zinoviy, had fled with him, and eventually they made their way to Brantford Ontario, where four more children would be born: Fedor, Vasiliy, Ekaterina, and Olga.

About 1930 conditions in their homeland had improved and Anna wanted to return, but Terentiy preferred to stay in Canada, so the family separated. He would then marry a Polish girl, Mary of Pidhaytsi, Ukraine, and they would have a son named Walter who would eventually have a son named Wayne, who would grow up to be the greatest hockey player that ever lived.