The image to the left is of a young Ernest Manning, taken when he arrived in Calgary from Rosetown Saskatchewan; to study at the Calgary Prophetic Bible Institute, under the direction of William Aberhart.

What makes this movement and it's various experiments in creating political parties unique, is that it became hereditary in many ways; which is another reason why their ideology has not changed much in seventy five years.

Ernest was a constant companion of William Aberhart's, both at the Prophetic Institute and later in the Social Credit Party. He lived with the Aberharts, had his meals with them, went to Church with them and even acted as their chauffeur.

By 1930 he was sharing some of the airtime on the radio program, giving sermons and teaching the prophesy at the Institute and worked with Aberhart to sell Social Credit.

By all accounts, he was very much like William's son and when Aberhart died, Ernest Manning just took over.

Then when Ernest's son Preston created the Reform Party, Stephen Harper assumed the role of Preston's lieutenant. And even for the short time that Stockwell Day was head of the Alliance Party; Day's father had been a long time member of the Social Credit Party, once running as a candidate against Tommy Douglas, the man who gave us Medicare*.

The federal SoCreds went a little different way, but they were all connected.


Swing Girls and Rolled Up Rugs 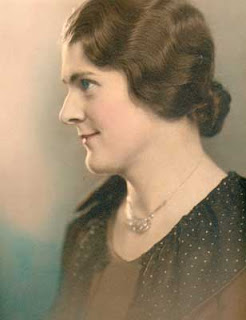 In 1929, a young typist, then working at the General Motors Acceptance Corporation, Eva Reid; was looking for a place to live. Her sister had died the year before and she had started to turn to religion, studying part-time at the Calgary Prophetic Bible Institute.

It just so happened that Aberhart had a room for rent, so the young girl packed up her things and moved into the Aberhart home.

Then just a teenager, Muriel had been a favourite student of Aberhart's at Crescent Heights, and she would often visit the family.

One evening when Eva and Muriel were alone at the Aberhart house, Eva decided to bend the house rules a little. She rolled up the rug, turned on the music and taught the teenage girl how to dance. They both laughed and enjoyed themselves immensely.

But a few days later, overwhelmed with guilt, she confessed her deeds to William Aberhart. He said that he forgave her moment of weakness, but demanded that as a sinner she must "condemn" herself. What this meant I can only imagine, but not long after the incident, Eva Reid moved out of the Aberhart home. (1)

She later became a popular reporter and even helped to edit the future Social Credit Chronicle.

Oh and the other sinner?

Muriel Aileen Preston would marry Ernest Charles Manning on April 14, 1936, and then Premier William Aberhart, gave the bride away.

*Those in the Reform movement never believed in free health care (and they still don't). Ernest Manning called Tommy Douglas a socialist and saw his ideas as akin to communism: Throughout his political career, Ernest Manning was motivated by religion, and more specifically, by anti-Socialism: 'Socialism, to Manning, is a system which largely prevents the individual from attaining the state of grace and hence salvation ... Giving to the individual societal benefits such as free medical care ... breeds idleness... causing a break down in his relationship with God'."Manning argued that 'where the state imposed a monopoly on a service ... the sinful philosophy of state collectivism scored a victory'. (2)