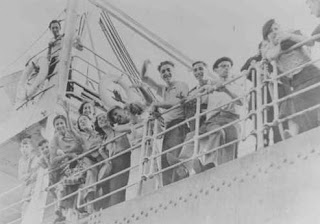 Leo Strauss was not immune to the spell of the youth movements that became increasingly popular in Germany after the war, and he would become an active participant in the Zionist Youth Blau-Weiss, then led by Walter Moses.

And while the group enjoyed the typical hikes in the mountains, they were also very militaristic. Strauss would refer to it as pagan-fascism, and indeed Moses liked to imitate Mussolini, who had come to power in 1922.

It was here that Strauss claimed to have nurtured his authoritarianism, and the concept of a clique* led by a dictatorial style leader. As early as 1923 he spoke of a preference for a quasi-totalitarianism, and detested “bourgeois” or “liberals” seeking to preserve their lives and comfort.

For Walter Moses his passion was encouraging Jewish people to emigrate to Palestine, but not as an escape from being German, something that was always important; but to establish a settlement where they could live peacefully, while maintaining their German culture.**

In 1926, Moses helped to create a settlement in Palestine, and began training young German Jews, preparing them for their Aliyah (1). He became a partner in the Dubek cigarette factory, and would spend most of his adult life in Palestine, where he was listed as an industrialist. He was also an avid collector of ancient glassware, and was the founder of the Haaretz Museum in Tel Aviv, now called the Eretz-Israel Museum.

Meanwhile, Strauss had earned his doctorate from the University of Hamburg in 1921 and gained employment at the Academy of Jewish Research in Berlin. He often contributed articles in Zionist publications and was a popular lecturer at the Free Jewish House of Study.

He was at times controversial but he challenged others to think, even if he didn't change their minds. He would later accept a position in Paris, and because of the rise of Hitler to power, chose not to return to Germany.

He would later create an ethical theory he called Reductio ad Hitlerum, which had become a guilt by association, slippery slope, argument. He noted that not everything attributed to Adolf Hitler was bad just because he was. Hitler was anti-smoking, loved dogs and was (supposedly) a vegetarian.

Ian Kershaw makes a similar argument, from the other end of the spectrum. He reminds us that Adolf Hitler did not act alone, yet his name has become the embodiment of the Nazi era, while ignoring the political powers and capitalist interests*** that helped to elevate him to power. (3)

* The Reform Party called themselves populist, but it became clear to many people that it was far from a grassroots operation : Dissidents in the party ... openly claimed that the party was being run by a 'Calgary clique' "A lot of people are frustrated - we're seeing the inevitable erosion of grassroots politics into a smaller more domineering group at the top... (The 'clique' that was being criticized in 1990 consisted of Manning and four of his staff members.) One of the key members was thirty-two-year-old Stephen Harper, a founding member of the party, it's Chief Policy Officer, and the man who became known as Manning's chief political lieutenant. (4)

**Ironically, not all Jews in Palestine would be welcoming to the German refugees in time. One political leader, Eliezer Yafe, wrote: "There is a great danger to the community from the Hitler Zionists, after their Vaterland vomited them out. Is it not possible that they will wish to have their own German schools, a German hospital?" (2)

*** Prescott Bush, George Bush's grandfather, apparently made a fortune financing the Nazi party through the Union Bank. His assets were seized in 1942 under the Trading with the Enemy Act, but were returned after the war. However, a civil action for damages being brought in Germany against the Bush family by two former slave labourers at Auschwitz brought the story to the forefront. And while the Bush family state emphatically that Prescott was not a Nazi sympathizer, he was a profiteer. Isn't it ironic? (5)

2. The Migration Experience as Expressed in the Arts: The Contribution of the Immigrants from Germany -Prof. Nurith Kenaan-Kedar, Department of Art History, Tel Aviv University, June, 2006

5. How Bush's grandfather helped Hitler's rise to power, By Ben Aris and Duncan Campbell, UK Guardian, September 25, 2004
Posted by Emily Dee at 8:33 AM