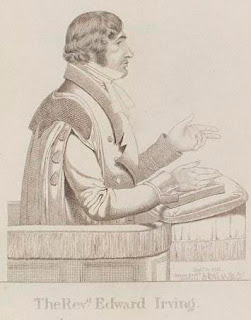 Oh! it is needed, much needed at present, a leading back to the cross. I saw that night, and often since, that there will be an outpouring of the Spirit on the body, such as has not been, a baptism of fire, that all the dross may be put away. Oh there must and will be such an indwelling of the living God as has not been—the servants of God sealed in their foreheads—great conformity to Jesus—his holy holy image seen in his people. Margaret MacDonald Visionary (1)

The notion of the Rapture and an Antichrist, has been around for centuries, but it first gained prominence in the modern world, due to the efforts of a Scottish theologian by the name of Edward Irving.

Irving was a scholar whose circles would be other scholars and members of the upper class. However, when he first put his theories to the test, they were mostly scoffed at by his peers. As a result, he was lampooned in Christian journals and dismissed as being a lunatic.

So instead Irving found his disciples amongst the poor and down trodden, who would come to be known as Irvingites. To many then and now, this was really a cult, that engaged in questionable rituals, which included speaking in tongues.

But one family that enjoyed these orgasmic liturgies, were the MacDonalds of Port Glasgow, Scotland; and apparently during one of their ceremonies in 1830, 15 year-old Margaret MacDonald had a vision of the Rapture. She wrote everything down in a lengthy dissertation, or relayed it and someone else wrote it down, which was delivered to leading members of the clergy. The quote above was part of it.

Now I'm not trying to question a person's religious beliefs, but am just trying to provide a history of this movement. However, I question this story, simply because it's highly unlikely that Miss MacDonald could have created such a scholarly account. I think that it was probably written by Irving, and distributed to the religious hierarchy, in an attempt to validate his claims. I've no doubt that she had a vision, but it was probably inspired by notions already planted by the good Reverend.

In 2000, when Stockwell Day was running as leader of the Alliance Party, to oust then Prime Minister Jean Chretien, journalist and author Gordon Laird investigated Day's past, in particular his days spent in Bentley Alberta as a lay preacher (Day has had no formal training and in fact holds only a high school diploma). Laird interviewed the man who took over from Day when he left to run for political office in the provincial legislature.

Gregory Rathjen says that when Day left in 1985 to pursue a political career, the assistant pastor left behind a community that was deeply divided. Rathjen arrived in 1986 to a disaster: a demoralized congregation had shrunk almost by half, allegations of fraud were afoot, and the church owed $12,000 to creditors.

Factions were warring. It was a dark time in Bentley. "The church leaders had risen to unquestioned authority," explains Rathjen. "They had moved away from the congregational government with the assumption "You're here to serve and not ask questions." Rathjen reports that, before its collapse, the former Bentley Christian Centre was a renegade Pentecostal church that instituted a divine mandate to replace grassroots congregational representation.

Throughout this period, Stockwell Day was assistant pastor and school administrator. "They changed their by-laws so that the people would have no say - leaders to be appointed by other leaders, as determined by scripture," explains Rathjen. "It was a haughty, arrogant, pride-filled success story that led to disaster." Fuelled by American-style revivalism, the church emphasized radical gospel practices - such as speaking-in-tongues - that whipped worshippers into a frenzy. "They have emotional experiences and then try to build a doctrine around it," explains Rathjen. The intensity of the church and constant stream of visiting American pastors gave Bentley an international profile within fundamentalist circles. But the church eventually succumbed to its own extremes. "I would say that it was as close to a cult as you can get," says pastor Rathjen. (2)

This sounds very much like the rituals created by Reverend Irving. 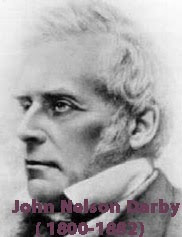 One of the religious leaders who may have received a copy of Mary MacDonald's dissertation, was John Nelson Darby, a kind of renegade Irish-Anglican evangelical, who came to represent the Plymouth Brethren. He is also credited with being the father of modern day dispensationalism.

The story, or at least one of them, is that Darby visited with MacDonald and immediately inserted her visions into his dispensationalist theories.

However, I don't believe that was done until later, inserted for other reasons, which I will describe later.

What is known is that Darby fell off his horse about 1830, and while recovering, began to study the Book of Revelations in earnest, and from them created his dispensations.

There are seven of them, the first being Adam and Eve and the Garden of Eden. This is followed by Noah and the flood, Abraham, Israelites, Gentiles, the Holy Spirit and the Millennium. The first six ended in failure.

However, according to author C.H. Fisher, and several others, Darby did not incorporate his new rapture theories into his text. In the December 1830 issue of "The Christian Herald, he was still supporting the ancient tradition, and continued to do so until 1839. "Later on in the nineteenth century Darby incorporated the idea of the any-moment secret into a last-days scheme which has come to be known as Dispensationalism." (3)

And indeed it was a scheme.

3. Pretribulation Rapture: What if it Isn't True?, By: C. H. Fisher, Chapter Four