Despite his best efforts, William Aberhart would never really succeed in adopting Social Credit principles. And even though his party was called Social Credit, their governing was based on theology, and a form of Social Conservatism emerged, that became increasingly cult-like.

Individuals were discouraged from thinking for themselves. They didn't need to understand what he was doing, they were just to simply follow him and he would lead them to glory. And if there were any doubters, they would be set to right in one of his radio broadcasts.

He was soon directing every aspect of their lives from the pulpit, and it often had devastating results. If he was fanatical before, he became worse, especially if he felt his power was being threatened.

His protege, Ernest Manning; would use similar techniques as he broadcast his own Bible Hour, hammering out his government's position. And like Aberhart before him and all those after; he allowed no dissent. While many credit him with purging the party of it's anti-Semites, it was only because they were putting pressure on him to start adopting the monetary reforms of Clifford Douglas.

So the purge was not a magnanimous gesture, but was simply for political expediency.

And the basic principles of this movement have not changed. There has always been a radical religious element that directs most of their policy making, coupled with an extreme prejudice against anyone who doesn't believe as they do.

They demonize their enemies and use fear mongering, intimidation and emotional blackmail to get what they want. And despite the liberal use of the words 'freedom' and 'democracy', they oppose those notions with a vengeance.Theirs is a one party state:


"We don't need an opposition," Ernest Manning has said. "They're just a hindrance to us. You don't hire a man to do a job and then hire another man to hinder him." (1) 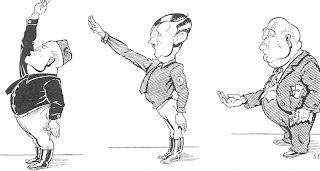 In the first part of this book, I wanted to tell the stories of contemporaries William Aberhart, Adolf Hitler and Leo Strauss, since all play a very huge role in the Social Conservative (Reform) movement, that brought Stephen Harper and his "reinvented" Conservative Party to power.

We have to remember that as this story has unfolded so far, few imagined that anything as horrific as The Holocaust could have taken place.

But both Hitler's German Worker's Party and Aberhart's Social Credit Party, were grounded in anti-Semitism and the notion of an international Jewish conspiracy.

Both blamed the Jewish people for many of their ills, and both came to power and held onto power, based on fascist style governing.

You can see from the cartoon of Stewart Cameron's, which was published in the 1930's; that it was not unusual to compare William Aberhart to both Mussolini and Hitler, and many newspaper columns reflected the same observation.

At the peak of the depression, everyone was looking for answers. Radical governments were on the rise, all promising to create stability out of chaos, and lead their people from the wreckage.

What has happened in modern times, is that we only judge Adolf Hitler and the Nazi Regime, from their darkest days. And believe me, they don't get much darker. On the other hand, history has tended to forgive William Aberhart, and yet there was a time, when he also plunged Alberta into darkness.

Nothing to the extent of the Holocaust, but damaging none the less.

So that is where my story will continue, as fascism becomes the norm. And remember, Leo Strauss was nurtured on this authoritarian style, and once regretted that he was not allowed to join the Nazi party because he was Jewish.