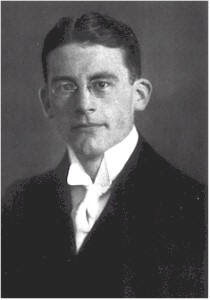 Carl Schmitt, was a German philosopher, law professor and devout anti-Semitic. On May 1, 1933; he joined Adolf Hitler's National Socialist German Workers' Party or NSDAP (name changed from simply German Worker's Party) and was quickly appointed to the position of Prussian State Counselor by Hermann Göring.

He was also made the president of the Union of National-Socialist Jurists and it is believed that many of his theories became the ideological foundation for a Nazi dictatorship, and the basis for it's extreme authoritarianism.

There is a kind of darkness here that emanates from his writing and penetrates the reader. As a longstanding fighter against the pseudoscience of eugenics, ingredient to IQ testing, and Nazism, I thought myself pretty steeled (so far as one can be) against lethal anti-semitism. But Schmitt’s Catholic and medieval anti-semitism I found hard to absorb – it has a creepiness, an indiscriminate murderousness, and a demonism about “masks” which goes right to the gut. (1)

As chairman of a law teachers' Convention in Berlin in October 1936, Schmitt demanded that German law be cleansed of the "Jewish spirit" and future publications by Jewish scientists be marked with a small symbol.

The Beginnings of a Strange Relationship:

In 1926, Schmitt had published one of his most famous works: The Concept of the Political, that very much impressed the budding Jewish philosopher, Leo Strauss.

Strauss would send Schmitt a list of comments and criticisms, that so inspired him that he would make changes in future editions based on Leo's notes. He just wouldn't acknowledge that they came from him.

The two men did engage in regular correspondence, and Carl Schmitt was instrumental in Strauss' receiving a Rockefeller Fellowship *, enabling him to leave Germany for Paris, thereby escaping the fate of many others. At that time, they broke off their relationship and Strauss wrote from Paris fuming that Schmitt would not acknowledge his contribution to the later editions. He obviously forgot that he was Jewish and how the other man felt about Jews. (1)

However, Strauss would later tell a girlfriend, Hannah Arendt, that "he wanted to join a party which would not have him because he was a Jew." This of course was the Nazi Party. Strauss says of Hitler, that his “political theology” was hostile toward “me and my kind,” but Gilbert suggests that Strauss was not put off by Schmitt’s anti-Semitism because Strauss, too, had quite a streak of it. (1)

Many have suggested that Neoconservatism, based on Leo Strauss's teachings, was deeply influenced by Carl Schmitt. This authoritarian nature has certainly been adopted by neocon leaders like George Bush and Stephen Harper**.

However, while Strauss is often blamed for the actions of the Bush administration, there are at least some who attribute them to Schmitt himself.

"... although some analysts have suggested that the Bush Administration has operated under the guidance of the ideas of German emigré Leo Strauss, it seems far more plausible to suggest that the true éminence grise of the administration, particularly with regard to issues surrounding the possible propriety of torture, is Schmitt."

In a similar vein, Scott Horton, chairman of the International Law Committee of the New York City Bar Association and adjunct Professor at Columbia University published a note on "Balkanization" on Nov. 7, titled "The Return of Carl Schmitt." In discussing Justice Department lawyer John Yoo's advice that the Executive Branch was not bound by the Geneva Conventions and similar international instruments in its conduct of the war in Iraq, Horton writes, "Yoo's public arguments and statements suggest the strong influence of one thinker: Carl Schmitt." (2)

Schmitt died on April 22, 1985, and his obituary appeared in Time Magazine:

DIED. Carl Schmitt, 96, controversial German legal and political philosopher, sometimes called the Crown Jurist of the Third Reich, whose pro-authoritarian theories of government profoundly influenced the course of his country; in Plettenberg, West Germany. From 1929 to 1933, he provided legal and theoretical justifications for the Hindenburg government's dictatorial emergency decree system. Schmitt warned against a Nazi takeover, but his right-wing views became identified with the movement, and when Adolf Hitler took power in 1933, Schmitt opportunistically switched with the tide, becoming Prussian state councilor under Hermann Goring. He avoided prosecution as a war criminal at Nuremberg and later largely kept his vow to retreat "into the security of silence." (3)

*Heinrich Meier wrote a book on the shared philosophies of the two men: Carl Schmitt and Leo Strauss: The Hidden Dialogue

** According to Donald Gutstein in his piece Harper, Bush Share Roots in Controversial Philosophy: "What do close advisors to Stephen Harper and George W. Bush have in common? They reflect the disturbing teachings of Leo Strauss, the German-Jewish émigré who spawned the neoconservative movement."