The anti-Jewish riots in Kishinev, Bessarabia, are worse than the censor will permit to publish. There was a well laid-out plan for the general massacre of Jews on the day following the Russian Easter. The mob was led by priests, and the general cry, "Kill the Jews," was taken- up all over the city. The Jews were taken wholly unaware and were slaughtered like sheep. The dead number 120 and the injured about 500. The scenes of horror attending this massacre are beyond description. Babes were literally torn to pieces by the frenzied and bloodthirsty mob. The local police made no attempt to check the reign of terror. At sunset the streets were piled with corpses and wounded. Those who could make their escape fled in terror, and the city is now practically deserted of Jews (1) 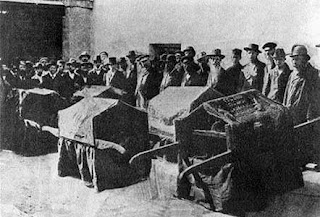 The riot described above took place in April of 1903, after a Christian Russian boy, Mikhail Rybachenko, was found murdered in the town of Dubossary, about 25 miles north of Kishinev. And although it would later be discovered that the boy had been murdered by a family member, who was found and convicted, the seeds of this massacre had already been laid.

Anti-Semitism was then rampant, but it accelerated with the 1903 publication of the Protocols of the Wise Men of Zion, in Znamya, a Black Hundreds newspaper owned by Pavel Krushevan.

The Protocols warned of a Jewish conspiracy to take over the world, providing oxygen to the hatred that already existed. Of course they were a fraud, concocted by Pyotr Ivanovich Rachkovsky, head of the secret police in Russia; who needed someone to blame for the unrest in Russia at the time.

They were re-published in 1905, resulting in yet another pogrom in Kishinev.

By now many of the residents knew that they were no longer safe in their homeland, and a mass migration (dispersion) took place. One group, on their way to Australia, found refuge in the home of a kind merchant in Kirchhain, Prussia. (2)

And as they relayed their stories of horror, a small boy listened intently, and realized for the first time, what it meant to be Jewish, and began to wonder if the same horrible thing could ever take place in Germany. (3)

His name was Leo Strauss and one day he would get to find out.

Leo Strauss was born on September 20, 1899 in the small town of Kirchhain, Kurhessen, Prussia, son of Hugo Strauss and Jenny David. His family had lived in the area since the mid 19th century, and were fairly well established by the time of Leo's birth. And despite the fact that Kirchhain is situated in the rural lands surrounding the 'enlightened' Marburg University, they remained traditional and conservative.

Leo's grandfather, Meyer Strauss (1835-1920) had established a wholesale grain, feed, and wool business with his sons Hugo and David. He was a leading representative of the Kirchhain Jewish community for half a century, and he and his sons regularly contributed funds to the synagogue in Kirchhain and served as representatives of the Jewish community's business and social inter­ests. (2)

According to Strauss they were heavy on Jewish ritual but light on any understanding of what it all meant.

The political climate of the area was not friendly toward this Jewish community, and in fact Marlburg was the first electoral district to embrace a politician whose entire campaign was based on anti-Semitism.

Otto Bockel (1859-1923) was a librarian who had studied law at the University of Marburg, but dropped out to become a folklorist. In his search for songs and stories amongst the German peasantry he began to blame their situation on the Jews and the wealthy landowners.

In 1887 he published a pamphlet, that not only attacked the Jews for their perceived dominance over German life, but was anti-clerical and anti-capitalist.

When he decided to run for office it was on an anti-Semitic, anti-landowner platform. Using pomp and ceremony, mass meetings, festivals, torch-light rallies, songfests and clever slogans, there wasn't a German peasant in the area who wasn't drawn in, and even those 'enlightened' students from the university, came out to protest their plight.

Referred to by many as the next "Luther", he offered insurance policies, free legal advise and promised "free-Jew" markets. (4)

And the Strauss family was not immune to the prejudice. In the midst of a drought in the 1890s, there was a lot of protest over the fact that the Strauss grain company was the choice of most struggling smallholders in need of fod­der. So in 1903, a granary was established in Kirchhain as an alternative to Strauss and Sons, which must have had an impact.

However, this mustn't have registered with Leo because later he would suggest that the Kurhessen Jewry lived in "profound peace" with non-Jewish neighbors, though he claimed that the government was "perhaps not in every respect admirable."

Maybe he was just too young to member or his family shielded him from the unpleasantness.

However, the tactic of policitical anti-Semitism was so successful that it inspired others to adopt what was often called the "Socialism of fools", including Karl Lueger, the mayor of Vienna, who had Adolfus Hitler standing on street corners bellowing Otto Bockel style slogans.

3. Why We Remain Jews," Lecture delivered by Strauss at the Hillel House, University of Chicago, 1962