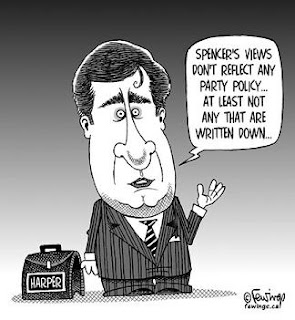 In November 2003, when Harper's Canadian Alliance Party was in the midst of trying to merge with the Progressive Conservatives, a controversy took place that could have potentially destroyed his plans. His MP for Regina-Lumsden-Lake Centre, Larry Spencer; made headlines with an interview he gave, via e-mail, to Vancouver Sun reporter Peter O'Neil.

Spencer, a Baptist Minister, spoke of a gay movement, and stated that it was a "well-orchestrated conspiracy that included seducing and recruiting young boys in playgrounds and locker rooms, and deliberately infiltrating North America's schools (as teachers), judiciaries, entertainment industries, and religious communities..." He also stated that it would lead to polygamy and pedophilia and that he would support any bill to criminalize homosexuality.

Needless to say, Harper was infuriated. According to Spencer in a book he published in 2006; entitled "Sacrificed? Truth or Politics", he was called into a meeting with Harper, Harper's Chief of Staff, and Opposition house leader, John Reynolds; on the morning his comments made the news. Spencer stated that Harper was glowing bright red, and quotes him as saying: "Who put you up to this? Do you know this could stop the unity vote coming up? You knew we wanted to run on the preservation of the traditional definition of marriage in the next election, now we can't do that."

Spencer was immediately placed under a "gag order", stripped of his "family affairs critic" job and temporarily removed himself from caucus. Spencer said "I retracted the statement I made indicating I would support a bill to criminalize homosexuality" but he made no retraction of his claims about a gay conspiracy.

When an election was called the following year, Spencer was astounded when he was told he would not be allowed to run for the new Conservative Reform Alliance Party; but instead was being replaced by Tom Lukiwski. And then this videotape surfaced:

In an attempt to deflect attention away from the other people on the tape, members of the scandal ridden Devine government, Lukiwski went public, sobbing, apologizing and promising to make it up to the gay community. He never did.

In fact, though the tape had been made seventeen years prior, his record on the issue speaks for itself:

Looking at Hansard for June 28th 2005; just prior to the vote on same-sex marriage, he made the following statement:

"I firmly believe that by passing this legislation, we start on a very slippery slope which could affect societal change in a very adverse way. I see things which have been expressed before that could come down the pike, things like polygamy and others, while hiding behind the Charter of Rights and Freedoms. I am fearful that societal change could happen.

"I also am a firm believer in the fundamental definition of marriage as we have known it all our lives. Marriage is and should continue to be between a man and a woman to the exclusion of all others. I was brought up in that environment and I will continue to believe that until the day I die."

"Until the day I die", sounds like a really long time; and hardly the words of a man now devoted to spending the rest of life making up for his 1991 'lapse of judgement.' Also when suggesting that same-sex marriage would provide a basis for legalizing polygamy (and other things, which he leaves vague) he sounds eerily similar to the Alliance candidate, Larry Spencer, whom he replaced.

In another long term goal of the Reform/Alliance Party, making abortion a crime, Lukiwski was designated anti-choice during the 2004 and 2006 elections; openly opposed the Order of Canada being given to Dr. Henry Morgentaler and voted for Bill C-484, (a re-worded initiative to outlaw abortion) at second reading. Lukiwski is clearly not sorry for his homophobic remarks, just sorry he got caught.

Ironically, Larry Spencer when asked how he felt about Lukiwski's remarks, stated:

“I didn’t think that it should have happened to me and I don’t think it should happen to him,” Spencer said in a phone interview Thursday. “We’re rapidly giving up our freedoms of our own opinion. We do it in the name of political correctness and that it might be offensive to someone. But have you ever stopped to realize that to me as a Christian how offensive it is to hear the foul language and the cursing and the swearing that you hear every day in the workplace and the attacks that I hear and see and read of people attacking Christianity and the Christian faith?” (1)

Clearly he hadn't listened to the entire tape or read the transcripts, or he would have seen and heard a lot of cursing and swearing. You can find both here, and I counted the "F" word 14 times.

1. Larry Spencer offers words of advice for Lukiwski: After Larry Spencer was turfed from the Canadian Alliance Party for making controversial remarks about homosexuals in 2003, Conservative candidate Tom Lukiwski criticized Spencer and approved the revoking of his party membership, By Leader-Post, April 3, 2008
Posted by Emily Dee at 8:25 AM