Chapter Thirty-One Continued: Ernest Manning and the Stain of the Japanese Question 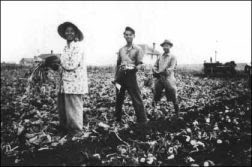 During World War II Japanese-Canadians were uprooted by the Canadian government and forced into internment camps, losing their homes and businesses, and many of those internment camps were located in southern Alberta.

Prior to this, according to a study by the University of Calgary in 1997:

Most Euro-Canadian Albertans regarded Japanese settlers, like Black Americans and Chinese immigrants, as racially inferior and unassimilable. However, unlike their Black and Chinese counterparts – and unlike Japanese residents in neighbouring British Columbia – Alberta's Japanese population generated little nativist attention during the late nineteenth and early twentieth century ... Historian Howard Palmer has argued convincingly that the reason for this general acceptance is that their settlement patterns and their small numbers made Japanese residents virtually invisible to Alberta's mainstream populace. A plan developed in 1908 to establish a sizeable Japanese farm community on irrigated land owned by the CPR east of Calgary did not come to fruition. The degree of public opposition the plan generated suggests that Albertans' underlying attitudes of prejudice differed little from the nativist sentiments that flourished in British Columbia. (1)

This doesn't make Alberta unique for the time but establishes a climate.

On the federal front , the twenty-eight CCF Members of Parliament, continue to protest the treatment of Japanese-Canadians, but behind the scenes, many faith based groups also became active in advocating for humane treatment.

One of these groups was the Toronto-based Co-operative Committee on Japanese Canadians, which had evolved from a Young Women's Christian Association project set up in 1943 to assist with the resettlement of single Japanese Canadian women. With the help of several churches, they lobbied against internment and pushed for resettlement and assimilation, across the country.

One might now argue that assimilation was a form of racism, but at the time, their motives were humanitarian, not a form of bigotry. According to Ann Gomer Sunahara, in her book The Politics of Racism:

Only in Alberta did resettlement become an issue. A province, like British Columbia, with a strong nativist tradition, Alberta alone had demanded in 1942 that the B.C. Japanese be removed after armistice. Identifying the B.C. Japanese as unassimilable enemy aliens, Alberta nativists began pressuring the Social Credit premier, Ernest Manning, to hold the federal government to its original agreement. The solution to the Japanese problem, the nativists felt, was to deport all Japanese Canadians. Premier Manning largely concurred.

A fundamentalist minister, Manning believed that Japanese Canadians were loyal to Japan, with that loyalty cemented by religious beliefs. "In the majority of cases," he told pro-dispersal Protestant church groups in 1945, the Japanese' first allegiance, due primarily to their religious traditions, is to the Emperor of Japan, to whom they regard their tie as spiritual. It seems to me that as long as these people embrace this philosophy… we must recognize that their first allegiance in an hour of crisis is to the Emperor of Japan rather than to the land adopted by them or by their parents…. I do not feel that they can be regarded in the same light as citizens whose tie to their homeland was an allegiance of a similar character to that which they now have to Canada as their home.

Manning's personal views were reinforced by political pressure from labour and civic groups and other Social Credit politicians. Both the Union of Alberta Municipalities and the Alberta Federation of Labour believed the anti-Japanese propaganda from B.C. and feared that Japanese Canadians would undermine labour relations in the province. Solon Low, M.P. for Peace River and national leader of the Social Credit party, believed Japanese Canadians should be deported "for their own good." Paternalistically he concluded that as an unassimilable minority they would never be accepted in Canada and therefore never be truly happy. It would be best, he argued, to deport them.

As the leader of a party that had been blatantly anti-Semitic in the 1930s, it was not surprising that Low also espoused the same anti-Japanese views as his colleagues from British Columbia.

Opposing the Alberta nativists were the churches and the press. The former condemned Manning's position as "unjust and un-Christian," urging that "it is our duty as Christians to win their first loyalty to Christ through Christian treatment." The Alberta press argued that "if we had the slightest conscience at all we would release them from bondage, restore their full civic rights and recompense them for the economic loss they have suffered."

In the end economic considerations decided the fate of the B.C. Japanese in Alberta. The Japanese beet workers, who had already been credited with saving the sugar beet industry during the Second World War, were virtually the only source of beet labour in 1946. The German and Italian prisoners-of-war, who had supplied a good portion of the labour in the 1945 season, were being repatriated to Europe, while displaced persons from Europe had not yet begun to arrive. Anxious to retain their reliable Japanese labour, the southern Alberta sugar interests began exerting pressure on Manning to keep the Japanese in Alberta.

In March 1946, they learned that Manning sympathized with their problem. He recognized the futility of opposing dispersal, whatever his personal feelings, if the other provinces accepted that policy. Alberta would take its quota of Japanese, Manning informed the sugar interests privately, if and only if British Columbia also did its part. However, in view of how controversial the issue was in the southern Alberta heartland of Social Credit support, Manning refused to take a public stand favouring Japanese Canadians. He preferred to procrastinate until the issue died a natural death.

While Manning's procrastination was good enough for the growers, it undermined the confidence of some of the B.C. Japanese in Alberta. Anxious for the security of permanent residence, a number of the uprooted Japanese took advantage of the resettlement program to move to the fruit and vegetable districts of southwestern Ontario.

This is why fundamentalism is so wrong in politics, because there is no compromise. And when fundamentalism meets big business, it creates a very destructive force indeed, as we are seeing today.

2. The Politics of Racism: A comprehensive history of the internment of Japanese Canadians during the Second World War, by Ann Gomer Sunahara, PDF, 2000
Posted by Emily Dee at 3:54 AM