Are Hate Groups Now Legitimized as Part of the Right Wing Revolution? 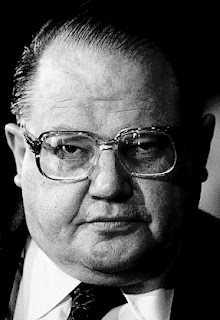 Nelson Bunker Hunt and his brother, William Herbert Hunt, are from a family of billionaires who have seen their fortunes rise and fall. In the 1980's they were charged with irregularities in trading, after cornering the market on silver, and were fined $10 million each and banned from trading in the American commodity markets. (1)

At the time they were forced into a chapter 11 and had to liquidate many of their assets. But once a billionaire, I guess always a billionaire and Nelson Bunker Hunt is once again riding high in the Republican/Neoconservative/Religious Right Movement.

But there are two other groups in particular, that he lends his name to, that are very important to the future of the Right-Wing Revolution: The John Birch Society and the Council for National Policy.

The Reform Party of Canada adopted a motion at it's inception, to allow right-wing fringe groups to join them. "In short the party leadership was trying to broaden it's right-wing support while not entirely surrendering it's attraction to fringe elements, at least some of whom were present at the Winnipeg Convention." (2)

While the John Birch Society itself did not appear to be much of a major force in Canada, it was part of the "fringe elements" that became associated with Canada's neoconservative movement. Paul Fromm was there in the early days, selling memberships to his anti-immigration group: C-Far*, that is still going strong. He was allowed to set up shop after arranging to have Peter Brimelow speak. Brimelow, now calling himself a paleoconservatist (white supremacist), made such an impression on Stephen Harper that he went out and bought ten copies of his book, The Patriot Game, and gave them to friends. (3)

Fromm has been a lifelong neo-Nazi, fired from his job as a teacher after a video surfaced of him at a Hitler birthday party celebration, giving the Nazi salute to a Confederate flag. He also attended a "Revilo P. Oliver Memorial Symposium" in November of 1994, which was organized by the National Alliance, a large U.S. Nazi propaganda organization, whose leader William L. Pearce was the author of the horrible Turner Diaries, which are said to have inspired the Oklahoma bombing by Tim McVeigh. The ad for the symposium read:

Dr. Revilo P. Oliver was one of this centuries greatest thinkers and writers . . . he was one of the very few academicians to fully perceive the threats to America and to western man. He was one of the founders of the John Birch Society when he realized that conservatism was a lost cause in America, he appealed to Americans to make a final and uncompromising stand for survival of America's founding race, a cause he championed until his death ... These speakers are speaking from the heart and speaking of the greatest issue -the survival of the European race - of this or any other century. (4)

The John Birch Society (JBS) is a conservative U.S. organization that was founded in California in 1958 to fight the threat of Communism. It represents itself as "a membership-based organization dedicated to restoring and preserving freedom under the United States Constitution." It states that its members come from all walks of life and are active throughout the 50 states as part of local chapters. The Society invites all Americans to explore its website, learn more about the John Birch Society, and consider joining with in its mission to achieve "Less Government, More Responsibility, and - With God's Help - a Better World. JBS advocates the abolition of income tax, and the repeal of civil rights legislation.

And this differs from the Reform-Alliance-Conservative platform, how? Harper's National Citizens Coalition had the motto "More freedom, through less government", a motto shared with his Northern Foundation. Sounds a little Birch-ist to me.

And today that same John Birch Society is now headed by Nelson Bunker Hunt and they are a co-sponsor of the Conservative Political Action Conference. This doesn't mean that they are no longer considered to be far-right, but far-right groups have now found a home in the Republican and Conservative parties.

The group that called Eisenhower a communist (5) is now a financial backer of the Republican Party. How did this happen? Nelson Bunker Hunt and the Council for National Policy.

In 1997 Stephen Harper, then President of the National Citizens Coalition, was asked to speak at the CNP Conference in Montreal. Most people at the time had never heard of this secretive group, and it was not without reason. The less that was known, the easier it was for them to operate. So who are they? The conduit between the Religious Right, the Republican Party and right-wing extremist groups. And they set their sights on Canada several years ago, finding allegiance with the Reform-Conservative-Alliance movement.

The relationship between the Republican Party and the Religious Right started in earnest in 1981 with the creation of the powerful insider club known as the Council for National Policy (CNP). Excited by Reagan's election, Tim LaHaye of the Left Behind series, Paul Weyrich*** of the Free Congress Foundation, Richard Viguerie, a wealthy Republican fundraiser, and other far-right conservatives decided to bring together the religious right, the small government/anti-tax right, and several extremely wealthy, like-minded businessmen such as Joseph Coors (whose company recently bought Molson) and Herbert and Nelson Bunker Hunt, rabid anti-Communists affiliated with the John Birch Society.

Their mandate was to influence White House policy and elect far-right and social conservative candidates to office. They initiated the Moral Majority Coalition and recruited Jerry Falwell to run it (Tim LaHaye recently gave US$4-5 million to Falwell for his Liberty University) and later welcomed other religious leaders such as Focus on the Family's James Dobson**** and the current "small government" crowd like Grover Norquist of Americans for Tax Reform. (In later years, the CNP reached out to the foreign-policy neo-conservative crowd as well. The organization has hosted speeches recently by UN ambassador John Bolton, Defense Secretary Donald Rumsfeld, and both Vice President Cheney and President Bush.)

The relationship between the evangelical right and the Republican Party started by the Council for National Policy has not wavered since it was established more than twenty-five years ago. Joan Bokaer, a professor at the Center for Religion, Ethics, and Social Policy at Cornell University, has studied the fundamentalist movement in the United States. Working through fundamentalist Pentecostal and charismatic churches, she reports, the Christian Coalition has promoted right-wing Republican candidates by mailing voters' guides to their constituents — telling them how to vote. Seventy million guides were sent out in the 2000 election alone. Reverend Rick Scarborough, an evangelical Baptist from Texas, has used his pulpit and his organization, Vision America, to help elect conservative politicians and judges for more, than a decade. Vision America has recruited and trained close to four thousand "patriot pastors" ... (6)

And the Council for National Policy confirms Hunt's involvement with this bio:

CNP vice president, 1982-1983; President Executive Committee 1983-1984; CNP Executive Committee 1988, member 1998; Heir of the Hunt Oil Company fortune and financial backer of CNP, CBN, JBS & Promise Keepers** and many more. Chairman Executive Committee 1984 and 1986 World Board of Directors of Here's Life, Campus Crusade for Christ; board member of John Birch Society; Western Goals Foundation principal ... funded Bill Bright's Campus Crusade for Christ donating $15.5 million. In 1967, formed Christian World Liberation Front (CWLF) as a covert front for Campus Crusade, which split off and became a leading ministry in the Jesus People movement ... He once organized a paramilitary force called "Americans Volunteer Group" which he intended to use--death squad style-- against political opponents. Hunt, whose Birch Society background is documented by Conway and Siegelman in Holy Terror, also made a contribution of $1 million to the Moral Majority in 1981 ... Donated $10 million to Pat Robertson's Christian Broadcasters Network in 1970.

Nelson Bunker Hunt is said to have partially underwritten the cost of an anti-Kennedy newspaper advertisement that appeared in the Dallas Morning News the day of the assassination. Hunt's oil profits were said to be threatened by Kennedy's announced plans to end the oil depletion allowance. A note written by Lee Harvey Oswald addressed to "Mr. Hunt" has raised speculation as to whether it was intended for the oil tycoon ... (7)

Hunt has not only been legitimized, but is a key player in both the Republican Party and the Religious Right. And the same group are now entrenched in our government.

*If you scroll down on this C-Far page, about half way is a photo of professor Kenneth Hillborn. He was also an early Reform Party influence and is now one of the financial backers of the Canadian Constitution Foundation, who take on constitutional challenges, mostly against Canada's Health Care.

**Harper backbencher, David Sweet, was the Canadian founder of the male dominated Promise Keepers. They have been described as a cult.

***Paul Weyrich is a godfather of the Religious Right movement. Before the 2006 Canadian election he agreed to tell his people not to speak to Canadian journalists for fear that it might spook the Canadian public if they knew how connected Stephen Harper was with his movement.

****Harper's assistant chief of Staff, Darrel Reid, is the Canadian founder of Focus on the Family. Several of Harper's MPs belong, including Rob Anders and Maurice Vellacott. In 2005 Dobson ran ads on 130 Canadian radio stations against same-sex marriage to help Harper get elected. He was going to run on a traditional marriage platform.

4. FROM MARCHES TO MODEMS: A REPORT ON ORGANIZED HATE IN METRO TORONTO, By Bernie M. Farber, Canadian Jewish Congress, January 1997