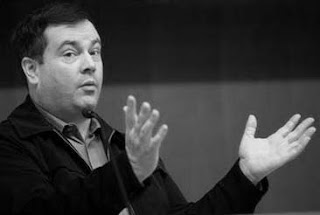 "Jesus talked about faith as the leaven that raises up the whole loaf; the light from the mountain that illuminates the valley below ... a treasure that one discovers through constant searching; a gift from a God who invites all especially the poor and sinners to a banquet of rich foods and fine wines. This is the faith to which we witness. Jesus, in our tradition, found this faith more deeply rooted in the hearts of sinners , prostitutes, tax collectors, and shepherds than in hearts of the religious and the self-righteous. He encouraged us not to separate wheat from chaff, but to take care of the fields entrusted to our care and leave judgments to God." Jesuit Fr. Stephen A. Privett

In 2000, Jason Kenney was invited to speak at his Alma Mater, the University of San Francisco, to a group of young Republicans. What he told them when asked about his success in persuading others to his side was: "I did not persuade them, the truth did. I used the political strategy I gained at USF when I campaigned for student government. I took the truth and I built a pluralistic coalition around it." (1)

The "truth" for him was the orthodoxy of the Catholic church. Normally when writing about a public figure you factor in all of their life experiences, that led them to who they were. But in the case of fundamentalists or those who follow an orthodox form of religion, there is only one place to draw from. And despite all of his life experiences, everything that now shapes Jason Kenney's thinking can be found at St. Ignatius in the mid to late 1980's. It was there that he found his "truth".

He has said on numerous occasions that he was "converted" while there, which I found a little puzzling. After all, Kenney's father was the president of a Catholic college, the same college that Jason graduated from. Was he not Catholic then?

However, what I've discovered is that his conversion may have actually been to the "church", the absolute "truth", as espoused by three controversial theologians: Rev. Joseph Fessio, the founder of the school; Cardinal Joseph Ratzinger, now Pope Benedict XVI, the influence for the school, and Fr. Cornelius M. Buckley, whose liturgies based on Catholic orthodoxy, were said to have inspired a "cult like" following.

In 1987, when Jason Kenney abruptly left his studies, both Fessio and Buckley had been fired from their positions at the university, not only for their refusal to conform to the modern teachings of the church, but because they were constantly locking horns with the Jesuit hierarchy, and encouraging their students to do the same.

One graduate from St. Ignatius puts it this way:

I began my undergraduate life in 1980 at University of San Francisco. While there, I witnessed a virtual war between orthodox Jesuits and Jesuits of a different stripe. Jesuits who I regarded as good and holy men, were silenced when they didn’t toe the Jesuit party line. Fr. Cornelius Buckley, S.J., a professor of history, was silenced and sent to work at a small hospital in Duarte, California, where he remained for many years, obedient to his order, even though many in his order are flagrantly disobedient.

The St. Ignatius Institute, under the guidance of Fr. Joseph Fessio, S.J., operated a classical Catholic curriculum within the larger confines of the university and it attracted many students ... It took the Jesuits over twenty years to shut the Institute down, which they finally did a few years ago by firing its director and hiring new professors who would teach the "new" theology. The Institute now exists in name only. It doesn’t teach the same things ... Both Fr. Fessio and Fr. Buckley are two orthodox priests, who when they objected to much of what was going on on campus, did not endear themselves to their fellow Jesuits. (2)

One of the things that they objected strenuously to, was the acceptance of homosexuality.

Our 'Greatest Canadian' Tommy Douglas, when studying to become a pastor, told a story of how a straight laced preacher had visited his home and how his mother was mortified, when his father offered the teetotaller a beer. He decided on that day that if he was going to be a minister, he would be "one who would accept a glass of beer at a parishioner's home, who would accept his parishioners as he found them and would strive to be one of them." (3)

In the testimonial of the St. Ignatius graduate above, he states that "It took the Jesuits over twenty years to shut the Institute down, which they finally did a few years ago by firing its director and hiring new professors who would teach the "new" theology." This purge was accomplished by Fr. Stephen A. Privett, who in the opening quote says that "Jesus, in our tradition, found this faith more deeply rooted in the hearts of sinners , prostitutes, tax collectors, and shepherds than in hearts of the religious and the self-righteous. He encouraged us not to separate wheat from chaff, but to take care of the fields entrusted to our care and leave judgments to God." (4)

Privett understood what Douglas understood. You take care of what was entrusted to you and leave the judgements to God. By sharing a glass of beer or reaching out to the gay community, even if you personally disapproved of such things, you reached the hearts of "sinners".

Since Marci McDonald's The Armageddon Factor* hit the shelves, there are many defending the enormous power of the Religious Right on the Harper government, by stating that Tommy Douglas also promoted what have been referred to as "Christian values". But there is a vast difference.

Several years ago, in an interview, Douglas was asked: It has been suggested that you emphasize religion in politics in the manner of Aberhart and Manning. As I recall, you set yourself firmly against doing this, did you not? To which he responded:

"Yes. I've always been strongly opposed to using religion as a gimmick for gaining political support. I believe in applying Christian principles to politics and to government. But I think one must remember that in a political party there are people of all religious beliefs, just as in every church there are people of different political points of view." (5)

He often spoke out against William Aberhart and Ernest Manning using their radio Bible shows to promote their political agenda, and I think he would be quite troubled to see what is happening in our country today.

Because this movement does not reach out to "sinners", but passes judgement, something that should be left to their god.

I'm not a religious person, but I'm not an atheist either. I believe that everyone has a right to their own beliefs, so long as they don't try to "force" them on others. And I don't think that homosexuality is a "sin", or that you need to be a Christian to have "values".

When Jason Kenney excluded gay rights from our citizenship guide, it was not an oversight. It was part of his "pluralistic coalition": that he had built around his "truth".

When he was attending St. Ignatius, "... he made headlines in California trying to ban abortion groups from the university and fighting against gay rights in San Francisco." (6) In fact, "Jason was a leader of a group of students that sued USF for false representation. USF claimed to be Catholic yet failed to espouse the teachings of the Catholic Church. Kenney, who converted while at USF, was able to see the contradiction. USF began to fund campus organizations, which undermined the teachings of the Catholic Church." (1)

Jason Kenney went to enormous lengths to oppose abortion and homosexuality, even suing a university. He told the Western Catholic Reporter in 2003 that he felt that "Political activity is "a necessary form of charity in the promotion of the Gospel"." (6) Or more precisely from the Young Republicans:

Kenney was initially opposed to the life of politics, believing that morality and politics are mutually exclusive. His life was changed when he read the Holy Father's encyclical, Evangelicum Vitae. Seeing that the Holy Father's notion of politics was a form of charity changed Kenney's perspective. "I felt compelled to enter politics as a vocation. I was called to politics, not qua politics, but as a form of charity as a promotion of the message of the Gospel of life". (1)

Our political leaders are not there to fulfil a "vocation" of spreading the Gospel, and we are not a "charity". The majority of Canadians are very accepting of the people that Kenney deems to be "sinners", and if he's not, then he clearly needs to find a new "vocation."

4. Response by Stephen A. Privett, S.J., President of the University of San Francisco, to the charges made on the website of Friends of the St. Ignatius Institute, February 8, 2001