How Focus on the Family is Destroying Children 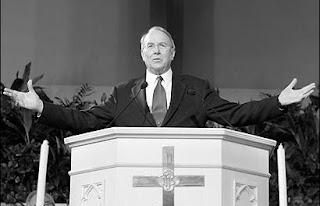 James Dobson is the founder of Focus on the The Family, and one of the leading members of the Religious Right. He not only spent thousands of dollars campaigning for Stephen Harper's fight against equal marriage, but he provided four and a half million dollars to start a Focus on the Family in Canada.

Harper's assistant chief of staff, Darrel Reid founded the group, and several of Harper's MPs, including Maurice Vellacott, Rob Anders and Brad Trost, belong to it.

Brian Elroy McKinley, a former Christian, has launched a website, that not only exposes FOTF, but also acts as a support group for others who have been damaged because of Dobson. He doesn't feel that Focus are alone but speaks of how "... the illness of judgementalism, and prejudgementalism has infected the ranks of the faithful." (1) This should help to serve as their wake up call.

For fourteen years I attended church three times a week with my parents. This particular church seemed to have a very intimate relationship with Focus on the Family. I was taught women didn't deserve the same respect as men because they were not equal to them. This and other "values" were ingrained into my young, absorbent mind from the nursery to youth group. As a female, this contributed to my low self-esteem. My self esteem, in turn, led to my silence after my rape (my youth pastor convinced me it was my fault and that I was "ruined") and a relationship with an abusive boyfriend. My experiences drove me to reject Christianity as a whole. I would like to give my life back to Christ, but I can't let go of my haunting memories. I also can't separate Christianity'steachings from those of Dr. Dobson. (2)

I was raised as a child by the Dobson's methods. I went to a Christian School whose idea of sexual education was to put on a Dobson tape and tell us to take notes. I was given "tough love" because my parents were confused with certain aspects of my personality that Dobson claimed was "passive rebellion". Ergo, I was given "spankings" (the details of which I will spare you, but I understand that not even Prisoners of War, according to the Geneva Convention, should be treated in such ways). It was all done by the book (Dobson's books) and his radio shows were always on the radio.

Three nervous breakdowns, years of therapy and support groups, and a lost childhood later, I am just starting to learn what Mr. Dobson's theories have done to me. Despite this, millions continue to listen and adhere to his destructive approach to parenting. For years, I thought I was alone in this opinion. My parents and I have made our peace over the past. But, it churns my stomach to know he carries on. (2)

I am a gay man. Many years ago, I listened to Focus on the Family. They had a news show called 'Family News in Focus.' It was the only thing that I found that addressed homosexuality..albeit in a negative light. Their radio program really worked on me. I nearly killed myself before finally accepting myself as I am. A friend of mine was less fortunate and became obsessed with Bob Larson's 'Talk Back' program and later committed suicide.

After this happened, I started researching the Religious Right and found them out to be a very scary bunch. Bob Larson has a fan club these days. But, as you are seeing, it's hard to criticize them, because then you're the 'enemy' who is 'attacking' Christianity. It's a catch-22, and I know that it's not Christianity that you wish to attack! I have come across some 'Christian' sites and have sent letters to their editors when they come across so extreme, trying to get them to consider what they are saying. But I only get a bible verse back, and a polite letter that doesn't address what I said to them at all.

"Love the sinner but not the sin" is what I'm told. I asked one of them why don't they think that it's a sin using homosexuals in fundraising letters in order to stir up anger toward us (to get 'love gifts' from their followers)?

I'm hoping that one day being a Conservative Christian means things other than attacking homosexuals, focusing on abortion and prayer in schools. (2)

Groups like Focus marginalize anyone who doesn't fit into their narrow little definition of what a person or a family should be. And they have an almost cult like following.

Susan Greene, a columnist for the Denver Post discovered just how much of a cult following Dobson had, when she wrote criticizing his endorsement of spanking children.

Having been called all sorts of names as a columnist, I've got to hand it to some members of the religious right for their spirited invective. A column I wrote over the weekend criticizing James Dobson for his advocacy of corporal punishment prompted one reader to call me a "Jezebel," another a "dyke." Five men and two women have lobbed the c-word my way. And I have been called a "retard" three times and a "moron" twice since Sunday.

All purportedly in defense of Dr. Dobson and the moral righteousness of his teachings. Several readers took umbrage with my use of the verb "hit" as a synonym for "spank" — as if spanking were more virtuous, see, because it is focused on the family.

...Reader Charlie Haynes called to tout how effective he found it to have bitten his troubled young daughter and hit her head on the ground. Scott from Castle Rock phoned to threaten me with a spanking (with me wearing bobby socks, as he bothered to imagine it). No joke. Walter Smetana decried my criticism of Dobson as illustrative of a "mindless, bestial, even Satanic banality of evil."

...And Walt Morrison sent his warmest and fuzziest anti-Semitic regards, using the debate about discipline to launch into a hateful rant about the need to exterminate Jews. Way to spread the love, Mr. M!

What touches me, I mean really touches me, are all the good folks who have called to say they're praying for me and my hatefulness. That's code for insinuating that I'm headed for damnation because I don't spank my kids and am dubious when readers claim their own grown children have thanked them for whacking them.

"My daddy belted me. I belted my son. And God willing, my son will discipline his own boy," Paul White, a reader and self-described amateur pastor, phoned to tell me Monday morning. "It's called backbone. It's called firmness," he continued. Maybe, Mr. White. But it's also called abuse and repetition compulsion and being a big old bullying blow-hard, plain and simple. Now put your belt back on. (3)

Yes, it also churns my stomach to know that there are people out there like this.

1. A More Honest Form of Faith, A Former Christian's Perspective, By Brian McKinley

2. People directly damaged by Focus and the people who follow them, Letters of Support