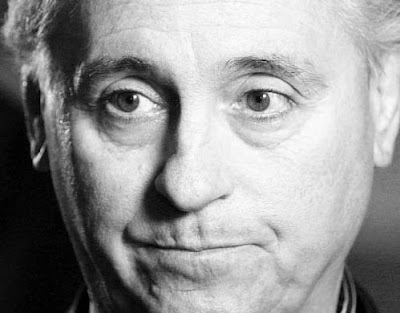 "I've always been strongly opposed to using religion as a gimmick for gaining political support. I believe in applying Christian principles to politics and to government. But I think one must remember that in a political party there are people of all religious beliefs, just as in every church there are people of different political points of view." Tommy Douglas (1)

Though it is believed that Ralph Klein and Mike Harris led the first neoconservative governments in Canada, Grant Devine in Saskatchewan came before them. I suspect the reason they don't advertise that fact is because of the scandal that has come to define those years. And for many of those years, the executive director for the party was Tom Lukiwski, now in the Harper government. When the old tape, where he is making disparaging remarks about homosexuals came to light, it became about his remarks, instead of the people seen on the video with him, including two who ended up in jail.

However, Grant Devine was also one of the first to bring the American religious right movement to Canada, tapping into religious fervour as a "gimmick" for political gain. Not that he didn't have fundamentalist views. I believe he did. However, rather than in the case of Tommy Douglas, who gave the province and the country so much, Devine was only interested in taking away. 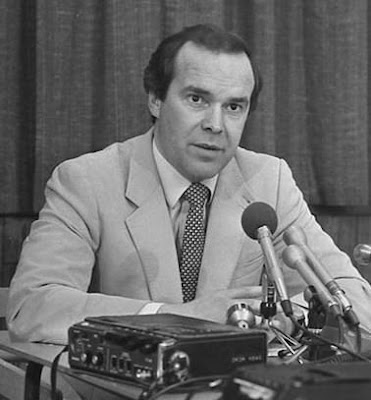 Though traditional Canadian conservatism represented social democracy and a strong sense of community, Grant Devine embraced a conservatism that more closely represented the neoconservatism of Ronald Reagan and Margaret Thatcher.

But with it were elements of American style conservatism that stressed individual responsibilities and an established moral code.

The new right in Saskatchewan has broken with tradition and accepted the superiority of the market over democratic government. In most respects, it borrows its ideas from American and British neo-conservatives. Devine's outspoken moralizing and promotion of family values have an affinity with Jerry Falwell, Pat Robertson and the Moral Majority. His admiration of the American economic system, his eager endorsement of free trade with the United States, his tendency to adopt the style of an American governor, and his disdain for the traditions of parliamentary government all testify to the strength of the American influence. (2)

Everything that Tommy Douglas had accomplished had to be abolished if neoconservatism had a chance. Ironically, while Tommy Douglas was recently named the Greatest Canadian, voted on by Canadians, everyone associated with this movement hated him. Ernest Manning called him a communist. The National Citizens Coalition*, which was founded on the advice of Ernest Manning, was formed to fight against his Medicare, and Stockwell Days' father ran against him, also calling Douglas a communist, and a threat to our country.

Maybe that should tell us something.

But unlike Tommy Douglas, Devine had no notions of taking care of the people of Saskatchewan. Like Stephen Harper, he embraced the teachings of Friedrick Von Hayek and Morton Friedman, Ronald Reagan's financial guru:

Both Hayek and Friedman had been saying for a long time that government activity should be cut to a bare minimum and that the market should rule ... It became fashionable to talk about the theory of incentives and to deplore government assistance for the poor. It was good for people to be poor; being poor made them work hard to lift themselves out of poverty. It was good for people to be rich; the existence of rich people encouraged others to think that if they took risks, were innovative and worked hard, they too could be rich and not have to worry about the government taking the fruits of their entrepreneurship away from them. A less secure social safety net would sharpen the survival instincts of a citizenry too long pampered by affluence and welfare. According to the neoconservatives, government interference in the economy was a kind of sickness; the free market was hailed as a miracle worker. (3)

This was not unlike Ernest Manning's philosophy: "Giving to the individual societal benefits such as free medical care ... breeds idleness... causing a break down in his relationship with God ... where the state imposed a monopoly on a service ... the sinful philosophy of state collectivism scored a victory." (4)

Grant Devine and the Religious Right

Along with the economic principles of the American neoconservative movement, Devine also brought along the religious crusade of the Moral Majority, or Christian Right. He campaigned on a platform of "family values", using the slogan "God first, family second, the Conservative party third, borrowed from Mary Kay Cosmetics, which his wife sold: "God first, family second, and business third". Devine believed that politicians had both a right and a responsibility to provide moral guidance: "I think one of the biggest challenges we face in this country and North America is one of morals."

Adding to the fury of the neo-conservative attack on the welfare state is an alliance forged with the new Christian right, which has become a force to be reckoned with in American politics. The Christian right claims to have Biblical sanction for free market economics, and prescribes moral solutions for the problems afflicting society. Poverty, unemployment, family breakdown, crime, drug addiction, pornography, sexual permissiveness would all end if people were "born again." Because the new Christian right is profoundly anti-government, it is compatible with secular neo-conservatism. Government social programs and anti-poverty campaigns are judged to be useless because all social problems are simply questions of individual morality. Indeed, the welfare state is worse than useless because it takes the onus off individuals and families. The family teaches children individual self-worth and moral responsibility, and prepares young people for the battle of life in a sternly competitive world. Socialism and feminism are the twin enemies of the family, one because it allegedly robs families of their rightful role, the other because it takes mothers out of the home.

Although the Christian right is anti-government in that it opposes the welfare state, it heartily approves of some types of government activity. The power of the state can legitimately be used to curtail individual liberty as long as the purpose is the enforcement of Christian morality, as defined by the Bible and authoritatively interpreted by the new Christian right. Values such as tolerance, pluralism, and freedom of choice are rejected in the name of a higher morality, one that "would make America great again." For the Christian right, morality is not a private but a public matter. On these grounds, it campaigns for coercive state action on such issues as abortion, homosexuality, and school prayer. Neo-conservative economics merged with moral majority values to create a potent political movement. (5)

He also opposed abortion and homosexuality, and like Stephen Harper, took on board pro-life groups, including REAL women of Canada. 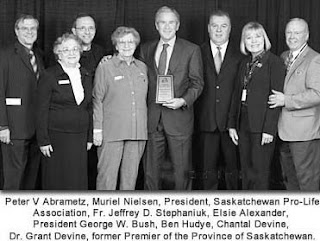 Though Tom Lukiwski's father was a union activist and lifetime NDP, his son would adopt neoconservatism, embracing the divisiveness and dirty politics that goes along with it.

* Stephen Harper was president of the NCC
Sources: