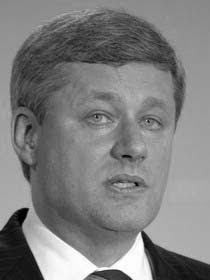 I was looking for a book on the shelf the other day and another came crashing down that I had forgotten about. Was it divine providence? Maybe.

It was Maude Barlow's Too Close For Comfort, published in 2005, before Stephen Harper came to power. I had read it shortly after it came out, and it had added to my concern with the direction this country would take, if Stephen Harper was ever successful in fooling people into voting for him.

After plonking me on the head, the book fell open to a section "Northward Christian Soldiers", so was it the left hand of God that threw the book at me, literally?

In it Barlow raises the alarm over the influence the American Religious Right could have under a Harper government. This was five years before Marci McDonald's explosive book, The Armageddon Factor, hit the shelves:

...the sometimes narrow convictions of Christian sects are being exploited by politicians in both Canada and the United States (where the tendency is highly developed) to introduce into the political realm a degree of inflexibility, passion, and rancour that tend to undermine the spirit of accommodation and tolerance that is essential to the functioning of a democratic society. Our civil liberties are threatened as a result. The point is that people are free to believe what they want privately, but if they enter politics to inflict those beliefs on others, then their religious concerns become fair game. (1)

But it wasn't the religious elements discussed by Barlow, but her predictions should Harper form a government, that caught my attention. We should probably call her a prophet because I went through her list and every single one has happened. Every single one.

The quote about multiculturalism being a "weak nation strategy" was from a speech he made to to the Institute for Research on Public Policy, in May of 2003. IRPP is another "non-partisan" think-tank that lists itself as a "charity". They are clearly not non-profit though, with assets of $31.5 million dollars. Aren't tax breaks for the wealthy grand?

To ensure that Canada is "never again" perceived as a potential source of threats, Harper called for a "long-overdue" reform of our refugee programs. (2)

Jason Kenney was a perfect choice to do that. Not only does he arrogantly refer to himself as the "minister of curry in a hurry", but when he was with the Canadian Taxpayers Federation, he campaigned hard against money going to multiculturalism. So while exploiting our immigrant communities, he's working overtime to keep out "undesirables", so as not to "weaken" our nation.

Maude Barlow - As leader of the Alliance, Harper called for active participation in George Bush's continental ballistic missile defence program and the massive "hard-power" buildup of Canada's military capacity. As Conservative Party leader, however, he vacillated on the issue when polls showed BMD to be unpopular, even with Conservative Party supporters, earning a stern rebuke from President Bush when he made his first visit to Canada. And now, the party has adopted resolutions in favour of BMD, in keeping with Stephen Harper's natural inclination. (1)

Reality - ... during a June 2007 G8 Summit of Nations in Germany, Liberal leader Stephanie Dion and New Democratic Party (NDP) leader Jack Layton accused Prime Minister Stephen Harper of “...quietly throwing his weight behind the US missile defence program...Harper has stepped up to defend US President George W. Bush and the missile-defence scheme in an ongoing showdown with Russian President Vladimir Putin.” Whether this was a simple coincidence or an overt act on the prime minister’s part is subject to conjecture. (2)

Maude Barlow - Stephen Harper promotes "continental economic and security integration" with the United States, which would pave the way for a customs union between the two countries. Under a Harper government, Canada would lose the right to set its own labour, environmental, and security standards. He proposes to negotiate international trade agreements in partnership with the very superpower whose corporations want to come to Canada and deliver our public services on a for-profit basis. (1)

Reality - Government ministers have avoided saying just how much the recent deal on Buy American preferences, whose implementation was announced at a quiet news conference in Vancouver this week, is worth to Canadian suppliers. As the details of the agreement emerge, the reasons for this evasiveness are now clear. ... In return for these meagre scraps, the provinces and municipalities have offered up temporary market access to U.S. suppliers worth an estimated $25 billion Canadian). More ominously, Canada has bowed to U.S. pressure to permanently bind purchasing by Canadian provincial governments under the WTO Agreement on Government Procurement. (3)

Maude Barlow - Stephen Harper has also called for a continental energy strategy that would be broadened to "a range of other natural resources." (This sounds like code for Canada's water.) (1)

Reality - Harper signed away our water rights but we had to learn about it from the Irish Parliament.

Maude Barlow - Stephen Harper supported American military aggression around the world. "The time has come to recognize that the U.S. will continue to exercise unprecedented power in a world where international rules are unreliable and where the security and advancing of the free democratic order still depend significantly on the possession and use of military might." (1)

The signing of this plan is an important symbol of the already strong working relationship between Canada Command and U.S. Northern Command,” Dumais said. “Our commands were created by our respective governments to respond to the defense and security challenges of the twenty-first century, and we both realize that these and other challenges are best met through cooperation between friends.” (4)

Smart lady that Maude Barlow. And this is just chapter one.

3. Canada gives away the store in return for scraps from U.S.: Deal will tie hands of provincial governments to use procurement as a public policy tool. By Scott Sinclair, Toronto Star, February 19, 2010