Ted Byfield and the Company of the Cross

In June of 2003, little more than a year after winning the leadership of the Alliance Party of Canada, Stephen Harper told members of the Civitas Society that he would now be embracing the support of the Christian right in Canada. Looking on with approval was long time mentor, and a founding member of the Reform Party, Ted Byfield.

He had been there in the early days when Harper was first cutting his political teeth and was in attendance when he delivered his "Achieving Economic Justice in Confederation" speech at the opening assembly of the Reform party on October 1, 1987.

In his presentation, Harper recited a litany of western grievances, from Macdonald's National Policy to 'the unlimited appetite of the Welfare State for tax grabs' and 'the special treatment accorded the Province of Quebec' in the form of transfer payments 'paid exclusively by Western Canada.' He then stated his reasons for believing that the existing political parties were incapable of correcting these injustices ... But Harper's comments regarding the Conservative party were the most telling, revealing implicitly where the new party believed its greatest potential support lay:

"... the Mulroney government has shown itself far too willing to back down on the issues that matter to its political base. We must serve notice to the Red Tory leadership that we will provide its Western supporters an option they can desert to en masse should they, for any reason, fail to successfully deliver on [free trade] or any other major initiative of importance to Western Canada. (1)

Manning would call his throwing down of the gauntlet speech the best of the weekend and Stephen Harper would then be named the head of Reform policy, and would serve as Manning's lieutenant. The same role that father Ernest Manning had played for William Aberhart, decades before.

Ted Byfeld had played an integral role in the formation of the party, through his Alberta Report magazine. He not only advertised their conventions and assemblies but before it's formation, he began running columns suggesting that it was time for a new Western party. The seed was planted and bore fruit on that fateful weekend in Winnipeg.

Things could have gone quite differently for Ted Byfield after a tragedy and controversy that continued to rage for several years after. It ended on a lake in Ontario but began several years before.
Company of the Cross and the St. John's Schools 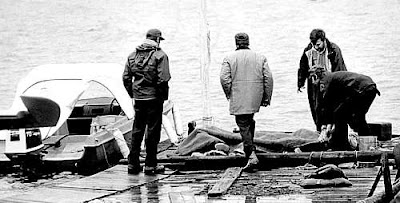 Ted Byfield was a journalist who began his career as a copy boy for the Washington Post. Returning to Canada in 1948, he wrote for the Ottawa Journal, the Timmins Daily Press and later the Winnipeg Free Press. In the 1950s, he underwent a religious conversion after reading books by C.S. Lewis and G. K. Chesterton.

Inspired, he joined the Anglican Church and working through them opened a private Christian school; Saint John's Cathedral Boys' School, and in 1962 left journalism to teach there full time. In 1968 he opened another near Edmonton and later a third in Ontario.

The schools were said to be cult like, run by a lay religious order, the Company of the Cross, who lived in a communal apartment building, and were paid a mere dollar a day. When Byfield started his magazine in 1973, he used the same group to create and deliver the publications, which regaled against things like homosexuality, abortion, the public education system, crime and prostitution.

The students at his schools didn't fare much better than the staff. They did all the janitorial work, cooking and serving food, cleaning the kennels of the sled dogs they raised, and even making and selling processed meat products door-to-door for fundraising (hopefully not from the sled dogs they raised). Byfield and co-founder of the schools, Frank Wiens, believed that boys were not challenged by the education system or by society in general, so pushed them to their breaking points to "build character", and if they didn't toe the line, they were dealt with a "flat stick across the seat of the pants."

In 1974 the National Film Board produced a glowing documentary about the schools:

St. John's Cathedral Boys' School, at Selkirk, Manitoba, is the most demanding outdoor school in North America, but it cannot accommodate all the students who would like to enroll. Boys of thirteen to fifteen begin with an initiation tougher than they have ever faced: paddling canoes through some five hundred kilometers of wilderness in two weeks, portaging and camping all the way, learning not only outdoor lore but cooperation and self-confidence as well.

But then in 1978 a gruelling canoe trip turned deadly for the Ontario campus. "The tragedy occurred after a group of 27 boys, aged between 10 and 15, and four instructors from St. John's School of Ontario, in Claremont, northeast of Toronto, began canoeing up Lake Timiskaming, about 370 kilometres northwest of Ottawa." Twelve boys between the ages of 12 and 14 and one instructor were drowned. (3)

There had been storm warnings earlier in the day that had either been ignored or missed.

James Raffan wrote a book about the tragedy, and took issue with the schools, that he stated were little more than sweatshops. He also expressed surprise with the attitudes of the parents and staff after the deaths. They seemed to be very defensive of the school's program, and unwilling to cast or share blame. (4)

However a law suit filed years later revealed the horrendous details of life at one of the schools.

A private Christian boys residential school near Edmonton, renowned for its tough discipline, has been sued by a former student for alleged physical and mental torture during and after a wilderness trip more than a quarter-century ago ... in the 14-page document he "was forcefully exposed to experiences on the trip that put his life, health and safety at risk."

The 10-day trip, which began on Sept. 2, 1976 -- the day after the then 13-year-old boy arrived at the school near Stony Plain, 30 kilometres west of Edmonton -- was comprised of a 100-kilometre hike through steep mountain passes and a 500-kilometre canoe trip through some of the most treacherous parts of the North Saskatchewan River.

"The plaintiff states that the defendant's putting his life at risk by forcing him as a 13-year-old boy, untrained, unprepared and unsuitable to participate in the dangerous and unsafe physical activities of the wilderness trip, such as the long and arduous canoe trip often through treacherous waters, as well as its other conduct and treatment of him, amounted to a callous and wanton disregard of his safety and well-being and of his civil rights and a betrayal of his trust," the claim alleges.

The claim says the school's staff picked on and encouraged other students to pick on the weak, subjecting Birkin to "public ridicule, contempt, humiliation, degradation and sadistic and verbal abuse." Birkin spent 10 days in Stony Plain Hospital following the trip, suffering from ulcers on his feet and legs and blistering on his thighs. According to hospital records, the claim says, when Birkin was admitted he had a large bruised area and linear marks on his buttocks which he told a doctor had come from being beaten with a stick to make him hike faster.

He claims that while he was on the canoe portion of the trip, when he was exhausted and unable to keep up with the five other student paddlers, he was
repeatedly struck in the lower back with a heavy wooden paddle. ... It is not the first major claim of negligence against Saint John's School, which has an enrolment of about 130 students and 30 staff and is located on 110 hectares of bush, park and farmland.

A 15-year-old boy, Matt Riddel, sued the school for $1.7 million in 1996 after he lost nine toes to frostbite on a winter camping trip. He sustained his injuries during a four-day, 50-kilometre snowshoe and dogsled expedition, under the supervision of the school's teachers, in which temperatures dropped to -28 C.

The schools are all closed now and his magazines defunct, but Byfield has moved on to other things. Besides being a founder of the Civitas Society, he also helped to found the Canadian Christian Coalition, based on the American counterpart, after attending a Washington Convention in 1995. Jason Kenney is also a founder of CCC and a founding member of Civitas.

6. The Christian Coalition Comes to Canada, by Kim Goldberg, The Albion Monitor, May 5, 1996