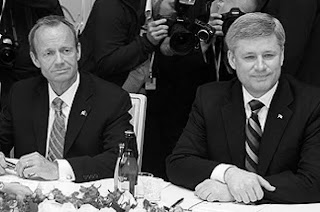 I think some of the best moments in politics over the past decade are the leadership races of the Reform, Alliance and now Conservative party.

The Reformers will complain about how the opposition paints them as racist, homophobic or religious fanatics, but frankly what they do to each other, defies anything the opposition could come up with.

The 2000 leadership campaign for the new Alliance Party became a holy war.

In early May, the Campaign Life Coalition's Website described a Tom Long win as a "disaster," identifying two prominent members of his inner circle as "self-proclaimed homosexuals. Long condemned the Coalition's comments, as did the other candidates ... Then, on 3 June, Families for Day similarly attacked Long's organization for employing homosexuals. Stung by the viciousness of Day's social conservative supporters, Long gave his support to Manning.

Meanwhile, behind the scenes, a game of hard ball politics was going on. Days before the final vote, MPs Deborah Grey and Eric Lowther accused Day's team of using threats and intimidation to win the nomination. They pointed particularly to a letter written by Dr. Ted Morton, a Day supporter and political scientist at the University of Calgary, sent to Lowther. In the letter, Morton urged Lowther not to criticize Day or to let himself be "used by Preston and his advisers as a tool for their surrogate negative attacks on Stock" as it would not be in his [Lowther's] interests: It's no secret that there are more than a few ex-Tories/now Alliance who want to take a run at you for the Calgary Centre nomination. If Stock wins—which he will—he (and Jason [Kenney]) will be in a position to protect you against a nomination challenge. Alliance MPs Diane Ablonczy, Peter Goldrick, Bob Mills , and others similarly suggested members of the Day camp had threatened them. MP Deborah Grey said she was "heartsick." (1)

And they were already exploiting religion for political gain:

All of the candidates in the race professed strong Christian beliefs, while both Manning and Day are devout evangelicals. There is no reason on the surface, therefore, to expect that evangelical or fundamentalist Christians should have supported Day any more vigorously than they did Manning. But Day cultivated this community's support more aggressively than Manning .... Within the religious community, Families for Day was no doubt his strongest supporter. Created by Ron Beyer (head of the Calgary-based Canadian Family Action Coalition) and Garry Rohr .. Families for Day organized an E-mail campaign to sign up new members. Beyer claimed the organization signed up at least 6,000 new party members who voted for Day on the first ballot—approximately the margin of Day's lead over Manning, if correct. (2)

This prompted Manning's team to refer to Stockwell Day's team as a "cult", comparing Day to Jim Jones.

So when a new leadership race took place in 2002, after Day's caucus mutinied, Canadians who follow politics braced themselves for another holy showdown. And this one got even uglier. As journalist Kevin Michael Grace set the stage:

One thing is for certain. This is going to be a dirty campaign--perhaps even nastier than in 2000, when the Tom Long campaign was accused of being a homosexual coven and Mr. Day was compared to mass murderer Jim Jones. And despite Mr. Harper's promise to avoid personal attacks--a promise made also by Mr. Day--it was his campaign that drew first blood. (3)

The "first blood" was a dismissal of Day's announcement that he would be running again, having learned a lesson. Harper's campaign spokesperson, John Collison called his launch a "non-event," and said that he had "pretty much worn out his media welcome" and "Stock Day...is not the deepest policy thinker."

He apparently had underestimated his opponent and the fact that he had a past that could be used against him. Collison was a former radio shock jock, who had been fired from his job at a Winnipeg radio station for his relentless attacks on two gay politicians. He referred to it as a freedom of speech issue, and indeed the CRTC had repeatedly warned him (4) about his anti-gay rhetoric. But I think it was more of libelous situation, and one of his victims did sue and was awarded a cash settlement.

So far as shock jocks go, the fact that they call themselves "shock jocks", means that we can expect the outrageous, so I don't think they should really be censored. Personal attacks are something else.

However, Day used this opportunity to paint Stephen Harper as homophobic.

At this point, the Collison affair becomes murky and somewhat bizarre .... a profile of Mr. Collison by Peter O'Neil appeared in the Vancouver Sun ... "Ex-shock jock an aide to Alliance leadership hopeful: former radio host was fired after being accused of abusive treatment toward gays." ... Although Stockwell Day spokesman Eric Duhaime denies it explicitly (as does Mr. O'Neil), it is widely supposed that a Day supporter fed the Collison material to the Sun. It is also widely believed that Day supporters forced Mr. Harper to accept Mr. Collison's resignation after they indicated that unless he did, Mr. Day would not guarantee to support Mr. Harper if the latter won the leadership contest. It is further widely believed that Day supporters boasted that they had exposed Mr. Harper for harbouring a homophobe." (3)

This prompted Harper supporter, Lorne Gunter to remind us that it was Day supporters that had outed Tom Long staffers as homosexual. Also that "Some of the leaders of those pro-family groups are now working for the Day campaign, and one of Day's senior strategists is a gay libertarian from Quebec, yet there is not a peep from these former family lobbyists."

"A gay libertarian from Quebec"? Say it ain't so.

I think when a leadership race comes down to which candidate is the most homophobic, your party has a problem. Both men would prove time and again that it was a race to the bottom.

Not long after winning the leadership, Harper attacked MP Svend Robinson, an openly gay man, with the comment: “I am sure the picture of the honourable member of the NDP is posted in much more wonderful places than just police stations.”(Hansard No. 013, October 23, 2002)

When Day was leader of the Opposition he refused to send condolences to the Palestinian people on the death of President Yassir Arafat because party insider and former George Bush speechwriter, David Frum, claimed that Arafat had died of AIDS.

In a November 16 email to his Conservative colleagues Mr. Day stated: "Some of you have asked why I have not released a statement of condolence or sympathy. As you know, there are two sides to the Arafat story. You pick...." He then included in the email an article by David Frum, former speech writer for George W. Bush, indulging in unfounded speculation about the cause of Arafat’s death. Frum suggested that Arafat’s symptoms “sounded AIDS-like.” (5)

I think for Stephen Harper's new Fox News North, they should reenact some of these past leadership campaigns. They might actually get people to watch the show, if they can bill it as a sitcom.

4. In Canada, Free Speech Has Its Restrictions: Government Limits Discourse That Some May Find Offensive, By Steven Pearlstein, Washington Post Foreign Service, December 12, 1999

5. The Man Who Walks with Dinosaurs: The return of Stockwell Day, who now implies that people with AIDS deserve no sympathy, By Murray Dobbin, The Tyee, December 1, 2004
Posted by Emily Dee at 1:32 AM