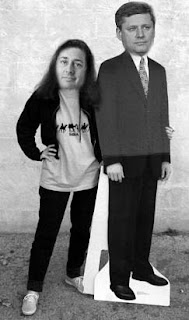 "I notice one provision of this bill; it's the only new provision, and this is dangerous. Some of you who have been around this House for a while will know this, and some in the cabinet must be concerned. The new provision eliminates the policy and priorities board of cabinet, effectively giving more control of government decision-making to the Premier's office. Well, we know who that means. That means Guy Giorno's got more power ...." James Bradly MPP St. Catherines, 1998 (1)

I started reading the book Bush's Brain: How Karl Rove Made George W. Bush Presidential, and it was like getting hit between the eyes with a brick.

Where had I heard this story before?

Well of course. They were describing Guy Giorno and Mike Harris. The criticisms that Americans had about the Rove-Bush duo were the same ones that were heard about the Giorno-Harris duo. But even more alarming, they are now the same criticisms of the Giorno-Harper duo. The only difference is that up until a few weeks ago, we didn't realize how much power Guy Giorno had.

Stephen Harper may not be a dictator after all. He's a cardboard cutout made to look prime ministerial. That's why he doesn't talk to us because if you got too close, you'd realize there's nothing there. He's an illusion.

And all this time, the media has been calling him a brilliant strategist, which never really fit. He's always been more an attack dog, than a thinker. Just like Mike Harris.

And reading a bit of the official transcripts from that session of the Ontario legislature, was like deja vu. How did we miss this? Giorno is not centralizing power for Stephen Harper. He's centralizing it for himself.

We need to be concerned about this, because he is not an elected official, and all of his actions are not based on what's good for the country, but how to get his cardboard cutout reelected. Next election we have to make sure that Canadians know who they are really voting for. A corporate attorney, who has been in more executive washrooms than Heidi Fleiss.

So no more lurking in the shadows. We need to make his, the most visible face in the country.

That Session of the Ontario Legislature Reveals Even More

What was being debated when Bradley realized that it meant Giorno would have even more power, was Bill 25, "An Act to reduce red tape by amending or repealing certain Acts and by enacting two new Acts."

This is a story about fanaticism and death. The dead are buried in fresh graves in the cemeteries of Walkerton, Ontario. The fanatics are very much alive, going about their daily business in the Premier's office and the cabinet room in Queen's Park ... Investigators are still working to determine exactly how deadly E. coli 0157 bacteria found their way into Walkerton's water in May, causing at least seven and perhaps 11 deaths, and leaving hundreds seriously ill. The story of the Walkerton tragedy is not, however, primarily a story about Walkerton at all. This was no unforeseen accident. It was the predictable - and predicted - result of deliberate policy decisions which gravely compromised the safety of Ontario's drinking water. The broader story of Walkerton is the story of repeated warnings, from many different experts, officials, and agencies, that the Harris government's environmental cutbacks were putting public health in jeopardy. And it is the story of how those warnings were dismissed ... (2)

And guess what was in the last budget? Yep. Canada now has a "Red Tape Commission". It will be like playing Russian Roulette every time you eat or drink anything.

Drawing inspiration from the way British Columbia and Ontario streamlined regulations, Flaherty announced the creation of a new Red Tape Reduction Commission, with a mandate to reduce the paper burden of complying with federal rules on small business in particular. Less regulation and freer trade are both well within Flaherty’s comfort zone. (3)

Now back to Ontario in 1998 (following emphasis mine):

The policy and priorities board of cabinet is the most important committee of cabinet. It is the committee that deals with the priorities for the government and the general policymaking for the government. Now that's taken out of the hands of the cabinet and I think that's going into the hands of Guy Giorno and the whiz kids in the back rooms of the Conservative Party ...

... Of course those who are still hopeful of getting into cabinet interject in favour of Guy Giorno and that crew, because they know that Guy is going to be checking off checkmarks for who's getting into cabinet ... I tell my friend from Brampton that if he wants to get into the cabinet, like his colleague, he should be good to Guy Giorno and Deb Hutton*. Deb's now been with the Tory caucus 10 years; celebrating her 33rd birthday in mid-August. She has all kinds of power.

All these people advise, so what I'm saying to the members of the Conservative caucus who want into the cabinet is, yes, be nice to Mike, laugh very loudly at the jokes, lead the applause when Mike speaks and gives an answer that zaps the opposition, but the most important thing is to ingratiate yourself with Guy Giorno and the whiz kids, because they will be advising the Premier on who goes into the cabinet, who gets shuffled one way or another ... you all thought he was being honest with you, being true to you, and now you find out that Guy Giorno is going to have even more power and all those people, the whiz kids in the back room, are going to have even more power. Some of them get elevated to the cabinet. I see that my friend Tony Clement, the member for Brampton South, has less power now that he's in the cabinet than he had when he was a whiz kid ... (1)

The bill passed and among the 'ayes' were Jim Flaherty, John Baird and Tony Clement, while those "Whiz Kids" continued to whiz all over Ontario for a few more years. We're still trying to scrub off the stains.

*Deb Hutton is married to Tim Hudak, the new Ontario neoconservative leader, who's being groomed by Mike Harris.