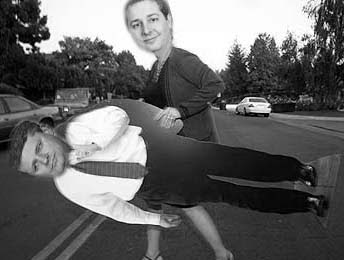 "This is an omnibus bill. This is a very extensive bill. It may not have blockbuster issues in it, but it has a number of provisions which affect almost everyone in Ontario

"There was a period of time that could have been allocated for that. But Guy Giorno, who runs the government from the back rooms, decided that he wanted to see rule changes in this House. You see, the House was working too democratically to suit the backroom boys and the government, the people who are impatient with the democratic process, the people who feel the opposition is just some irritant to be shoved out of the way, the people who believe that if there's any opposition out there, they must be misguided or misled people. They wanted to see the rule changes brought through the House instead of dealing with legislation." (1)

"In the dying days of the spring session, which started last January, by the way, and ended in June some time, I can well recall those of us in opposition saying, "Bring forward your legislation." But no, the government House leader of the day, Mr Johnson, was instructed by Guy Giorno and those who have the real control in this government to deal with changing the rules of the Legislature to grease the skids for the government to get its legislation through." (2)

"Any discussion with insiders about control from the centre quickly turns into a debate over the relative strengths and weaknesses of director of policy Guy Giorno, who was all of 29 when the Tories came to power. Nicknamed `Rasputin'...he is, some say, the ultimate insider, a right-wing true believer who sidelines any ministerial move that doesn't jibe with his ideology."

"I am concerned because I know many of the members of the cabinet, even some of the newer people. I am concerned when I see that nothing can get through without the thumbs up from Guy Giorno. I asked before, what riding does he represent? What constituency elected him? What group of people in this province elevated him to this position so that he can dictate to my friends who are in the cabinet? I am here on your side when you fight against the Premier's office.

"There is one I haven't mentioned, John Toogood: "The Premier's economic policy adviser, he was recently promoted to assistant director of policy. The Tory Youth graduate and Giorno protégé still looks too young to shave."

"There are lots of people in there, I guess, who have input and I think what's bad for our system, what's bad for our democratic system, is that these people are now in control of this government. My friend Al Leach, when he wants to bring something forward, has to pass it by the whiz kids. When my friend Noble Villeneuve, Minister of Agriculture, Food and Rural Affairs, whom I have known for many years, wants to bring forward an initiative, it's got to be approved by Guy Giorno and John Toogood." (3)

Mr. Malcolm Allen (Welland, NDP): "I believe it was Yogi Berra who said that it was déjà-vu all over again. The front bench opposite, the Conservative government, for the most part was the front bench in Ontario back in the 1990s when we would see things like this omnibus bill. We know the havoc that wreaked on the province of Ontario when we had all those omnibus bills under the previous premier, Mike Harris, and some of those members on the front bench, including the Minister of Finance who is in the federal government today. They did the same thing then that is being done today. They rammed things through because the provincial Conservatives had a majority government, and the province was the worst for it.

"What the federal Conservatives are doing today is going to make Canada the worst for it as well. The pieces that are in that omnibus bill that do not have anything to do with the budget are things that really should be debated before us today. Let me mention the things that are missing.

"What is missing is a pension increase for those seniors living in poverty. The Conservatives decided to talk about getting rid of the environmental regulations, instead of increasing the GIS so that seniors could live in dignity and live without poverty. There was no mention of that.

"I would ask the hon. member to comment on what he sees is missing here that really should be a budget item instead of all the other bits that make it an omnibus bill. I have to say that in large part this is very much like a trip down memory lane for me because I have been here before with a Conservative government in the province of Ontario, and interestingly, who was the chief of staff to Premier Mike Harris who brought in the infamous omnibus bill 26? Guy Giorno, the same chief of staff to the current Prime Minister." (4)

"Mr. David Christopherson (Hamilton Centre, NDP): Mr. Speaker, I appreciate the chance to comment on the bill. My colleague from Sault Ste. Marie is nodding his head. He remembers what went on when we had that bill. It was the same sort of thing. Bring in a bill that is meant to be one thing and then load it up with everything else that is problematic, that is going to involve a lot of debate, that is controversial and ideological. Just stuff it all in there and refuse to talk beyond the cover page. The government wanted it to go through. It was massive. It led to a major upheaval, which is putting it mildly, of our health care system. It brought in a massive review. It really set the stage for what became the dark years of the Harris regime in Ontario, years of governance which we are still trying to climb out of in terms of the damage that was done." (4)

"Oh, I heard all about it. I heard there was a lot of trouble because you didn't get Guy Giorno's permission to go on. That's what I heard Robert Fisher say, and you will recall that Robert Fisher was the person who asked the Premier during the 1995 campaign, in May, "Is your health care policy going to result in any hospitals being closed in Ontario?" The Premier said-you'll recall this quote yourself-"Certainly, Robert, I can guarantee you I will not close hospitals."

"So what is happening now is we're seeing an erosion of many public institutions and many public services. It is the agenda of the right wing, and I note for my friends on the government side that either today or tomorrow the Premier of this province will be speaking to that mainstream, Main Street organization, the Fraser Institute, which of course is as right as Guy Giorno, who runs this government. We will have a situation with the right wing now where they're endeavouring to destroy the confidence in public institutions so that people will accept radical changes they wouldn't normally accept." (3)

This new omnibus bill of Guy Girono's will be just as devastating to this country as his Omnibus bill was to Ontario. Once again this most famous fallen Catholic since Lucifer, will put seniors into poverty and drive as many people from their homes as when he carried around Mike Harris' cardboard cut-out.

And should it be any surprise that he is now using threats and intimidation to get what he wants? This fire breathing mammal is stomping his feet and threatening to bring the wrath of his new cardboard cut-out upon the nation.

I'd say pray for Giorno, but that man no longer has a prayer, and if this omnibus bill passes, neither will we.