"As long as we, as a society, continue to bury our heads in the sand, hope that all of this nastiness will just go away, ask "can't we all just get along," without getting up off of our apathetic asses, without turning off the damned TV, without allowing ourselves to be duped and hoodwinked by our so-called leaders - we are about as useless as windshield wipers on a cat's ass." Nicole Nichols

I love the above quote from an American blogger who is one of several tracking a new youth movement, that is being legitimized by the Republican Party in the U.S. and the Conservative Party in Canada.

It has been getting very little media attention, especially here, as they are all being treated as isolated incidents. Yet most can be traced to two places. The Leadership Institute under Morton Blackwell and it's Canadian counterpart, the Manning Centre for Building Democracy, who are both training political activists. Karl Rove and Rob Anders graduated from Blackwell's school, so that gives you some idea of what they teach.

But more than simply rabble rousing, many are becoming increasingly racist, sexist and virulently homophobic. Morton Blackwell is also a founding member of the Council for National Policy and of course Preston Manning from the Manning Centre is the founder of the Reform Party. His name is being tossed around as our next Governor General. A BIG mistake!

In the book, The Colour of Democracy, Racism in Canadian Society, the authors point to the Reform Party in particular. After suggesting that the (neo-Nazi) Heritage Front* is not as big a threat since they are small in number, and "...can to a certain extent be ignored ... such thinking is also evident in the doctrines of the Reform Party, who won a substantial number of votes in the federal election of 1993 and who hold 52 seats in Parliament." (1) One of those 52 seats, was held by a man named Stephen Harper.

Young Americans for Freedom was created in 1960, as one of the many anti-Communist organizations of the period, and aligned themselves with William F. Buckley. They opposed the civil rights movement, and, in 1962, gave their first annual Freedom Award to segregationist South Carolina Sen. Strom Thurmond. Though they supported Nixon they were never really partisan, preferring to simply be called conservative and later adopted libertarian policies.

On college campuses they were referred to as the 'Shock Troops', often challenging anti-war protesters, and as the new right wing, counterbalanced the "hippies" who were more prevalent during the period. YAFers wore ties and had trimmed haircuts, but their lapel pins were B-52 bombers in the shape of a peace symbol. Their activism was mostly described as "dirty tricks" and they dubbed themselves the "prankster truth squad".

In 1970 a member of the Young Republicans, who had been touring colleges in Illinois, met up with the YAFs and sought their help with a little scheme. A man by the name of Alan Dixon was running as a Democrat for state treasurer, and was planning a gala event to officially open his campaign office in Chicago.

The Young Republican, using a false name, posed as a supporter to gain access to the campaign headquarters, where he ran off with some official letterhead. With the help of YAF, he printed up 1,000 invitations for the grand opening, giving the correct time and place but adding "Free beer, free food, girls, and a good time for nothing".

They then fanned out and distributed the invitations to a hippie commune, at a rock concert, in a soup kitchen and among the drunks in the Chicago bowery. On the night of the event as guests all dressed to the nines were mingling with the upper class, van loads of the unwashed arrived, destroying the evening for many.

Dixon still won, but when George Herbert Bush, then on the Republican National Committee, got wind of it, he told the Young Republican to immediately go and apologize. But according to Dixon, Karl Rove never showed. It would not be the last time he discredited the party, and under another George Bush, a stunt like that would be child's play. 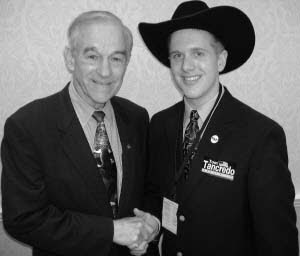 The photo to the left is of Kyle Bristow and Ron Paul. Bristow would become the leader of Young Americans for Freedom at Michigan State University, as the group, which had not been heard much of for some time, now took a new direction.

The Leadership Institute of Morton Blackwell and the Republican National Committee have taken them over and there are now more 20 YAF organizations on campuses across the country, most of them started in the past five years by Leadership Institute-trained activists.

One of them is Kyle Bristow who interned there for a summer, and instead of simple pranks, his activism included organizing a “Catch an Illegal Immigrant Day” a “Straight Power” demonstration to protest a proposed local civil rights ordinance protecting gays, lesbians, bisexuals, and transgender individuals from discrimination, with signs that read “End Faggotry” and “Go Back in the Closet.” He also administered two racist online groups — “True American Patriot” and “Jobs a White Man Won’t Do”.

He also arranged to have controversial figures like Paul Fromm, British National Party Chairman Nick Griffin, and other white supremacists speak on campus. And while such events drew protest, as he knew they would,Kyle believes all press coverage is good coverage, and while 10,000 people who read what he has to say will be disgusted, one or two will be intrigued. He’s using the media coverage to reach those one or two people at a time and that’s what concerns me about YAF, because what he’s articulating is dangerous.” (2)

But there is another reason for this, which I've mentioned in my other posts on the subject. It's something called 'Controlled Controversy' that is taught at Blackwell's training school. When you look at the headlines or heaven forbid, watch Fox (I've only seen the videos on Youtube), the news is always about the reactions, rarely if ever about what caused those reactions. That's how this works. You can get away with anything once you've achieved the reaction you desired in the first place.

Nothing Bristow* or any of the others do, is illegal, but it's troubling, as there is not merely an attempt to shift universities to the right, but also an underlying motivation to make racism, homophobia, etc., acceptable. And though these groups are clearly extreme, the only ones who have been given that handle are the ones who speak out against them.

Another youth group engaged in the same kind of activities, is Youth for Western Civilization, again under the direction of Blackwell's Leadership Institute. They have actually been legitimized by the Conservative Political Action Conference, and debuted there in 2009. Tom Tancredo also helps them out when they need to stir things up. Tancredo was a YAF when he was younger, and is now an outspoken critic of immigration and multiculturalism.

We need to be more diligent and tell university students to watch out for things like this. If their statements or actions are outrageous, they are intended to make you mad, and once you're mad, your reaction becomes the story.

Hate groups are definitely making a comeback in the Right-Wing revolution and are now main-streamed by the Republican/Conservative parties.

*The Heritage Front belonged to the umbrella group, the Northern Foundation (Stephen Harper was a founding member). Heritage Front leader Wolfgang Droege, was also a member of the Reform Party and was once their Ontario policy chair. He used his members to act as security for Preston Manning when he spoke in Ontario. According to Dr. Debra Chin, Harper himself arranged this.

**Bristow is no longer at MSU but is now considered to be an up and comer in the Republican Party.