The Press vs The People. How Canadians Lost Their Voice 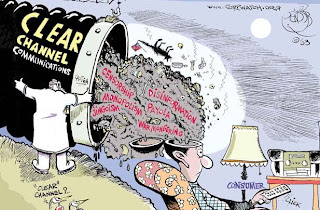 "The mainstream media in this country no longer represent the views of the majority of Canadians." Lawrence Martin

There was a story yesterday that Kory Teneycke will be leaving the CBC. But the real story is, what was he doing at the CBC in the first place?

Teneycke, a self described Reform Party activist. One of Preston Manning's "storm troopers" who used to go around to Liberal constituency offices to raise Cain. Who only recently left Stephen Harper's office, was working at our public broadcaster. The only place where we had a hope in hell of having our voices heard. But not to worry, he's moving to Quebecor Media Inc. where he will be responsible for the Sun media chain's Ottawa bureau. (1)

He used to write and approve Harper's press releases and now he's going to attempt to offer unbiased reporting on the Harper government. At least he won't have to risk being beat up by the RCMP for asking Harper a question, that he's already written the answer to.

They don't even try now.

In 1996, David Taras at the University of Calgary, wrote an article: The Winds of Right-wing Change in Canadian Journalism. In it he discussed a new phenomenon in the Canadian media; the increasing number of journalists who had become "ardent political activists". (2)

It was in reference to the Winds of Change conference that was taking place to try and unite the right wing parties under one banner.

The Winds of Change conference, which took place in Calgary in May 1996, brought together approximately 70 leading right-wing thinkers and activists in an effort to bring unity to conservative forces before the next federal election, expected in 1997 ...

... The conference's real significance, its real meaning, however, may have little to do with whether the goal of unity on the right is ever achieved. More important perhaps is that the conference highlighted a phenomenon that has been taking place for quite some time in American politics, but seems only now to be emerging full-blown in Canada: that an increasing number of journalists have become ardent political activists. Where objectivity was once the gold standard on which the professional credibility of journalists rested, today the rules seem to have changed. Some journalists have been able to enhance their status by openly championing partisan positions and causes. (2)

Pamela Wallin and Mike Duffy went right from CTV to be named to Harper's senate. Peter MacKay's fiance is an executive at CTV. Harper MP Lee Richardson's girlfriend is a journalist for CBC. David Frum, the organizer of the Winds of Change, is a regular contributor to the National Post and a former speech writer for George W. Bush.

The shift to the right started when Conrad Black bought up most of Canada's media in an attempt to shift public opinion to the far-right, but so far it isn't working. Canadians are still Canadians. A few right-wing hacks are not going to change that.

[Lawrence] Martin traced the change of the journalism culture in Canada to the mid-1990s, when Southam, the country's biggest newspaper chain with a history of hewing to a mainstream political course, was taken over first by Conrad Black's Hollinger Inc., and then by CanWest Global, which makes no secret of its pro-American, conservative bias. As well, the conservative tabloid Sun chain became Canada's second largest newspaper group in the last decade. The result was the establishment of two major newspaper chains to the right of the political spectrum, and none on the left or in the centre.

Further, Martin pointed out, the two national newspapers are major agenda-setters: the National Post is decidedly right-wing, the Globe and Mail conservative. At Madcan's magazine, Kenneth Whyte, former editor of the Post, runs the show, and L. Ian MacDonald, a Mulroney devotee, now edits Policy Options, once a liberal magazine. Even the publicly owned CBC gives prominence to right-wing voices. On Peter Mansbridge's "At Issue" panel on The National, regulars include Gordon Gibson of the Fraser Institute, Andrew Coyne of the National Post, and former Conservative pollster Allan Gregg; only Chantal Hebert, national affairs writer for the Toronto Star and a columnist for Le Devoir, represents a more liberal point of view. (3)

Chantel Hebert is our lone voice? I've quit watching this show, because on the last one I did see, they were discussing Michael Ignatieff, and while Hebert thought he could redeem himself, she went on to say that "even learning to tie his shoes will be an accomplishment." A man who got his PhD at Harvard and has taught at schools like Harvard, Oxford and Cambridge, and the best she could do was suggest that he still needed to learn how to tie his own shoes. And she is our ONLY VOICE? And forget them ever having anything nice to say about Jack Layton, Elizabeth May or Gilles Duceppe. Their tongues would catch on fire, I think.

... "The conservative media tends to favour a closer embrace of the United States and its values. Canadians themselves show little inclination to go that route. It is a story line — the press vs. the people — that runs right to the heart of the debate over the future of the country." Martin added that as a result of the corporate takeover of the Canadian print media, the largest segment of the population, centre-left Canadians, were at risk of losing their voice. (3)

The press vs the People. Very well put. In 2007, Frances Russel wrote for the Winnipeg Free Press:

Lawrence Martin has written several articles about the Canadian media's rightward migration. In a January 2003 column headlined It's not Canadians who've gone to the right, just their media, he quoted an unnamed European diplomat saying "You have a bit of a problem here. Your media are not representative of your people, your values." Too many political commentators are right of centre while the public is in the middle, the diplomat continued. There is a disconnect.

Martin believes the disconnect began when Conrad Black converted the Financial Post into the National Post, hired a stable of conservative commentators like Mark Steyn, David Frum and George Jonas, bought the centrist Southam chain and turned the entire package into a vehicle to unite Canada's right and retool the country's values to U.S.-style conservatism. Even further right rests the Quebecor-owned tabloid Sun Media chain. Mulroney was chairman of the board of Sun Media and sits on Quebecor's board. (4)

And speaking of Fox News:

CanWest's 'Global Sunday' bills itself as "Canada's number one current affairs talk show." But a lot of Canadians won't find their views reflected in the talk.

... The program's rightward tilt is not accidental. Indeed, Global Sunday's wider purpose may be to shift political discourse to the right. The model for this mission can be found on the Fox News channel and, in particular, the falsely balanced Hannity and Colmes debate show. This show pits the aggressive conservative Sean Hannity against the mildly liberal, often conciliatory Alan Colmes in a format "where conservatives outnumber, out-talk and out-interrupt their liberal opponents," as Fairness and Accuracy in Reporting explains the strategy.

Global Sunday follows the same formula, tilting sharply to the right. Progressive and left-wing perspectives on public policy issues are blanked out – they don't seem to exist in Global Sunday's world. Host Danielle Smith has a long history of advocating for the libertarian right. She started her career as an intern at the Fraser Institute, then launched the Canadian Property Rights Research Institute. This short-lived organization was sponsored largely by Alberta ranchers and its goal was to promote private property rights, opposing endangered species legislation and bans on smoking in indoor publicly accessible places.

Smith was a natural for this job, having written a turgid essay for the Fraser Institute titled "The Environment: More Markets, Less Government." She left the property rights organization in October 1999 to join the Calgary Herald as an editorial writer – perhaps they liked her Fraser Institute screed. (5)

Danielle Smith is now head of the Wildrose Alliance Party and will probably be Alberta's next premier.