Michael Ignatieff Has Nothing to Worry About. It's Deja Vu All Over Again 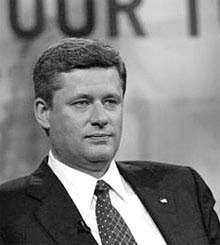 In June of 2005, Bourque News, the source for all political gossip, reported that there were some behind the scenes machinations to remove Stephen Harper as leader of the Reform-Conservative party and have him replaced by Ontario MPP, Jim Flaherty.

Bourque has learned that longtime Ontario Cabinet Minister and two-time provincial leadership contender Jim Flaherty may well be positioning himself for an early opportunity to unseat Stephen Harper, the disappointing Conservative Party incumbent, increasingly seen as a lame duck leader who’s political capital may well have expired .... Sources tell Bourque that failed retail heiress Nicky Eaton hosted a swish gathering at her country estate in Caledon for Flaherty’s intimates to discuss a bid for Harper’s job.

The Globe and Mail was reporting:

Political knives are out for Stephen Harper as his federal Conservatives sink deeper in the polls, and the sharpest weapons are being brandished by members of his own party. “There is a lot of discontent with the turn of things. People are saying it’s time to replace the leader,” said one key Conservative organizer in Toronto who, like many others, asked not to be named because it could hurt his status in the party.

... a recent poll puts the Conservatives eight percentage points behind the Liberals and suggests that six in 10 Canadians have a negative view of Mr. Harper, he can be unseated only if he decides to step aside. ... behind the scenes, party members from coast to coast are pointing fingers and asking why opinion surveys have the Tories battling for third place nationally when the Gomery inquiry into the sponsorship scandal should still be tarring the Liberals with the stigma of corruption.

Dissatisfaction with Mr. Harper’s leadership “started expanding with the Belinda [Stronach] defection and then it continued to expand when we didn’t get our [confidence] vote passed [on May 19] and a lot of people in the party are tired of waiting,” said one organizer, who also asked to remain anonymous. “This guy was supposed to be the answer, and, instead of being 20 points up in the polls which should be happening with the way things are in the Liberal Party, he’s eight points down in the polls. Like, what the hell?”(2)

And with Senator Eaton now lambasting Harper's attack on freedom of the press, maybe Michael Ignatieff's job is safer than Stephen Harper's. I mean Senator Eaton is the same Nicky Eaton who was parading Jim Flaherty around as a replacement for Harper.

And the Religious Right in Canada love Flaherty. Charles McVety has been a long time supporter, since Flaherty is a declared anti-abortion and just weeks before his "coming out" party, he spoke at a rally against same-sex marriage.

And so far he's given them everything they wanted: an end to a national day care plan, funding for religious schools, censorship. What more could they ask for? (A lot more, trust me, and he will be just as good as Harper at giving in to their demands)

No, Michael Ignatieff has nothing to worry about. The press may be questioning his future, just as they did Harper's in 2005, and his poll numbers are currently stronger. Harper had his party at 23% and his own rating was just 14%.